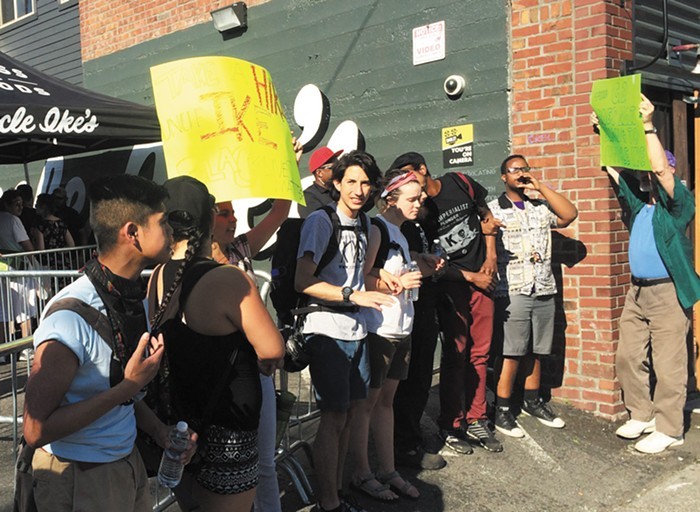 A protest at Uncle Ike's in April of 2016. The Stranger

The conflicts between Uncle Ike's owner Ian Eisenberg and his Central District neighbors are no secret. Eisenberg's flashy 23rd and Union pot shop has become symbolic of gentrification and resentment on a street corner where neighborhood drug dealers once sold their product at risk of arrest.

Eisenberg's controversial business and his relationships with his neighbors—including a local church—make up one dimension of the ongoing conflict. The fact that his flagship store popped up in a historically black, Jewish, and formerly red-lined neighborhood where residents are currently being priced out is another.

A video Eisenberg recently posted to his Facebook page shows another disturbing side of the trouble on 23rd and Union. It deals with Eisenberg's Jewish heritage. The video, uploaded on April 1, shows Eisenberg filming Omari Tahir-Garrett, a longtime Central District activist, as Tahir-Garrett tells Eisenberg to "go back to Germany" and "let them Nazis get on you again."

The 33-second video was made while, across the street from Eisenberg's store, an "anti-displacement block party" (others called it, simply, a protest) was taking place. The video begins with Eisenberg asking "Why's that?" to something Tahir-Garrett, walking along street barricades outside the pot shop, had said.

"Because them church people don't want you there," Tahir-Garrett says as his son, K. Wyking Garrett, ushers him away from Eisenberg's camera. "And you're not going to be here long, neither."

"What do you mean what's going to happen?" Tahir-Garrett, visibly angry, says.

"What's going to happen? You're going to go back where you came from," Tahir-Garrett says.

Tahir-Garrett continues: "Yeah, you're going to go back to Germany... Let them Nazis get on you again."

This isn't the first time anti-Semitic comments have been lodged at Eisenberg. Last September, Charles Mudede wrote about a Black Lives Matter march that wound down to 23rd and Union. During that march, one speaker—it was unclear who he was affiliated with—told Eisenberg via loudspeaker that it wasn't right of him to come into black neighborhoods, "especially when you're coming from Israel." The speaker then said that Eisenberg was former "IDF," or Israeli Defense Forces. To be clear, Eisenberg was born and raised in Seattle and has never been in the IDF. (As for Germany, Eisenberg says he's spent "two days, one night in Dusseldorf—does that count?" His family history doesn't include any German ancestry, as far as he knows. His great-grandparents, who were Jews of Hungarian and Russian descent, first moved to the Central District in 1907 and lived at 23rd and Cherry.)

This was Mudede's take on last September's events:

But the problem in all of this is not so much the speaker's apparent anti-Semitism, but that the crowd listening to his offensive speech—a crowd that's demanding racial justice from society—doesn't make it clear that such statements are unacceptable. (There are some rumblings but nothing definitive.) The fact that it was allowed to happen with apparently little challenge, no direct confrontation, and no outright denouncement is deeply troubling. It gives the impression that BLM activists or those who are sympathetic to the cause are cool with the zero-sum game of fighting racism with racism.

I reached out to Wyking Garrett, Tahir-Garrett's son who was with him during the confrontation, in the hopes of talking to him and his father. He sent me a long statement in response that doesn't directly denounce what Tahir-Garrett said, but alleges that Eisenberg circulated the video in a deliberate attempt to mislead people about organizations that Wyking and his father organize and participate in: Africatown, Black Dot, and the Umoja Peace Center.

I did learn, however, that aside from the long, ongoing conflicts around development on the corner of 23rd and Union, there's a more immediate context to the video. Earlier in the afternoon, around 2 p.m., a fight broke out between neighborhood activists and Uncle Ike's security.

The two sides tell opposing narratives about what happened. What's not debated: People at the event across the street from the shop were playing music and chanting, and Uncle Ike's Glass Shop turned the volume up on its loudspeakers in response.

Things escalated from there. According to the police report filed after the incident, Uncle Ike's security claimed that protesters were blocking the entrance of the driveway and that protesters assaulted security when they "attempted to escort them away from the entrance." Police also spoke to a witness who said the opposite: that Uncle Ike's security assaulted him. That person's friends also told police that Uncle Ike's security had punched another person in the face and that the person needed medical attention, but when the fire department arrived and asked to see the injured person, the group was unwilling to cooperate.

"We don't know if somebody was injured," Seattle police spokesperson Detective Mark Jamieson said. "Nobody was arrested. We wrote a report documenting what occurred. And that's it at this point."

I spoke to Eisenberg and an activist who was present during the confrontation, and both filled in more details of the opposing narratives. Eisenberg told me that whenever he goes out in the neighborhood, a couple of people start screaming at him and taking video of him, and that he decided to do the same thing. The activist, 31-year-old DJ Martinez, told me that it's Eisenberg who harasses and films the activists.

Martinez told me that Tahir-Garrett was upset about the person allegedly injured during the fight.

Eisenberg also told me that Tahir-Garrett has been making similar comments for years. Tahir-Garrett has a complicated history as an activist: In 2001, he hit former Seattle mayor Paul Schell in the face with a bullhorn and served 21 months in prison for second-degree assault. Earlier this month, protests broke out when Tahir-Garrett was evicted from his home at the UMOJA Peace Center. The eviction came after a long and complicated court fight with his landlord, who at times had allowed Tahir-Garrett to live on the property rent-free.

I asked Martinez what he made of Tahir-Garrett's comments.

Here's what he said:

Omari's been through a lot. No one is asking Omari what he thinks. He's an elder in our community, and I see these comments on these posts that are so toxic and are so telling of a lack of compassion. We don't send our elders to a nursing home because they say fucked up things (...) Omari doesn't give a shit about religion. I don't think he's anti-Semitic or anything like that. I think he's an elder with a lot of trauma and hurt. UMOJA was attacked and his things are destroyed. And when you have a smarmy guy like Ian Eisenberg turning his music up, it's triggering, and it's so complicated that it can't be narrowed down.

I pressed Martinez on whether he would denounce what Tahir-Garrett said, but he mostly dodged the question. And then I told him I had to be real with him: that while I understood the bigger context of the confrontation, I'm also Jewish and what Tahir-Garrett said was painful. Martinez told me he was just human, and processing a lot of complicated feelings. I am, too.

UPDATE: In 2013, Central District activist Omari Tahir-Garrett also told a man to go back to Asia.