Amazon Is Moving to Your City. Here's How to Survive. 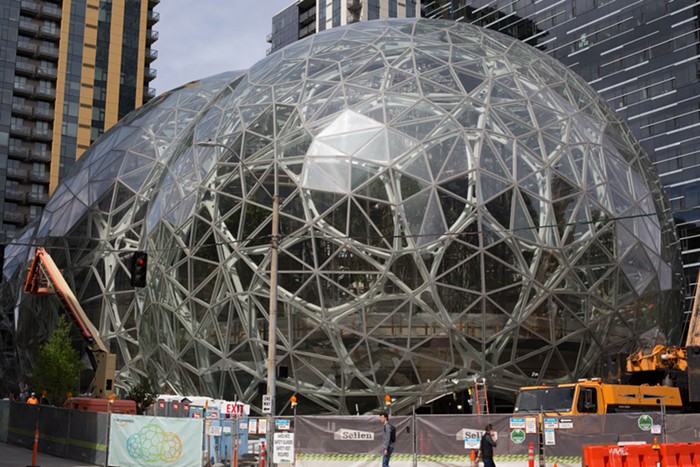 Congratulations! Your city has been chosen as the new home of Amazon.com. The tech giant has promised to bring at least 50,000 jobs to your town, and while this will certainly bring riches to some in and outside of your community (i.e., local politicians, the Chamber of Commerce, Jeff Bezos), if Seattle is any indication, not all residents will prosper equally in your new company town. Here's what you can do to ride this gravy train to the top:

Buy property. Once upon a time, baristas, bartenders, and self-described "artists" could rent in Seattle in exchange for a bag of weed and a few hundred bucks a month. Not anymore! Seattle rents have increased 57 percent over the last six years, with the average renter now paying nearly $2,200 a month—for a one-bedroom! Now, The Everything Store™ isn't entirely to blame for this (looking at you, State Legislature!), but the influx of tech money certainly has something to do with it. While this is clearly a problem for renters, it's great for landlords, who can kick out the old teachers, nurses, and writers for esteemed alt weeklies who formerly paid their mortgages, jack up the rent 1000 percent, and sleep soundly knowing that they've provided a home for those who truly deserve it in this world: computer programmers.

Invest in public transit. Seattle drivers spent an average of 55 hours stuck in traffic in 2016, making it one of the top 10 most congested cities in the U.S. Thanks Amazon! Since major investments in public transit typically take progressive local leaders, a city-wide vote, and tax increases, it will probably be a while before your transit system is up to snuff. In that case, you should invest in your own public transit: The Solowheel, the preferred vehicle for all Amazonians, available on Amazon dot com for a mere $599. Just don't forget your helmet!

Find a partner, and quick. Amazon doesn't just come with an increase in traffic congestion and cost of living, it also comes with a bonus gender disparity. That's right, folks: The dating pool is about to get a lot more competitive. In 2015, for instance, Seattle had a surplus of 38,000 single men—which, I suppose, could be a good thing if you're into dorky white dudes with lanyards around their necks. Hot!

If you can't beat 'em, join 'em. What Amazon wants, Amazon gets, and Amazon wants your town now. The only way to survive and thrive in your future economy will be to reap some of those sweet e-commerce dollars for yourself. So, to that end, we recommend A.) dropping out of your graduate poetry program and enrolling in code school; B.) starting a food truck and parking it outside Amazon HQ (Hot tip: Think nachos! Coders love toddler food.); or C.) cashing in your retirement and investing it in an Amazon stock or two. That should tide you over until Russian hackers take down Amazon Web Services and the world economy collapses.

Other than that, there's only one other option: Move. You cannot save your city, but you can save yourself. I hear Buffalo has a great arts scene.

Slog AM: White Center Burns AGAIN, Germany Has Had it With Merkel, and the Post Office Is About to Get Worse