Yes, there are spoilers.

Every episode of Room 104 is an invitation for disaster. HBO's latest from Duplass Brothers Productions is a series that offers half-hour vignettes of random eccentric characters who visit a single hotel room. Nothing about the room is special or magical—there are no beating hearts in its walls. Each episode has new actors. Storylines are unrelated. Room 104 is Room 104's only connective tissue, besides a predictable narrative structure (for more on that, read Kyle Fowle at Paste Magazine). The show trusts its viewers will be patient with its genre-jumping, which is sometimes successful (episode five, "The Internet," had me bawling) and other times tedious (I rolled my eyes throughout "Pizza Boy"). But a recent episode directed by Seattle's Megan Griffiths, "The Missionaries," is exceptional. It's gay. It's Mormon. And in a breathless thirty minutes, "The Missionaries" manages to be the best coming out story in recent TV. 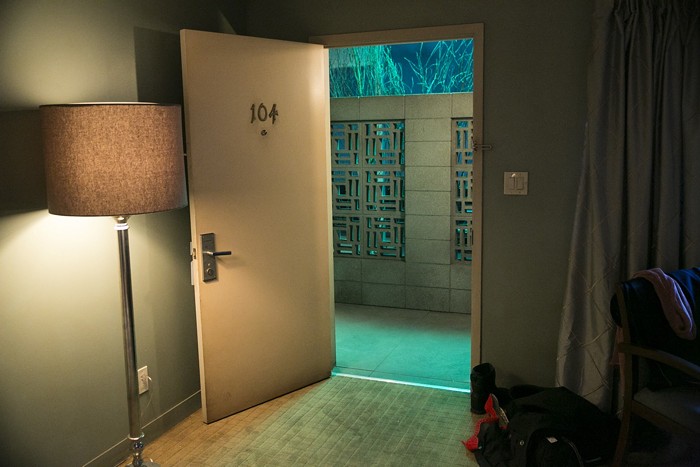 It's a room of sin. Jordin Althaus/HBO

What elevates this episode beyond gay cliché is Megan Griffiths' direction. Griffiths directs the characters of Joseph (Nat Wolff) and Noah (Adam Foster) to treat every decision with a good-heartedness that is uniquely Mormon. It's clear their world is filled with taboos. Even a swear word is a threat. Everything is dangerous, and so once they do one forbidden act it's easy to do them all.

"Heavenly father did not send us pornography as a sign.” OR DID HE!? Jordin Althaus/courtesy of HBO

When pornography accidentally plays on Room 104's TV, Joseph (as in Smith) interprets it as a sign from God urging them to indulge in sin so they may become better saints. He leaves Room 104 and returns with a shining six-pack of gas station beer. In LDS lore, the Angel Moroni reveals the Book of Mormon to Joseph Smith through golden plates, and so the color of Joseph's cans isn't a coincidence. The Miller cans are golden plates for a new gospel. Nervously, but with excitement, the boys sip the beer. They have a night filled with booze and porn. It's funny and earnest.

In the morning, Joseph arrives with coffee—another taboo drug for Mormons. There is guilt, uncertainty, and a fight. Someone is knocked unconscious. There is a resurrection that culminates with the elders having a renewed commitment to each other and their faith. “Shall we offer it up to Saint Augustine?” Joseph asks before lunging to do sex stuff with Noah, and then the credits roll while Father John Misty's "Everyman Needs a Companion" plays.

The boys' future is unclear at the end of the episode. Will they leave the church? Will they identify as gay? If they are gay, will they come out to others? It seems likely they'll exist as Jack Mormons—a slang term used to describe LDS church members who choose not to follow the church's strict moral guidelines. It can also be used for members who have left the church. (In Angels in America, Harper says she is a Jack Mormon and has the famous line: "Like jackrabbit...I ran.") But Griffiths' careful direction makes all of this uncertainty sweet. The boys know little about the world, and even less about themselves, but the revelations they have in Room 104 bring a new gospel to their lips. (That's a blowjob joke.)

If Room 104 hasn't been on your radar, now is the time to catch up.

4 Days in France Is a Beautiful, Directionless, Sexy, and Profound Trip