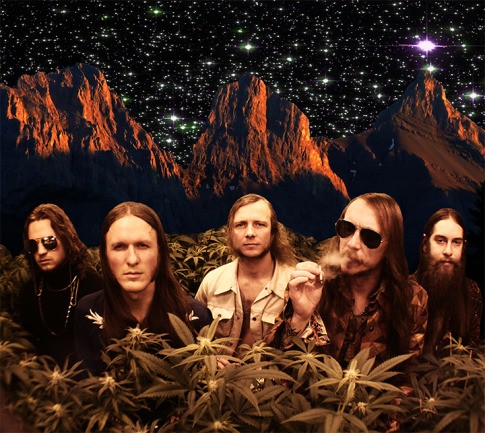 Black Pussy: "We accept all responsibility for the repercussions that our name brings." Made in China Records
Sponsored

Tucson-based stoner-rock/"boogie-pop" band Black Pussy—whose members, as you can see, are white men—were slated to play the Funhouse on Saturday, March 17, but that show is no longer happening. According to a February 26 post on the group's Facebook page, it was their decision to cancel.

However, El Corazon boss and Funhouse co-owner Dana Sims says, "I’m not sure what they are talking about exactly. The show was cancelled by the club on Saturday [February 24]. After some constructive discussions with people I love and respect both in the scene and the community at large, I felt it was the right thing to do."

Attracting much scathing criticism over the last few years for what many perceive to be their racially insensitive and objectifying name, Black Pussy have doubled down on their reasons for keeping the moniker. On their Facebook page, they deny that it derives from the original title of the Rolling Stones' "Brown Sugar," as some detractors have accused.

In a phone interview, Black Pussy frontman Dustin Hill admits that Sims "pulled the plug" on the gig, but he made that Facebook post to stress that he doesn't "want to work with people who are racist and sexist and not inclusive. That’s what they are, so since they’re pulling the plug on us, I’m pulling the plug on them, simultaneously."

When asked what exactly is racist about the Funhouse's decision, Hill says that, "The people attacking us personally about the Seattle show continuously call me ‘white’ and ‘male,’ and I shouldn’t play Seattle because I’m white and male. I think that’s some sexist and racist stuff. It’s my band name and because I’m white and male, I’m not allowed to have this band name. That’s it.

Does Hill not understand why people are upset about the name, or does he just not care about their reactions? "No, I don’t understand why people are upset with the name. The name is ambiguous, a multi-entendre. It’s art, and art is ambiguous—at least my art is. And it’s rock and roll, real basic shit. We’re just trying to have a good time. These identity politics… I don’t get it. It has nothing to do with my band."

Black Pussy, Hill claims, play about 200 shows a year, with about five per annum getting cancelled. "It’s a small percentage," he says, "but still, it’s someone fucking with my job. These people are bullies; they harass people. That’s why venues cancel—they’re getting threats. And the difference is, these venues don’t call the FBI or the cops. Instead of handling it within our judicial system, [club owners] just punish us.

"One person in Seattle kept writing us; she’s in the music scene herself. It’s hilarious to me. What are we, back in the ’50s or the ’40s, where we’re burning books or records? Elvis can’t do his thing? It’s the same shit over and over. It’s really sad that people are still this dumb. There are real issues in the world…"

While Black Pussy have had dates cancelled in America and Canada, so far no European promoters have nixed them. "Not yet," Hill says with a laugh. "Little Richard got cancelled. Elvis got cancelled. Slayer got cancelled. Sex Pistols couldn’t even tour the States under their name. [The Sex Pistols actually did tour the US; I recently reviewed a film documenting that experience, D.O.A.: A Rite of Passage.] What’s changed? We haven’t progressed at all. We’re still talking about race and sex, amongst us ants. Ants attacking ants. It’s just stupidity. I can’t be nice about it anymore."

Hill goes on to lament the attitude of progressives in the Northwest. "They’re eating themselves. I’ve lived in Seattle and in Portland for over 20 years. I left. I live in Tucson now. I can’t stand what has happened to [the Northwest]. My left[ist] team has gone off the deep end."

Hill's disappointment with the region extends to Sims, whom he say he's known for many years. "What can you do? There’s no support for rock and roll anymore. People shouldn’t be in rock and roll anymore if they’re willing to cave on issues like this. I was at a buddy’s store today. He sells Persian rugs. ‘Pretty soon you’re gonna be attacked for appropriating someone else’s culture and making money off it.’ Because that’s how far shit is going.

"I care about [progressive music fans], and they think I don’t care," Hill complains. "There’s nothing I can do anymore… they’re just insane to me. I’ve repeated this conversation over and over and I tried to be nice about it. ‘No, man, we’re the most inclusive band I know.’

"And out of every rock band I’ve ever played in, I have more black women at my shows and black men dancing, but people don’t see that in the Northwest because it’s so white. But down in the South—Atlanta, Savannah, New Orleans—my crowd is mixed. It’s hilarious to me. In the Northwest and in San Francisco even, it’s getting more and more segregated. It’s becoming the new South, in my opinion—but pretending to be all-inclusive, as they don’t include me," he concludes, laughing.

Kim Selling, The Stranger’s music calendar editor and co-author of the essay “Is Your Band Sexist, or Are Womxn Just Annoying?,” which ran in this paper last year, takes issue with Hill’s defense of his band. “If you make a choice that is rooted in white privilege and systemic racism and sexism, like naming your all-white-man rock group Black Pussy, you have to take responsibility for that choice."

She continues, "Reverse racism is not a real thing, and no one is oppressing you by telling you why you’re wrong or not booking your band or cancelling your show for having a racist and sexist name. In fact, those actions are accurate and measured responses to your initial choice. Free speech and the First Amendment being what they are, the judicial system cannot (and will not ever) 'punish' you, which is why your dumb ass is handled by the court of public opinion. If you’re fed up with being called out, here’s a thoughtful suggestion: Change your fucking band name."

Selling also disputes Hill's contention that “There’s no support for rock and roll anymore," noting that The Stranger's Things to Do calendar currently has 430 rock/pop shows— which is over 50 percent more than any other genre. "Rock and roll is here to stay," she says. "No one is trying to kill off an entire genre because of the offerings of one mediocre Zabriskie Point-is-my-spirit-animal bullshit nonsense desert-rock group."