Police Beat, and How Seattle Has Grown Since 2003

Seattle, 2003 Police Beat
The French New Wave director Jean-Luc Godard once said that "every fictional film is a documentary of its actors." This statement is true, but it doesn't go far enough. One must say that every fictional film is always a documentary. It's not just the actors who are moving in (or being sculpted by) time, but also objects, clouds, animals, and locations. For example, Police Beat, a fictional film I made with the director Robinson Devor (we also made Zoo), is also a documentary about a Seattle that's recovering from the dot-com crash of 2000 (a crash that sent Amazon's shares falling from nearly $100 apiece to $6—they're now around $1,500), and entering its first construction boom of the 21st century (between 2005 and 2008).

The current construction boom, which began in 2013, has completely transformed the city. Indeed, the city you see Police Beat, which is screening tonight at the Northwest Film Forum, along with a doc about NWFF by Criterion's streaming service Filmstruck, is dwarfed by the Seattle we now find rising all around us. Also, Seattle, which added 21,000 people to its population last year, has added a whole city, a whole Tacoma (220,000) to its population since the release of Police Beat in 2006. And if our population increases by 20,000 this year, which is very likely, then by the end of 2018 we will have an estimated population of 750,000. 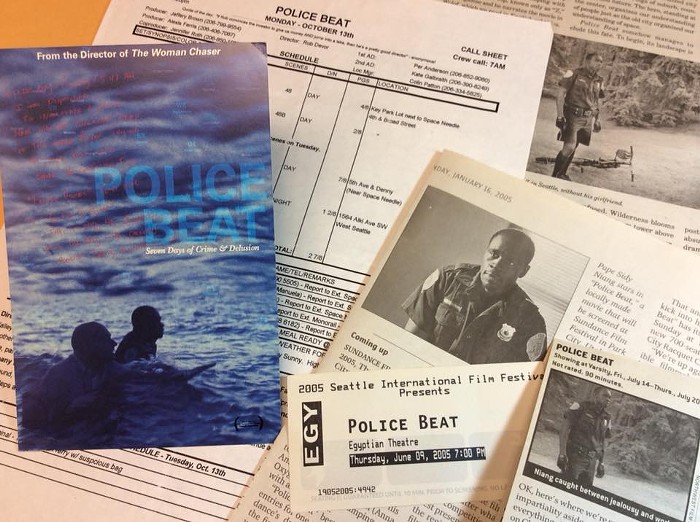 Seanjohn Walsh
There are no signs of this coming spectacular growth in the film. South Lake Union is flat. The Space Needle stands alone. Traffic seems not so bad. But the mind-boggling thing to grasp is this: no major transportation developments have occurred between the city we live in now and the city that my fictional film documented in 2003. When Link opened the game-changing stations on Capitol Hill and University of Washington in 2016, it still only had 20 miles of track. Vancouver, the most urban city in the Pacific Northwest, has 80. Even when the extensions to Northgate and Bellevue are completed in 2021 and 2023, respectively, our metropolis will still have less miles of track than Vancouver, a city whose area has a million fewer people.

Lastly, the hero of my film, the police officer Z (played by the beautiful but sadly late Pape Sidy Niang), could actually afford a little Seattle house on his salary (around $45,000). The median price of houses in 2005 was a lot (about $300,000) but not out of reach for a middle-class immigrant with a stable job. Today the median is over $757,000, and the growth of middle-class incomes has been stubbornly slow over the decade. We live in a society that fears wage inflation and the inflation of commodity prices, but is just fine with the inflation of CEO pay and financial assets—this fact is political, not economic.

If Z were around today, and still had the American dream in his Muslim heart, he would have to leave Seattle and find a home in Auburn or Sea-Tac.