Lawsuit: Seattle Police Knew Dangers of Blast Balls Before Using Them on May Day 2016 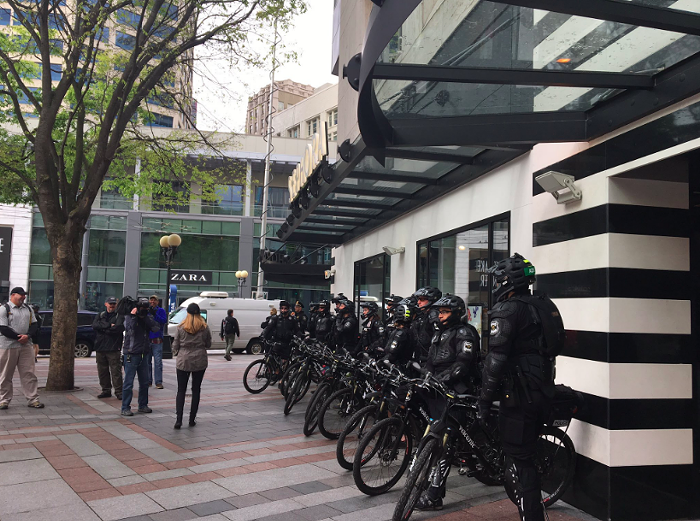 A scene from the relatively quiet May Day of 2017. Heidi Groover
Sponsored

Tomorrow, May Day, including Seattle's annual anarchist/antifa demonstration, is once again upon us. This year, we can probably expect the same news cycle that has followed May Days in years past: Is property damage violence? What's the point of this demonstration, anyway? And: How did the police respond?

A recent court filing in a lawsuit against the Seattle Police Department, however, may reveal new information about the risk that some police crowd-control explosives poses to protesters and citizen journalists during demonstrations like those on May Day. The filing claims the department knew about the potential dangers of explosive devices known as "blast balls" before a Seattleite was injured by one in 2016.

Still, despite a request from civilian advisors at the Community Police Commission for the department to stop using the explosives, Seattle police will have blast balls on hand at protests tomorrow, a deputy chief for the department confirmed during a media availability today.

May Day 2016 was notable for a couple of different reasons. First, there was the 33-year-old man who recently pleaded guilty to bringing and throwing unlit Molotov cocktails at the protests (one of which shattered and spilled gasoline, which ignited when an officer dropped a flash bang and lit up another officer’s pants, according to the US Attorney’s Office). Then there was software engineer Sam Levine, who was covering the protest as an independent blogger when a blast ball (a small rubber-coated grenade-like device designed to disperse crowds) detonated next to him and left a one-inch piece of shrapnel lodged in his cheek. Video taken by Levine appears to show the blast ball thrown from a line of police and detonating just inches away from his feet. Subsequent footage taken by others shows Levine on the ground, his face bloodied.

A month later, the Community Police Commission (CPC), asked that Seattle police suspend its use of the explosives. And in August, Levine sued the city, arguing that the use of force against him was unjustified. He, along with others, also filed a complaint with the Office of Police Accountability (OPA) over the department's use of blast balls that day.

OPA interviewed officers who said they threw the blast balls, but said they couldn't determine who threw the one that "caused concern for the complainants." For that reason, OPA dismissed the complaints the following year.

Now, lawyers for Levine are arguing the police used the blast balls despite knowing the dangers behind them. Levine and his lawyers claim that this knowledge speaks to the department's liability in using the blast balls in the first place.

According to e-mails that surfaced through the discovery process in Levine's case, former Seattle police chief Kathleen O'Toole asked independent experts to review the way the department handled demonstrations like May Day. One of those experts, Steve Ijames, the author of "less lethal" weapon policies for the International Association of Chiefs of Police (IACP), generated a report for SPD that was never published. (It's unclear why the report was not published. I've sent an email to the department asking why and will update this post if I hear back.)

Ijames' report, which was shared with SPD in April of 2016, largely praised Seattle police, and even stated that its training manual ahead of May Day 2016 was "the most detailed and comprehensive" that he reviewed. Still, Ijames recommended that SPD review its use of blast balls, and an early draft of his report stated: "Absent a situation where officers were facing the immediate threat of death or serious physical injury, the intentional deployment of a blast ball device at or in close proximity to a human being would be unjustified, excessive, and dangerous." (Later edits to Ijames report simply stated that intentionally detonating a blast ball unreasonably close to someone would "not be justified.")

Ijames continued: "It is important to note that blast balls contain the same explosive payload as a noise/flash diversionary device, are registered as destructive devices with the Bureau of Alcohol, Tobacco, and Firearms (BATF), and are fully capable (as warned by the manufacturer) of causing death or serious injury if ignited against or in close proximity to a vital body part."

Ijames' edited report found that he was satisfied with the department's blast ball training prior to 2016 May Day. The concern, he wrote, wasn't that SPD didn't have the right blast ball training, but about what happens when training or procedure wasn't followed.

"A review of open source photographs and video of the 2015 event clearly indicates that some blast ball devices were deployed in a manner that resulted in them igniting in close physical contact with citizens," Ijames wrote, "which if intentionally done is in conflict with training and contemporary police practice."

SPD, he wrote, should be prepared to review the rationale for throwing blast balls during May Day 2016, which officers threw what, and the outcomes of those decisions. Ijames reiterated that "impact projectiles" like blast balls are potentially lethal, and "have been involved in a disproportionate number of accidental/unintended serious injuries," particularly in moments of public disorder.

Ijames and Seattle police did not immediately respond to a request for a request for comment about Ijames' unpublished report; a spokesperson for the city, however, said that the city would respond to Levine's motion next month.