What the Fuck Is Wrong with Jeff Bezos? 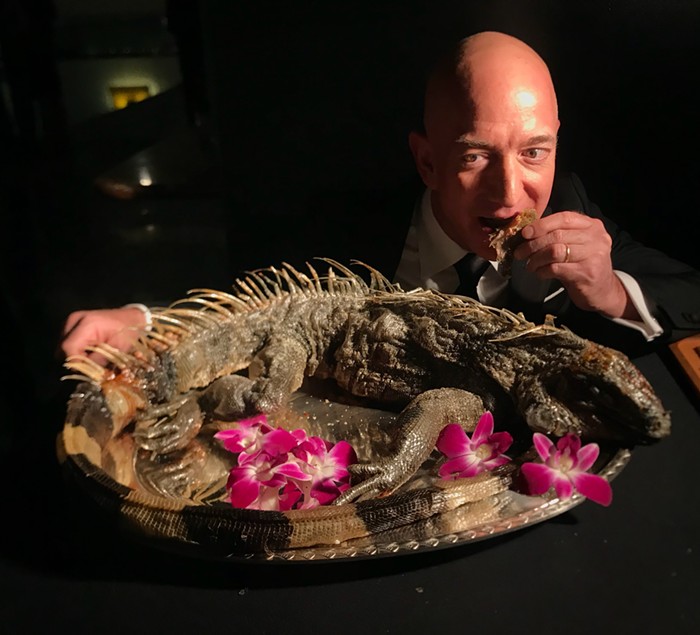 Jeff Bezos is the kind of rich person who leaves everything to his dogs. On Wednesday, Amazon halted construction on a new tower in downtown Seattle until the City Council votes on a proposed employee head tax to fund housing and services for people who are homeless.

In other words, the World's richest baby threatened to take his ball home if the city of Seattle doesn't do what he wants.

There are some legitimate reasons to oppose the head tax. As written, it would require all businesses with a net revenue of at least $20 million a year to pay the city 26 cents per hour per employee, and then, beginning in 2021, that system would be replaced with a 0.7 percent payroll tax. Now, I'm all for taxing big business, especially in states with no income or capital gains tax like Washington, but in this case, some small business owners are arguing that the $20 million cap would unfairly disadvantage them. Twenty-million in revenue sure sounds like a lot, but some businesses with $20 million in revenue also have high overhead—businesses like grocery stores and restaurant groups—and it's hard to see how taxing those companies (who are then going to pass that cost on to customers) is good for the city.

But Amazon isn't a small business. Amazon is a mammoth. In just the first quarter of 2018, their revenue was over $50 billion dollars. Sure, the head tax will cost them, but so fucking what? Seattle is unaffordable to basically everyone who isn't in tech. Middle class people are losing their homes. Poor people are living on the streets. The proposed head tax would bring in an estimated $75 million to help these populations survive; Jeff Bezos makes $3,182 every second. Seventy-five million could fall out of his pocket and he wouldn't even notice.

Döpfner: Last week we had Bill Gates for dinner here and he said in a self-ironic manner that he has a ridiculous amount of money and it is so hard to find appropriate ways to spend that money reasonably and to do good with the money. So what does money mean for you, being the first person in history who has a net worth of a three-digit amount of billions.

Bezos: The only way that I can see to deploy this much financial resource is by converting my Amazon winnings into space travel. That is basically it. Blue Origin is expensive enough to be able to use that fortune. I am liquidating about $1 billion a year of Amazon stock to fund Blue Origin. And I plan to continue to do that for a long time. Because you're right, you're not going to spend it on a second dinner out. That's not what we are talking about. I am very lucky that I feel like I have a mission-driven purpose with Blue Origin that is, I think, incredibly important for civilization long term. And I am going to use my financial lottery winnings from Amazon to fund that.

WHAT THE FUCKING FUCK, JEFF BEZOS??? THE ONLY WAY TO SPEND YOUR MONEY IS SENDING IT TO SPACE???? Please, excuse me for a moment while I go burn my Prime membership. (Just kidding. I use my dad's.) Here's one way Bezos, who has yet to make any significant philanthropic mark on the world, could spend his 130 billion dollars: PAY THE FUCKING HEAD TAX. Or buy every homeless family in Seattle a goddamn house. Or maybe take a cue from your neighbor Bill Gates and spend your fortune ridding the world of Malaria or working to end poverty in the U.S. There are so many options! You could save the oceans or fight climate change or cure cancer or pay your warehouse workers more or buy robot dogs for every elderly person in America. YOU COULD DO ANYTHING BUT SPACE TRAVEL, JEFF.

I don't know what happened to make Jeff Bezos so incredibly myopic. But if you're friends with the man, a request: Invite ol' Jeff over to dinner one night. Maybe tell him the menu will be iguana, with a light side salad. And then, after he arrives, introduce him to the evening's other special guest, Seattle's Socialist City Councilmember Kshama Sawant. It's at that point that you're going to need to lock the doors (from the outside), and let Sawant talk. She'll try to convince Bezos why Amazon needs to pay the head tax and why he personally needs to get his shining head out of his ass and start using his wealth to help people other than himself. This will not work. But the goal isn't to convince him; it's to bore him until he agrees to do it. It's not bribery; it's not blackmail. It's Jeff Bezos doing his goddamn civic duty for once.