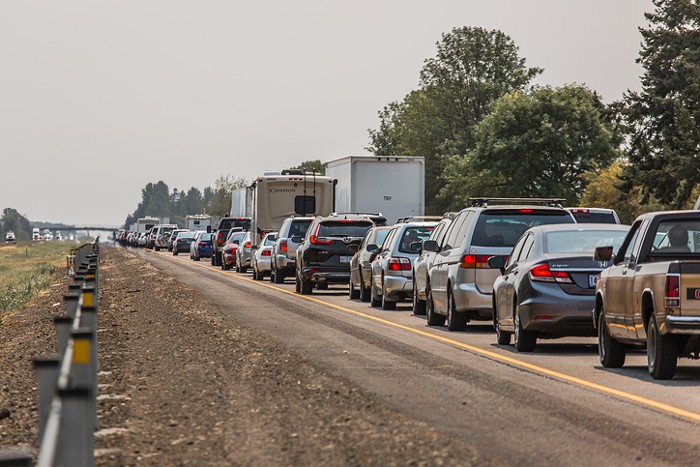 who did this Jorge Villalba / Getty Images
Usually, traffic in Seattle is pretty bad. Congestion is expected at certain hours of the day and it's expected to get worse as new construction projects spring up around the city. But, on a typical day, it's nowhere near Los Angeles-bad. It's not even San Francisco-bad. However, there are certain days when Seattle's traffic is an unparalleled hell scape.

These are the days when a big truck upends and sends its cargo flying onto major interstates. This happens fairly often. Traffic gets backed up for miles as crews try to fix the truck and clean up the mess. Compiled below are the weird things that have made their mark on Seattle's pavement. They are responsible for hours and hours of bumper-to-bumper traffic.

A Salmon Offering To The Seattle Gods

Tragedy struck in March of 2015 when a fish truck toppled on Highway 99 and completely blocked all the southbound lanes. Seattle was gridlocked, but the Alaskan Way Viaduct was covered in Seattle’s lifeblood — salmon. Officials didn’t know whether the fish was frozen or fresh when the truck crashed. Jury's still out on what the gods will give Seattle for this glorious offering. A Sounders game was starting at nearby CenturyLink Field and Stefan Frei, the goalie, was caught in the traffic jam. He ditched his car and booked it to the field to make kick-off.

Literally one month later another spill occurred. In April 2015, on the northbound I-5, a semi truck couldn’t quite make the sharp turn on the off-ramp and overturned. From its depths came a swarm of 14 million bees. Their hives coated the freeway. Beekeepers arrived on the scene an hour after the 3:30 a.m. crash. That’s right. Beekeepers were awoken from deep slumber in order to wrangle a cascade of angry bees strewn across Seattle’s arterial roadway. The sunlight came and it fueled the bees as if they were tiny little photosynthesizing nightmares. Firefighters showered them with water and foam. Eventually, the site was cleared and 128 out of the 448 hives were saved. The truck was on its way to California where the bees were going to pollinate some almonds.

Wow, 2015 was a rough one. In May 2015, a truck carrying animal carcasses spilled its burden onto the southbound I-5 near Boeing Access Road. The roads were only temporarily blocked but the stench stretched for miles. "The smell is terrible. Very bad. Very, very bad," said Trooper Freeman with the Washington State Patrol to KOMO at the time. "One of the Department of Transportation guys coming down here could smell it from the Ship Canal Bridge." Don’t you love the smell of rot in the morning? The worst part is this happened before. In 2001, a truck carrying dead animals lost its load — including two dead cows — on I-5 near NE 65th Street.

Highway 99 and seafood go together like, uh, oil and water. Get it? We’re talking about spills. Nearly a year later, in April 2016, a semi truck hauling a load of frozen seafood overturned. The viaduct was crawling with quickly-thawing frozen King Crab legs. There was an hours-long closure of the northbound lanes. Drivers were likely very crabby.

Just a few days after the crab spill, a deluge of human dung leaked out of an overturned truck on an I-5 off-ramp. The roads were like the aftermath of an enema, an unsanctioned colonoscopy. It was a feces fiasco, a maelstrom of manure. The truck was supposedly heading for a sewage treatment plant.

On I-5, in the heart of downtown Seattle, a propane tanker truck overturned. It was winter. It was snowy. It was February 2017. We all know how Seattle drives in the snow. Pair that with the crash and you have a parking lot on the southbound I-5. Traffic was abysmal in the entire city as crews slogged to remedy the situation. They had to transfer the fuel from the overturned truck into an empty, not-dangerous tanker truck before they could get the first truck back upright. The freeway was closed in both directions for eight hours.

I-5 has been like this for at least 4 hours now #SeattleTanker pic.twitter.com/Ypf89owbzQ
— Lee Rosenberg (@Lee_Rosenberg) February 27, 2017

Did Anyone Yell "Timber?"

A van abruptly changed lanes. A semi truck tried to avoid it by swerving. The lumber it was carrying fell onto I-5 South near Yesler Street. Two other cars were involved in the crash. There were no injuries. The lumber proved to be an ordeal to clean up. It was several hours before the road was clear. That was in May 2018.

UPDATE The semi involved lost its load of lumber. Our IRT crews are on-scene now and are working to clear the debris from the lanes. Aid is on-scene. Use SR 99 as an alternate route or take SR 520 to SB I-405 to get around downtown Seattle. pic.twitter.com/y0Iq7XWlyH
— WSDOT Traffic (@wsdot_traffic) May 2, 2018

A little bit later in May, about 40,000 pounds of chicken feathers flooded I-5 in Federal Way. There were about 18 million feathers. That’s the amount of feathers from about 2,300 chickens. The driver fell asleep at the wheel early this morning. His truck rolled. The smell of wet chicken was pervasive.

These chicken feathers not only crossed the road, they blocked it! Clean up on I-5 in Federal Way still going on. Truck crashed. Nobody hurt. Driver says he fell asleep. Updates right now on #komonews pic.twitter.com/I0bRXTaTFa
— Theron Zahn (@TheronZahnKOMO) May 23, 2018

What will grace the roadways next?

UPDATE: Friday, April 12. Hello, it's been almost a year since I compiled this post. Since then, a lot has happened, a lot has spilled, and the Washington State Department of Transportation even lowered the speed limit on a curve of I-5 in Tacoma to try to stop these goddamn semis from toppling over.

Handle with Care
Okay, so this one happened in Bellingham, but that's basically the same thing. In June 2018, a semi-truck carrying GLASS rolled over on I-5, sprinkling shards of glass on the asphalt. All the responding officers made sure to wear shoes when cleaning up the crash. Traffic was backed up for five miles. It was a whole thing.

Laying Pipe
PVC pipes littered I-5 in Tukwila when a semi truck goofed up on a freeway interchange. The truck was speeding while heading south. It took the curve too fast. Cue a classic topple and roll. The driver was fined for the mess. Those pipes look heavy.

No Use Crying Over It
I-5 south of Seattle in November 2018 was not a place for the faint of heart or the lactose intolerant. A semi carrying bags of powdered milk collided with a FedEx truck. The milk bags (not a euphemism for breasts) split open and drenched the freeway in the stuff. The slippery, wet road contributed to the crash. It probably complicated the cleanup.

A Contemporary Jackson Pollock
The hits keep coming. In the first week of April 2019, a semi truck headed to Sea-Tac Airport overturned on an exit ramp. Its contents poured out: paint. A whole lot of paint. It drenched the offramp. It was a piece of interactive in-your-face performance art no one asked for.

#Tukwila: A collision is blocking the southbound I-5 ramp to westbound SR 518. If you're headed to the airport this afternoon/evening you'll need to find an alternate route and give yourself extra time to get there. SR 509 is a good option at the moment. pic.twitter.com/ppLtdBe0PF
— WSDOT Traffic (@wsdot_traffic) April 7, 2019

I'm Certain No One Yelled Timber This Time Either
An Everett crash stalled the morning commute Friday. An on-ramp was covered in splintered saplings, pieces of plywood, and leftover lumber. It was a real waste of wood if you ask me. It was like a man-made beaver dam (some may call this "just a dam") that blocked the on-ramp for hours. There was no way over or around the trench of timber.

#Everett update: Here is a visual of the collision blocking the SB I-5 on-ramp from Pacific Ave. This collision is also blocking the right two lanes of SB I-5. Expect delays this morning. pic.twitter.com/9UsCa3KyMa
— WSDOT Traffic (@wsdot_traffic) April 12, 2019

Now, we must lay in wait for whatever future substance graces our roadways.