The Death of the Public Spirit in Seattle's Elite

Harbor Steps Charles Mudede
I just want to put this idea out there. Seattle is going through a lot of changes, and some of these changes are hard to track or to confirm with the data that's available. A change of this kind, the elusive kind, is, in my opinion, this: the elite of today are less public spirited than the elite of old. An excellent example of my meaning of elite public spiritedness is the Harbor Steps. It was developed by a civic-minded member of the rich Bullitt family, the late Stimson Bullitt.

The project incorporated the ideas of iconic European architects who, at some point or another, entered and exited the project—Mies van der Rohe, Richard Rogers. And, most importantly, it was inspired by a European sense or ideal of public space. Stimson Bullitt wanted something like Rome’s Spanish Steps to be the heart of his mid-sized American city. And in many ways, Harbor Steps realized this vision: it’s democratic and popular and functional.

Bullitt’s self-education in architecture led him to envision a dense residential project clustered on two axes: the major one a steeply stepped plaza, not unlike the Spanish Steps in Rome, serving as an urban, egalitarian gathering place of residents and downtown workers—embodying the very concept of civitas, according to Bullitt. 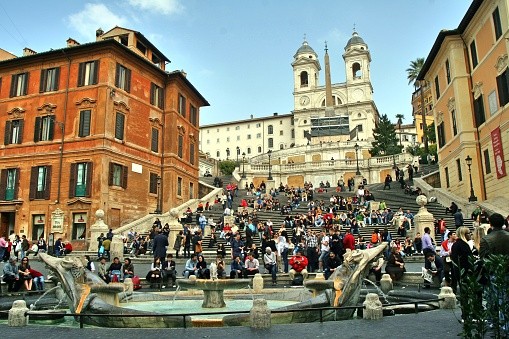 "Romans and tourists sit on the Spanish Steps in Rome." PR-PhotoDesign/gettyimages.com

True, the Harbor Steps is now the heart of some of the most expensive properties in this state, if not the coast. (In that respect, it is a lot like Manhattan's High Line.) Two-bedroom Harbor Steps apartments have been listed for $5,000. And so we have this contradiction: Few have the means to live right next to an area whose egalitarian principles and values are the opposite of those that make housing unaffordable. Nevertheless, the steps represent a kind of public spirit that we find in institutions like the Hugo House, Town Hall, Wave Books, the very new Gramma Books, and the former Bay Press. If you look into these cultural ventures and projects, you will find people like Stimson Bullitt, people who are from old or family money, or Microsoft money, which is now also old money.

My thinking is that the elite of the richest Seattle that Seattle has ever known, the Seattle of the Third Boom, have a very weak sense of the civic. My thinking is that this feeling appears to be in decline with the current elite. We are not seeing the Harbor Steps as the spirit of the educated elite, but the destruction of the Amazon Tax. I'm just putting that out there. I also want to point out that the public spirit of old was not without its problems. It was Eurocentric. The children of the elite would go to the top colleges in the East and to Europe, and return to Seattle with a vision of culture that was very European and drawn from the high culture of its intellectual and artistic classes. But what structured their institutions and ventures and architecture was, nevertheless, an idea of the civic.