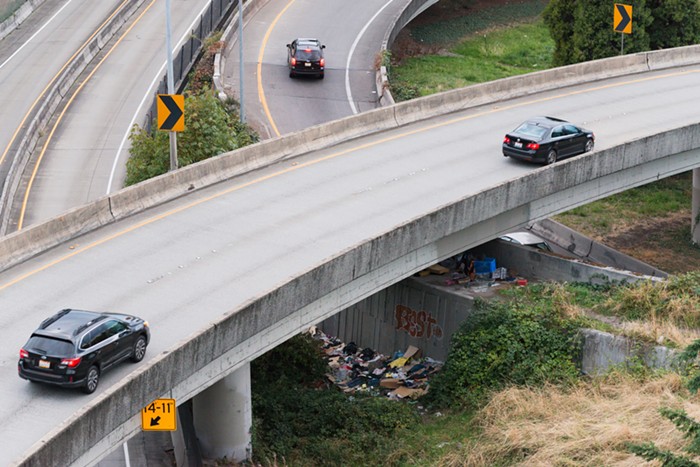 400tmax/gettyimages.com
There is an interesting correction at the end of Dae Shik Kim Hawkins's story in The Atlantic, "An App for Ejecting the Homeless." (This informative and compelling piece of writing complements The Guardian's equally informative and compelling piece, "Is Bezos holding Seattle hostage? The cost of being Amazon's home.") The correction concerns the status of the writer during the city's sweeps of homeless encampments he observed and reported on: He was not, we are informed, a journalist but an activist.

Why was this correction made? I did a little digging and discovered that someone who works for the city contacted The Atlantic and told them that the story was "misleading" because the writer did not identify himself to the city officials removing homeless people as a journalist, but as a member of Seattle Peoples Party, a political organizer, and an activist. It's clear that the goal of the City of Seattle, which Jenny Durkan now runs, was to discredit the writer and, therefore, an honest piece of writing. The City of Seattle even likened "An App for Ejecting the Homeless" to pamphlets handed out by the Seattle Peoples Party. What does all of this look like? The City of Seattle doesn't want to do anything meaningful about the crisis, but it does not want to look bad or heartless. It wants good PR.

Speaking of which, I contacted Durkan's PR person—a certain Stephanie Formas—about the matter and learned next to nothing. She claimed the office did not contact The Atlantic, and that she could say this because it's what she knows about the matter (nothing), and what she knows (nothing) is the final word (nothing happened at all), as far as she's concerned. Suggesting that she checks to see if anyone in the mayor's office contacted The Atlantic had the same effect on her as suggesting that the Queen of England travels in 4th-class coach. No progress was made. I gave up. I recommend you read Hawkins's story.

Being homeless is not a crime, but apps like t https://t.co/pVCVeJ5aUy his one are allowing housed residents to treat homeless folks as less than human.
— National Homeless (@Ntl_Homeless) July 5, 2018

Final words: One, the professional journalists I spoke with about this situation think that Hawkins should have made it clear in the piece that he was an activist (I personally think it's irrelevant because in this case—and considering the acuteness of the crisis—the story is much more important than the writer). Two, a source informed me that Formas does not much care for anyone who doesn't work for the Seattle Times. That's the word on the street.
Sponsored