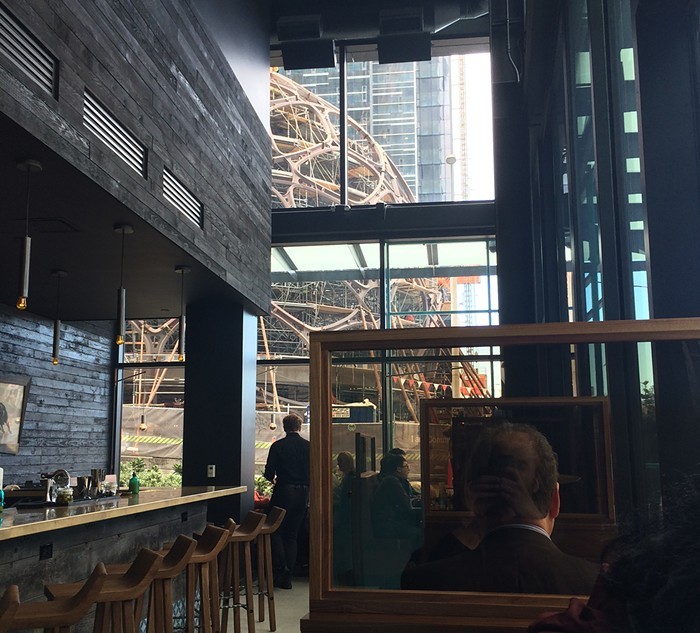 Bar Noroeste Angela Garbes
Local celebrity Chef Josh Henderson sold half his restaurant empire this week a day before he agreed to pay $1 million to hundreds of workers his company allegedly defrauded time and money from.
Sponsored

Henderson's company, Huxley Wallace, announced yesterday that they had sold nine restaurants to fellow celebrity chef Renee Erickson. The list includes Westward, a fancy seafood restaurant with its own dock on Lake Union, as well as seven locations of Great State Burger and the Saint Helens Cafe.

A day later, a King County Superior Court Judge approved a $1 million settlement for over 600 employees, according to the attorney who filed the case.

Henderson told me that his restaurant sale was not related to the $1 million settlement.

"That had nothing to do with it at all," Henderson said. "I wanted to simplify my life and spend more time with my boys. I just wanted to down tempo a little bit and focus more on spending time with them. And also own Huxley Wallace 100 percent and be able to do smaller more unique projects on a one-off basis on my own."

Marc Cote, one of the attorneys that brought the lawsuit, said the average payout would be $1,000, with some employees receiving as much as $13,000. The lawsuit alleged that Henderson's company violated the law by depriving employees of legally required breaks and obscuring how a 20 percent service charge was being distributed to staff members.

Henderson's restaurants instituted the service charge in 2016 in place of tipping. Henderson told me the move was to help provide workers with a living wage and health benefits as well as give the kitchen staff more equitable pay. Attorneys for the employees allege that the restaurant group was only distributing about half of that service charge directly to employees, breaking the law by not disclosing that fact on each menu and receipt.

Henderson disputed Cote's analysis. He said the service charge was being used to pay for healthcare and other benefits in addition to a tip, meaning employees received over 90 percent of the service charge's amount.

"They were receiving all of it, there was no part of it that was a profit center for us," Henderson said. "I will swear on a Bible on that."

Henderson and his company were not found guilty of breaking any laws, as the lawsuit was settled before it went to trial. Cote said a judge gave preliminary approval to the settlement in May of this year and gave final approval on Friday.

Henderson is the creator of the popular Skillet chain of upscale diners, although he sold those restaurants in 2013.

The other claim in the lawsuit alleges that Henderson and his company were depriving workers of legally required breaks and meal times.

"These are types of issues that I think are common in the restaurant industry. Because of the pressures of the job a lot of the employees are not getting the rest breaks that they are entitled to under the law," Cote said.

Henderson disputed that his employees were deprived of breaks.

"That goes against any philosophy or general decency that I would expect out of a company that I have," Henderson said. "There is no part of us that would want someone to work beyond what the law provides or what they physically can do. You don’t get anything out of someone by overworking them."

Henderson, who is personally named in the lawsuit, said he was confident a trial would have vindicated him and his company.

"The legal system we have doesn’t have anything to do with logic or if we are right or wrong, it has to do if you are willing to play the legal game and risk everything you have or are you going to settle and move on," Henderson said.

Cote said it's unusual for service workers to file lawsuits like these because they are afraid of losing their job.

"People just aren’t willing to come forward, but when employees do come forward and have valid claims I think they can find success because we have great employee laws in this state that are very protective of workers," Cote said.