Study of Seattle Crows Finds Some Have Sex With the Dead 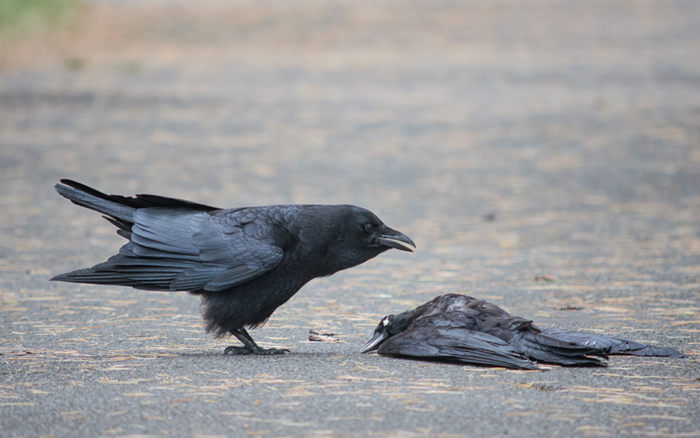 If you've seen a strange woman wandering around your neighborhood with a pair of binoculars and a stuffed crow, it might have been Kaeli Swift. Swift, a PhD candidate and bird researcher at UW, is the author of a new study on the bizarre sex lives of crows... and I do mean bizarre.

Crows, Swift documented, have sex with their dead.

In 2015, Swift, along with UW professor John Marzluff, was working with a film crew to document crow funerals as part of a story about Gabi Mann, a then-eight-year-old Portage Bay girl who became famous after stories of crows bringing her "gifts" (i.e., trash) in exchange for food went viral. (Mann's family, by the way, were later sued by her neighbors, who claimed feeding crows was turning the neighborhood into a zoo. They ended up settling out of court.) While they were filming, Swift put a taxidermied crow on the ground near a cherry blossom tree, hoping to attract other crows who would perform corvid funeral rites for the dead.

Swift wrote about what happened next on her blog (and which I first read about in this excellent story in The Atlantic): "After only a few moments of waiting, the first crow arrives and alights on the tree, its head cocking around to get a better look at the lifeless black feathers beneath it. I hold my breath for the first alarm call, ready for the explosion of sound and the swarm of birds that will follow it. But it doesn’t come. Instead, the bird descends to the ground and approaches the dead body. My brow knits together in surprise but, ah well, I think, the shots of it getting so close and then alarm calling will make good footage. The audience will have no questions about what it is responding to. To my continued surprise, however, the silence persists; only now the crow has drooped its wings, erected its tail, and is approaching in full strut. No, no, this can’t be, I think. But then it happens. A quick hop, and the live crow mounts our dead one, thrashing in that unmistakable manner. 'Is it giving it CPR?' someone asks earnestly. Still, in disbelief, John and I exchange glances before shaking our heads and leaving the word 'copulation' to hang awkwardly in the air."

Swift, naturally, was intrigued. Crow necrophilia had never been documented in the scientific literature before. She started her field research soon after, and over the next few years, she combed Seattle neighborhoods looking for crows who were down to fuck (the dead). When she found a breeding adult pair, she would place one of four stimuli nearby, either an unfamiliar dead adult crow, an unfamiliar dead juvenile, crow, a dead pigeon, or a dead squirrel.

And what she found, after going through this process with over 300 pairs of crows, was that in almost 25 percent of cases, crows made at least some bodily contact with the dead crows. And, in 4 percent of cases, that contact was sex.

"In the most dramatic examples," she wrote on her blog, "a crow would approach the dead crow while alarm calling, copulate with it, be joined in the sexual frenzy by its presumed mate, and then rip it into absolute shreds. I must have gone through a dozen dead crows over the course of the study, with some specimens only lasting through a single trial. It was an issue that may have been insurmountable if not for the donations of dead crows by local rehab facilities and the hard work of my long time crow tech turned taxidermist, Joel Williams."

As can be seen in the video, this isn't purely copulation: the crows engage in a wide variety of behaviors, including aggression, prior to getting down to fuck. Swift's explanation: "We think happens is that during the breeding season, some birds simply can’t mediate a stimulus (the dead crow) that triggers different behaviors, so instead they respond with all of them. This may be because the crow is less experienced, or more aggressive, or has some neurological issue with suppressing inappropriate responses."

To find out precisely what is going on with these creepers, Swift says more research is required. So, if you see her wandering around your block, don't call the cops; instead, pull out your own binocs and get ready for what could be a very strange show.