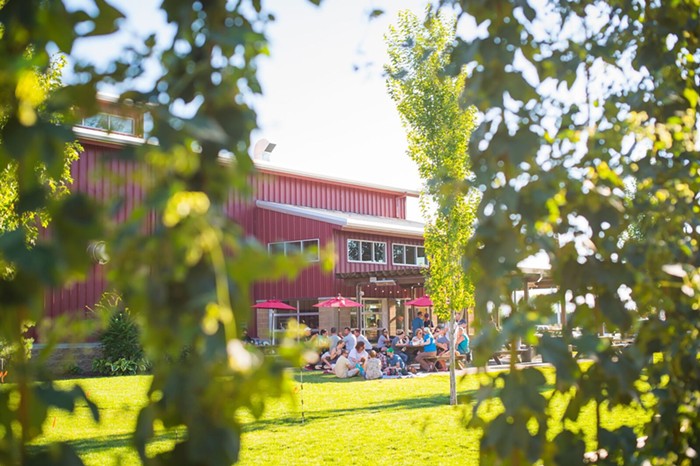 Bale Breaker's Yakima taproom is surrounded by hops. Bale Breaker
Beer in Seattle is good. It’s hoppy and sour and English and Belgian and hoppy and even if you wander aimlessly around town you can still find a good beer on tap.

But you aren’t always in Seattle, are you?

Sometimes you visit one of the three national parks surrounding Seattle, or perhaps you cross the Cascades and head into the drier half of our state, where things are less green but still beautiful. What do you drink when you leave the city limits and venture into the great unknown, where there's no Holy Mountain or Chuck’s Hop Shop to turn to?

Fear not, there is plenty of great Washington beer brewed outside of Seattle. Here are six breweries that are worthy destinations in their own right and certainly worth visiting the next time you leave the Seattle metropolitan area.

You’ve probably already tried Bale Breaker’s balanced and aromatic Field 41 Pale Ale or their boozy Bottom Cutter Double IPA. This Yakima brewery sends six packs to grocery stores across Seattle, but the brewery is still worth a visit, especially during the late summer.

Bale Breaker is not only a brewery but also an industrial hop farm. The family that owns Bale Breaker has been growing hops in the Yakima Valley for over 80 years and their commercial hop farm encircles their large brewery and taproom. Visit between July and September and you'll be surrounded by acres of towering hop bines.

You should order a flight so you can try both their flagship pale ales and experimental beers. Hoppy beers almost always taste better when they are fresh so a Field 41 in Yakima will likely taste a little different than what it’s like off the grocery store aisle. And since Bale Breaker is also a hop farm they have access to brand new hop varietals, giving you the chance to taste hops you've never heard of. The experimental hop on tap at Bale Breaker this year might be next year's "it" hop.

There are too many great Bellingham breweries to fit them all on this listicle so I will only pick the most important one to visit, and that one is undoubtedly Chuckanut. This German-influenced brewery is one of the best lager breweries in the country; they have won 18 medals in less than 10 years at the Great American Beer Festival (GABF), the premier beer competition in this country.

If you hear the word lager and think of swill that is best drunk cold and ignored think again. This Bellingham brewery makes lagers that are fantastically interesting. Their pilsner tastes like toasted grains with a touch of sweetness, like a drop of honey on lightly toasted bread, and ends with a snappy bitter finish. It won a gold in the World Beer Cup this year.

I’ve never been to Cologne, Germany, the native home of the Kolsch style, but I think Chuckanut’s Kolsch is better than any made there. It’s soft and refreshing with the lightest of grain flavor. It tastes like that feeling a corporate beer ad conjures in your brain when the model or the cowboy is drinking a cold, golden glass of suds, a feeling that ad writers can invoke in us but Budweiser or Coors is never able to deliver in their beer. Chucaknut’s Kolsch tastes that good, plus it has won four GABF medals, including three golds, since 2011. Which is insane when you consider that over 2,000 breweries compete at GABF every year.

It makes sense that Propolis Brewing is on the Olympic Peninsula, where glaciers feed some of the biggest trees on earth and country folk mix with hippies and multi-million-dollar yachts. Everything is a little bit weirder out there and Propolis reflects that.

This small brewery in Port Townsend makes beer with herbs like foraged heather and sage, flowers like chamomile and elderflower, local fruits like apricot and salmonberries, and weird grains like spelt and oats. Their beers almost always go through lengthy fermentations, resting for months as the beer’s yeast slowly create dynamic flavors.

I haven’t been fortunate enough to try many of Propolis’s beers but what I have had has been intriguing and tasty. I once tried their Melissa, a golden saison made with lemon balm, and it was full of citrus notes with a soft and completely dry body that made it especially refreshing.

Propolis’s taproom in Port Townsend is surprisingly quaint, given that it is in an industrial building walled with corrugated metal sheeting. If you’re on the west side of Puget Sound you should find a way to visit.

Tacoma is hardly outside of Seattle. But E9 Brewery still gets a spot on this “not-in-Seattle beer list” because a shocking number of Seattleites are ignorant of this standout brewery.

E9 is in an old firehouse—hence it’s full name “Engine House No. 9”—and has a restaurant serving the hamburgers and chicken parm that you would expect a converted firehouse restaurant to sell. But it’s the beer that makes this historic landmark worth visiting.

E9 makes some of the finest wild and farmhouse ales in the state. On a visit to their firehouse over the winter, I tried their Selcouth Farmhouse ale, it had a funky nose with a rooty, herbal, and lemon flavor. It was tart but restrained, delicious. At this year’s Farmhouse Fest at The Masonry in Fremont, I tried E9’s That’s A Knife, a wild ale brewed in collaboration with the venerable Oregon brewery De Garde. It was one of my favorite beers of the festival with a light tartness and notes of dried citrus rind and oaky barrels.

When the blog NewSchoolBeer.com wrote about Dwinell Country Ales they described the brewery as “the best new brewery in Washington that you haven’t been to,” which is especially accurate in this instance because it is the one brewery on this list that I have never tried.

That’s primarily for two reasons: It’s brand new, only about a year old, and its location is very inconvenient for someone who lives in Seattle. Dwinell is essentially on the opposite side of Mount Rainier from Seattle, in a small town called Goldendale along Highway 97 between Yakima and Portland.

Their tap list includes a mix of fruited sours and a long list of farmhouse beers that often showcase the famous hops of Yakima Valley to the brewery’s north. Everything looks delicious.

Maybe you’ll beat me to it.

There’s something oddly enjoyable to me about the contrast between the beer Skookum Brewery makes and their location in Arlington. Arlington is like one of those fictional towns in Twin Peaks – it was built around a lumber mill and has the staid taste of a rural community with less than 20,000 people living in it. Arlington is not a “cool” place, yet this town has a brewery that makes very fashionable beer.

Skookum makes the big, boozy, barrel-aged dark beers that craft beer fanboys freak out over. Like their Barrel Aged Breakfast Stout, an 11 percent milk stout brewed with maple syrup, coffee beans, and vanilla pods. Or their Murder Of Crows, a stout aged in whiskey barrels from their neighbors at Bad Dog Distillery.

Skookum is also one of the state’s finest producers of hazy IPAs, the IPA trend that swept across the nation and replaced the bitterness of West Coast IPAs with the softer, juicier hop bombs. Skookum’s Billowing Waves is one of my favorite local hazies, with big aromatic notes of melon and citrus with a body that is, dare I say, “crushable.” Forgive me for that.

Skookum's beer shows up on tap at Seattle's better beer bars but visiting their taproom about an hour north of the city is the best way to experience what Skookum is up to.

What brewery did I miss? Let me know in the comments.