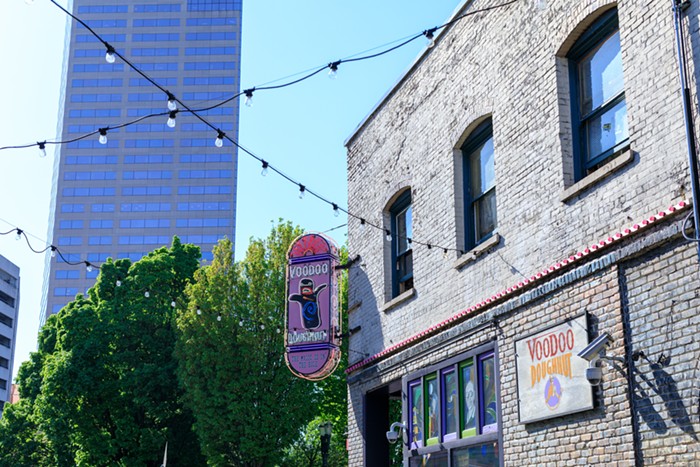 Rumors are circulating that a pair of Portland institutions are involved in a child sex trafficking ring. It's #Pizzagate, Portland edition.

The story, which was first reported by Media Matters, started August 4, when conspiracy theorist Nathan Stolpman, who hosts the YouTube channel Lift the Veil, posted an interview with "Vegan Mikey" aka Michael Whelan, a local man who claims to have witnessed children being abused at a party at Voodoo Doughtnut owner Tres Shannon's house. Vegan Mikey also connected the alleged pedo ring to Comet Ping Pong, the pizzeria in DC where a gunman opened fire during an attempt to "self-investigate" online rumors that children were being held as sex slaves in the eatery’s basement. #Pizzagate was thoroughly debunked, (there was no basement; there was no sex trafficking ring), but Stolpman and Whelan clearly still believe.

During the interview, the two credit also Isaac Kappy—a D-list actor and QAnon conspiracist who accused a long list of Hollywood figures, including James Gunn, Steven Spielberg, Seth Green, and Tom Hanks, of molesting children—with inspiring them to come forth. The video, however, wasn't up for long before it was removed by YouTube. Then, on August 10, Vegan Mikey was back for part 2, making the same allegations against Shannon. This time, he also claimed that soon after he blew the whistle on Portland's doughnut empire, he was attacked and received an eviction notice. Coincidence? He doesn’t think so.

As further proof, Stolpman offers this tweet, which has been pinned to Dante's Twitter profile for two years.

Macaulay Culkin—who is featured in the tweet—was, according to Vegan Mikey, at one of these child sex trafficking parties in Portland and also may very well be a child molester himself. (In another video, Stolpman parses out the evidence on Caulkin. Exhibit A: He wears bunny ears.)

Dante's didn't immediately return my request for comment when I reached out to ask if the business is involved in ritual Satanic abuse, but how could they not be with a name like that? (Note to Dante's: That was joke. Please don't sue me.) However, because I don't believe anything I read on the internet (except Slog) and because I asked the Portland Police Department if Vegan Mikey, as he claims, actually filed a police report against Tres Shannon (they have no record of this), I'm going to assume that this is a big steaming pile of bullshit and all these people should find a new hobby. Therapy seems like a good one.

Still, claims like this can up-end lives. Portland, in particular, is no stranger to social media rumors run amok: Frequently, they come from lefty social justice activists and target restaurant owners who've either kicked out or failed to kick out someone deemed problematic (read more about that here, here, and here). But, not so long ago, much of the U.S. became enthralled with stories of widespread ritual satanic abuse cults that were supposedly terrorizing towns and cities across the nation. Fueled by religious leaders, therapists, unquestioning media (and, I hate to say it, a certain strain of feminism), dozens of people across the U.S. were imprisoned for wild, outlandish crimes they didn't commit. In 1995 in Wenatchee, Washington, 43 adults were arrested on nearly 30,000 charges of child sexual abuse involving 60 children. Eighteen people went to prison. Seven years earlier, in Thurston County, several deputies in the Sheriff's Department were accused of participating in hundreds of satanic rituals and of murdering 25 babies. One deputy spent 10 years in prison.

In the '90s, the Department of Justice looked into claims of widespread ritualistic satanic sex abuse and concluded they were a myth. The accusations largely faded away in time, but as I wrote five months ago, conditions are ripe for a resurgence, in no small part thanks to social media and people like Nathan Stolpman, who continues to push these stories as though they were fact. We're seeing it, right now, down in Portland.