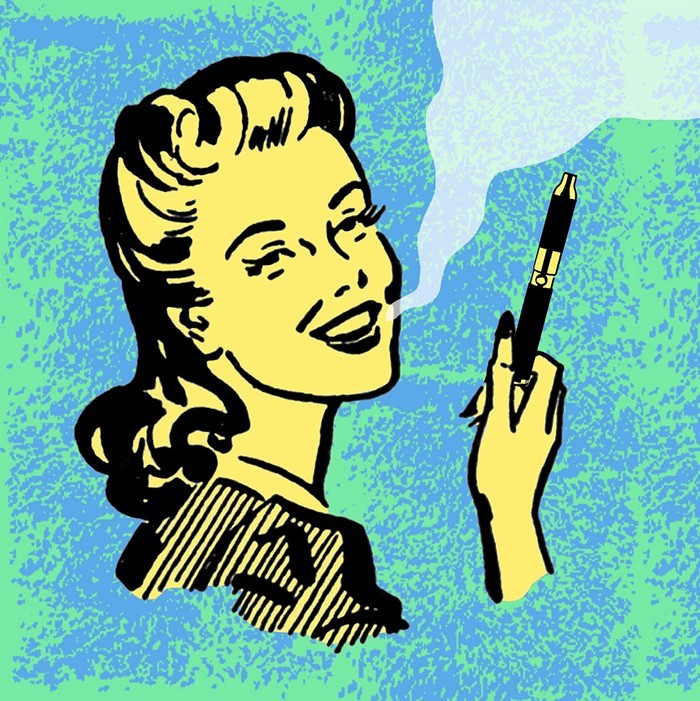 I can’t go anywhere in Seattle right now without seeing someone hit a weed vape pen. In the last week alone, I’ve seen people vaping weed in public parks, waiting in line to get on the bus, and, I kid you not, even while deciding between different loaves of bread in the grocery aisle.

I guess a hit of blue dream helped them pick the right type of multi-grain?

I don’t care, this is a judgment-free zone when it comes to where to vape. As I have said in the past, one of the joys of electronic weed pens is that they let you consume pot wherever the fuck you want. I do, however, reserve the right to judge you for what type of pot you are vaping.

I spoke with Daniel Luebke of Heylo Cannabis and Greg Shaw of Pearl Extracts, two Seattle pot processing companies that are making some of the state’s best vape cartridges and we came up with these six warning signs of a bad vape pen.

Step one: find a good retail store with knowledgeable budtenders you can trust. Having a trustworthy store is the best way to find great pot. Step two: avoid these six signs of a bad vape pen.

Pot has one of the broadest ranging flavor profiles in the world but it will never naturally taste like blue razz lemonade or strawberry mango papaya. Those are artificial flavors added to your vape pen, probably used to cover up some shitty concentrate.

Great pot tastes great, full stop. It needs nothing else, and when you start adding extra flavors you are almost always covering for an inferior product. Pot companies are required in Washington to label every additive they put into a cartridge, so if you see anything like “natural flavor added” you know that you are vaping more than just pot.

It’s becoming more popular to add “natural terpenes” back into vape pens. These additives are used to mimic the natural flavor of pot, so if a processor wants to create a perfect Lemon Haze strain but isn’t able to get that citrusy flavor naturally, they can just dump some non-pot terpenes into the mix. It’s not necessarily dangerous but it’s a shortcut and creates an inferior product.

Shaw said a properly made extract, like say a Tangerine vape cartridge from Puffin Farms, another local processor making excellent cartridges, has all of the flavors it needs.

“It’s a mouthful of oranges and it’s so incredible and amazing and citrusy all on its own just from the plant, I’m not interested in that other flavored stuff personally,” said Shaw.

Luebke said the terpene profiles in a natural pot plant taste better because they are made up of hundreds of terpenes, whereas the terpene additives are just a few terpenes mixed together.

“Non-cannabis terpene profiles just have a dozen or so terpenes in them to recreate the aroma of a strain, whereas cannabis produces hundreds or thousands of terpenes,” Luebke said.

Just like you want your IPA flavored with hops, not artificial additives, you should seek out vape cartridges that have the natural flavor of pot.

The Oil Is Runny

What happens when you lift your vape cartridge up and turn it over? Does the oil quickly run to the other side or does it only slowly start to shift? Pot is a sticky substance by itself, so if the oil appears runny and fluid then that might be a warning sign that the vape oil has been cut with extra additives.

If that runny cartridge is labeled as having a high percentage of THC, that likely means the processor is also lying about its potency, according to Shaw.

“You can’t buy a cart that’s 90 percent [THC] and still see it move. If you remove that much other fats and waxes, even if you cut it with a lot of stuff you can’t retain that percentage and still have it run,” Shaw said.

Which brings up another point: The best vape cartridges are usually not the most potent in terms of THC. To achieve 90 percent potency processors often have to heavily process the concentrate, losing lots of the terpenes that give you an enjoyable high.

“Some of our stoniest are not even the highest percentages, so shopping by numbers and buying 90 percent doesn’t make sense,” Shaw said. “If you can stay in 60+ in the THC range then you are going to get just as high, you won’t feel like you’re missing out.”

It Makes a Huge Cloud

Does your vape pen create a massive cloud of smoke that suburban vape bros would be envious of? If so, that should concern you.

“Cannabis doesn’t produce that type of cloud, the problem is what is a huge cloud created by? It usually would be propylene glycol, aka formaldehyde,” Luebke said.

That’s right, propylene glycol, a common additive in e-cigarettes, can be used to cut cannabis cartridges and produce a larger cloud of smoke. And, yes, propylene glycol can degrade into formaldehyde, the embalming fluid, when combusted. There are some studies that say the amount of formaldehyde is significantly lower than what you inhale by smoking certain cigarettes, but still, any formaldehyde is too much embalming fluid for me.

And propylene glycol is totally unnecessary if the processor is using quality products. So big vape clouds might get the e-cigarette crowd giddy, but you shouldn’t look for those in your pot vape pen.

You Don’t Know What It Is

The liquid inside your vape cartridge might not look like the leafy green pot you grew up with but that’s exactly what it is. It’s just a concentrated form of pot that has been combined with a solvent (usually carbon dioxide, ethanol, or a mix of hydrocarbon gases) and then runs through a big lab machine to extract all of the potent oils and leave behind any leafy green materials.

Different solvents and methods have their own benefits, but regardless of which method the processor chooses they are required to label whichever solvents they used. If the packaging on your vape cartridge doesn’t label the solvent then don’t buy it, it’s both illegal and sketchy.

Good processors usually give more information than they are required to provide because they are proud of every step in their process, so if a cartridge has additional information, like terpene data or a description of where the flower was grown, that’s a good sign, according to Luebke.

“Terpene information is not a required test for a producer or processor to take and it takes a lot of effort to put that information on it,” Luebke said. “So that’s a sign that the processor cares about the consumer experience.”

Have you ever purchased a vape cartridge only to have it crack open and spill sticky oil everywhere or just stop working? That’s become so common that many dispensaries now offer buy-back guarantees, ensuring that if your cartridge breaks you can come back and get a new one.

But even if the store will trade out the bad cartridge, a broken cartridge is a warning sign that the processor is trying to produce the cheapest product possible. There is a wide range of cartridge technology out there and the better cartridges—the ones that don’t break, don’t leak nasty chemicals into the oil, and even heat the concentrate—are obviously the more expensive ones.

“You would never put really good oil in a bad cartridge, that would be a waste,” Luebke said. “It’s a sign that the processor is trying to compete on price point alone and they are not investing in their product so it means they are more likely cutting corners in any number of ways.”

It's Cheap As Fuck

Ultimately, the price of your vape cartridge is going to tell you a lot about what is inside. There’s a race to the lowest prices right now in Washington’s market, thanks to hundreds of pot companies competing with each other, but buying the cheapest won’t get you the best product.

At Heylo Cannabis they make their concentrates almost exclusively with high-quality flower—the same type of nugs that you see for sale on retail shelves. But when you see extremely cheap vape cartridges that means they are almost guaranteed to be made with trim, the trashy pot leftovers that are way too shitty to sell directly to consumers.

“If you’re like 'how did they get it so cheap?', well, there’s a reason,” Luebke said. “When you are buying a $15 or $20 cart you can pretty much guess that it will be a cheaper starting material.”

Shaw said to expect to spend at least $25 on a half gram vape cartridge, and a spending more will get you an even better product.

“If you can’t pay $25 for a half gram than maybe you should just buy weed,” Shaw said. “If you can spend $35 on a half gram you can get something that is fantastic that would be a lot more in other places.”

Luebke and Shaw are in the business of selling high-quality vape cartridges, so I suppose their recommendations on price should be taken with a grain of salt, but I agree with their recommendations. Washington’s retailers are running some crazy sales this summer so occasionally you can find great vape cartridges for around $25, but in my experience, that is very rare. Expect to spend above $30 for a half gram of great products.

Despite everyone and their mother vaping pot these days I still hear people complain that they never feel like they get that high from vaping. I guarantee that is because of what is inside your vape pen—a cartridge filled with a high-quality product will get you wonderfully high. So if you feel disappointed with what you’ve been vaping, heed this advice.

And then go to get high.

The brewery that opened in 2015 is innovating in hopes that it can survive 2020.