Remembering Yoko Ott, a Beloved Leader of the Art Community 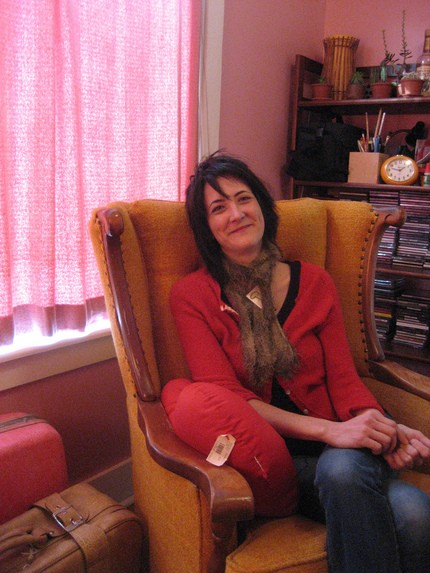 Yoko Ott, Oct. 31, 1970 – Oct. 19, 2018 FAYTHE LEVINE
"Great words won’t cover ugly actions,
good frames won’t save bad paintings."
This quote from the song “New Noise” by Swedish punk band Refused is now the forever banner of Yoko Ott’s Facebook profile. Yoko’s profile photo shows her all wild-haired and sexily dressed in a sleeveless Approve 74 (the Washington Same-Sex Marriage Referendum) shirt, sitting on a stage as part of a panel discussion. She holds a mic in her right hand while her left is turned palm upward. She appears to be either receiving a question from someone in the audience or getting ready to answer one.
Sponsored

As I talked to more and more people throughout this past week, everything about this photo is a befitting memorialization for a woman who was forcefully passionate not just about art but about the entire scaffolding around what makes art possible.

The circumstances of Yoko’s death haven’t been publicly revealed but it was sudden and unexpected and of the kind that causes a very complicated grieving for her survivors.

For my part, I only sort of knew Yoko tangentially from being around the Seattle art scene. The more people I talked to, the more evident it became just how deep her impact has been on Seattle’s artists as not just a curator but as someone who helped give shape to artists' work.

Over the past couple decades, Yoko held positions with Seattle’s One Reel, at Seattle University’s Hedreen Gallery, with Bellevue’s Open Satellite program, and with the John and Shari Behnke’s New Foundation. A couple years ago, she and her husband moved to Hawaii where they were part of the Honolulu Biennial Foundation and she supported the Ho’oulu ’Āina Project (an environmental sustainability organization).

Recently, she served as a Board Member then Deputy Director until finally being named Executive Director at Yale Union contemporary art center in Portland this past March. This is the institutional roll call of Yoko’s career but her ambition rested less with the institutions she worked at and more with the artists she worked for.

I spoke to Juniper Shuey of zoe|juniper about Yoko’s influence on the visual art and performance collaborative.

“Yoko was one of the people who helped set the foundation for me in developing an art career that didn’t have to live inside a gallery or follow the usual path,” Juniper said.

He talked about how Yoko helped change the way the visual arts portion of Bumbershoot was developed and presented.

“She’s someone who just knew that you go all the way and you don’t half-ass anything. She did all the behind scenes work to make it not just be an idea but to make it as amazing as can be,” he said.

After reading Michael Upchurch’s 2013 profile of Yoko in The Seattle Times and talking to more people, I got the sense Yoko pushed hard for what she wanted, maybe even uncomfortably so for some. I asked Betsey Brock, Executive Director of On The Boards, about whether this was an accurate assessment.

“I know Yoko and I share a strong loyalty to the people and the art and artists and the mission that we want to move forward," said Brock. "We can be really pushy about this and it’s not necessarily well received by everybody. But it gets shit done. Yoko certainly had that. She’d work closely with an artist to get an idea sorted out and move it forward. And she took great care not just of the artist but everyone surrounding them, including workers.”

“It is still fresh and unbearable,” Robin Held wrote to me in an initial message when I reached out to her.

Robin graciously made time for me while at the airport on her way back to Pullman where she is the Executive Director of the Jordan Schnitzer Museum of Art at Washington State University.

“Yoko lived and worked her values. And she was committed without compromise to realizing an artist's vision. She made a huge impact in three different markets (Seattle, Honolulu, and Portland). We will be seeing the positive impact of her legacy for generations.”

The scaffolding Yoko built over the years remains. Her legacy—which deserves a more comprehensive profile to delve into the art she curated and fostered into being—is in the artists whose work she helped shepherd and champion over the years.

On the evening of October 26th, impromptu memorial services were held in Seattle, Honolulu, and Portland. A larger memorial event is being planned for a later date. Information will be updated once it's confirmed.