Why Do White Women Support Republicans? Because They Are Republicans. 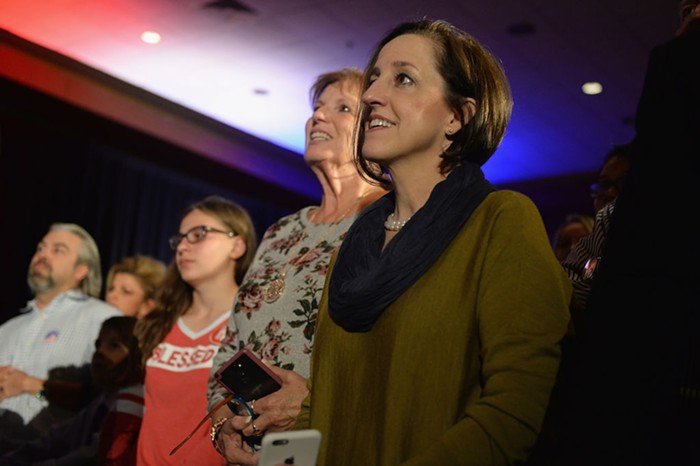 Women at Republican Josh Hawley's election night victory party in Missouri. Michael B. Thomas /Getty
Immediately after the midterms ended and the media started reporting that a majority of white women voted for Republicans Ted Cruz in Texas (59 percent), Ron DeSantis in Florida (51 percent), and Brian Kemp in Georgia (76 percent), the calls for white women's heads started rolling in on social media. White women didn't vote for those candidates in higher numbers than white men, but instead of calling out men, progressive white women started self-flagellating and promising to make other white women, collectively, "do better." Others were less conciliatory, like the actor Heather Mattarazzo, who tweeted that white women should “choke to death on the white supremacist patriarchal cock.”
Sponsored

None of the people issuing either mea culpas or threats seem to have actually voted for Cruz or DeSantis or Kemp or Trump, but apparently they think they can sway those who did by using some combination of shame and bullying, including the Women's March, which tweeted:

There needs to be accountability and an honest reckoning. There’s a lot of work to do, white women. A lot of learning. A lot of growing.

This tweet was not well received, at least if the 4,800 replies—the vast majority of which are some variation of “fuck off”—are any indication. As one woman replied, "I’m going to just take a stab in the dark here, but I’m not sure if condescendingly telling an entire demographic of women that they have a lot to learn and need growth is a good strategy."

While I understand the impulse to blame anonymous populations for our problems and defeats, it's not hard to see why people bristle at this kind of message. Blaming white women for not electing Democrats is based on the false presumption that white women are a homogenous population, that we are all supposed to be allies for the great feminist cause. When the right does this—treating, for instance, all Arabs (and Indians, Pakistanis, and Sikhs) as criminals when a Muslim extremist commits an act of violence—those of us on the left tend to object, and for good reason: Punishing the collective for the actions of the few is how we get things like the Muslim ban, the border wall, racial profiling, and vague demands that all Muslims get together and condemn ISIS attacks in unison. It’s ridiculous thinking: People are individuals, and we should treat them like it—and that even includes white women.

White women are not a monolith. We don't all know each other. We don't all go to the same church or yoga class. Some of us, in fact, don't go to church or yoga at all. White women, like all populations, are a large, unwieldy group made up of individuals with an array of concerns and values, and less than half (48 percent) of white women lean Democratic. The fact that conservative women voted for Republican candidates should be no more surprising than the fact that liberal women voted for Dems, regardless of their race.

There are reasons not to blindly shout about "white women" when you’re pissed about the outcome of the election. For one, why the hell aren't you shouting at white men? They vote for Republicans at even higher rates than white women. This women-blaming rhetoric reeks of misogyny, which may be ironic considering it comes primarily from progressive women. Regardless, it won’t fix anything. The way to win races is to actually appeal to voters (or to suppress them), and the only way to appeal to voters is to either try and change their opinion (and good luck with that) or to meet them where they already stand. There are risks to this, and it sometimes means abandoning your own party. Take West Virginia, where incumbent Sen. Joe Manchin won his race in a deep red state despite Trump campaigning for his opponent. What did Joe Manchin do to survive in Trump country? He voted to confirm Brett Kavanaugh despite the outcry from Democrats. Manchin may have seemed like a traitor at the time, but it saved the party a seat in the Senate.

The opposite happened in Missouri, where incumbent Democrat Sen. Claire McCaskill lost to Republican Josh Hawley by six points. Missouri, like West Virginia, is a deep red state, and, when polled, 51 percent of voters said that McCaskill's vote against Kavanaugh influenced them to vote against her. And that includes white women. This may seem anathema to those who opposed Kavanaugh—those who can't imagine supporting a pro-life judge, much less one accused of sexual assault—but the women who voted for Josh Hawley are not allies. They are Republicans, and while their opinions on public policy may be incorrect (at least, in my own opinion) they are as deep and as firmly-held as any liberal's.

As the election results in Missouri, Texas, Georgia and elsewhere show, plenty of white women reject the idea they should vote Democratic just because they are women. They don't feel like "foot soldiers of the patriarchy," as feminist Mona Eltahawy put it, and I'm guessing plenty of them don't even believe in the patriarchy at all. They're not going to change their votes because progressives they've never met think they have some kind of obligation to vote for Democrats because of their double-x chromosome. What’s more, this idea that white women should be expected to go around and school all the white women in our lives who voted for Republicans, as some people are claiming, neglects the fact that humans tend to self-sort into groups based on like politics, education, work, and values, as well as race, religion, sexual orientation, and ethnicity.

How many Democrats do you think are actually palling around with people who voted for Trump? The only white women (or men) I know who might have voted for Trump were the evangelical Christians at my high school. Should I call them up, 20 years later, and inform them they are bad allies to women? If anyone thinks this would be effective, they've never tried to change someone's opinion. As the writer and thinker Katha Pollitt put it on Twitter, "Even if one were to have these difficult conversations, how successful would they be? I've been writing for 40 years, trying to persuade people, and I doubt I've changed the minds of more than a handful of people, mostly young and unformed."

Now, I don't think that people's opinions are impossible to change, but the first step to changing someone's mind is to actually understand them, and instead of trying to understand just why someone might vote for Trump or for any other Republican, instead we are lumping an entire demographic together and then assuming that demographic has been brainwashed by her husband.

Blaming and shaming conservative white women will not win elections. If Democrats want to win this population over, they need to find a message that actually appeals to them, and faraway progressives screaming "white women do better" is not it. Of course, Democrats don’t have to appeal to conservatives at all. While, on a good year, less than half of Americans show up and vote, the number of liberals in the U.S. is steadily rising, and if all of those liberals actually decided to participate in this part of the civic process, progressive candidates can and will win elections. The results of the midterms this year show us that. The problem right now is that more conservatives—including, yes, white women—than liberals actually show up and vote. So perhaps a more effective message than telling Republican-voting white women to do better—or to choke on the patriarchy’s cock—would be to target like-minded liberals from across all populations who still, for some reason, don't vote for anyone.