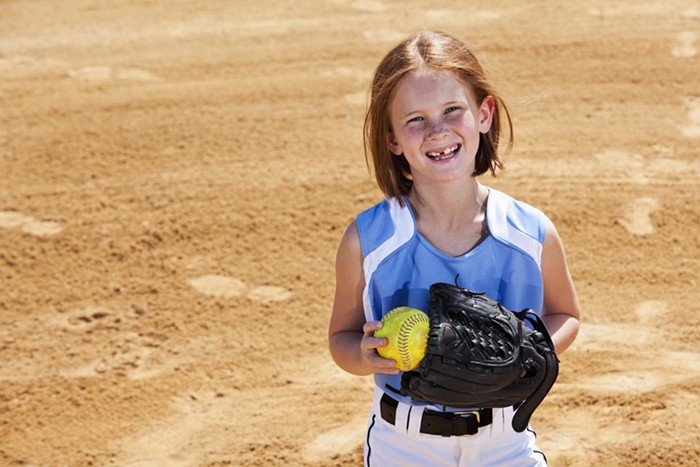 Maybe she just likes baseball; maybe she was Babe Ruth in a past life. kali9/Getty
A trio of academic hoaxers recently made news after managing to get seven nonsensical papers accepted into peer-reviewed academic journals, including one about rape culture at dog parks. So when I recently heard about a new academic study examining gender nonconforming children and past lives, I thought for a moment the hoaxers were back.

Nope. This one is real.

Researchers from the University of Virginia studied 469 children who claim to have memories of past lives and, using "logistic regression," a form of statistical analysis, they found that "children who remembered a life involving a different natal sex were much more likely to exhibit [gender nonconformity] than children who remembered a same-sex life." If you take this to its logical conclusion, I believe what the researchers are saying is that the reason I dress like a captain on a fishing boat may be because in a past life I actually was a captain on a fishing boat (or, more likely, the one puking off the side of the ship).

The study was published in the International Journal of Sexual Health, and Jim Tucker, one of the paper's co-authors and a psychologist at the University of Virginia Division of Perceptual Studies, is one of the foremost reincarnation scholars in the field, which apparently exists.

Tucker, the author of the book Return to Life: Extraordinary Cases of Children Who Remember Past Lives, has reportedly compiled the largest database of past-life accounts in the world, and, as he has found, plenty of people insist they have memories of a life before this one. (Just go to Burning Man and ask around. What you will find, strangely, is that while plenty of people believe they were healers or shamans or kings or chiefs in past lives, almost no one remembers being a pauper or peasant. Go figure.) Still, there is no empirical evidence that past lives exist, and until Tucker and his colleagues can come up with evidence that is more than just anecdotal, I'm inclined to think reincarnation is as much a fantasy as the Garden of Eden.

However, gender nonconforming children, while not Jim Tucker's field of expertise, are certainly real. (I was one.) As for why some kids don't conform to gender roles, it could be that gender roles are arbitrarily imposed on children with no rhyme or reason and some kids simply reject that. Some girls want to play baseball, some boys want to do dance. That said, multiple studies have found a correlation between childhood gender nonconformity and adult homosexuality. The jury is still out on what exactly causes same-sex attraction, but it likely has something to do with both biological and environmental factors. Some studies have shown, for instance, that younger brothers are more likely to be gay than first-born brothers—a phenomenon called the “fraternal birth order effect"—possibly because of the levels of particular antibodies in the mother’s immune system increase with each birth. Other researchers have suggested there is a genetic component to same-sex attraction, although we know from twin studies that genes can't explain everything. And, of course, some gender nonconforming kids grow up to be straight and others grow up to be trans. As the sex research Ken Zucker told me in an email, when it comes to the reasons for gender nonconformity it's "a simple question with a complex answer... but 'past lives' is not one of them."