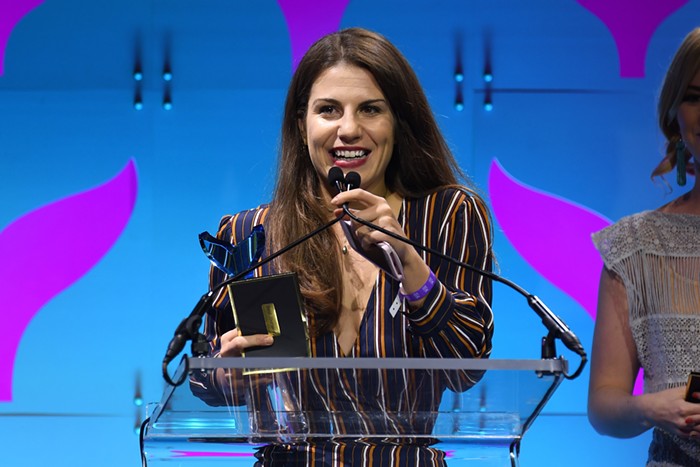 #Resistance shero Lauren Duca was outed as a bully this week by Jezebel. Dave Kotinsky / Stringer
This week Jezebel published its latest investigative feature, a takedown of minor media figure Lauren Duca. Duca, a 28-year-old freelance writer, is known for parlaying a viral column in Teen Vogue (with the exceedingly millennial title “Donald Trump is Gaslighting America”) into a career as a sometimes-cable news pundit and, as of recently, an adjunct instructor at NYU. She has a lot of followers on Twitter, but if you’ve never heard of it, it’s probably because she’s not actually famous outside a certain demographic of hyper online media consumers. Still, Duca (allegedly) did something bad, and Jezebel senior reporter Anna Merlan was on the case.

The big dirt on Duca, according to Merlan’s 4,500 word article, is that in 2015, when Duca was 25 years old and working at the website formerly known as the Huffington Post, she got drunk at an office party, got into a tiff with a coworker who unfollowed her on Twitter, and later emailed the Huffington Post shit-talking that very same woman. She called her coworker, according to Merlan, an “overweight fake blonde.” Then, perhaps in an attempt to cover her trail, Duca apparently emailed the site a few more times with insults for other writers, including herself, whom she referred to as a “feminazi.” (I’m a bit surprised she didn’t call herself “that super hot and smart feminazi who should probably be a model,” but maybe she ran out of space.)

According to Merlan, one coworker filed a complaint after his incident, Duca was investigated, and then left HuffPo soon after. The company refused to comment on HR issues, but the implication is that she was fired.

While Duca has never apologized for this or even admitted her guilt (she claims someone else sent the email using her address), this story has been filtering through New York media circles for years. And yet, she’s been seemingly unscathed by the scandal, at least until now. Her career appears to be flourishing, and she’s had bylines in the New York Times, New York Magazine, The Nation, and in The New Yorker.

This upward ascent might change after Jezebel’s thorough trashing. The story is humiliating. Duca doesn’t come across just as a fool, but also as a hypocrite, someone who’s created a feminist persona for herself when, in her personal life, she’s guilty of bullying women. As Merlan writes, “Duca’s past behavior has been at odds with the carefully curated personal brand she now promotes.”

Still, I’m also not sure why this is news. The alleged incident happened four years ago, and Merlan writes that she’s had the story for two years. She, too, seems torn over whether this was actually newsworthy. After the piece was published, she wrote on Twitter: “I had a hard time decidiing [sic] to write this. I tried to explore it as responsibly as possilble [sic]. I reached out to Lauren many times for comment. And I tried to explain in the piece why I believe it belonged in the realm of a news story and not as backchannel media gossip.” And this is true. Approximately half of the piece is about Merlan grappling with whether or not to publish.

I can’t speak to why no one else touched the story, but my editors and I have all shared a reluctance to report it out for years, for a complex mix of reasons. We didn’t want to punch down, as the saying goes, at a younger writer, and in my case, I was frankly reluctant to go after a woman for anything short of an egregious offense, especially a woman who isn’t an elected official or a true household name.

But as time went on, that began to feel like the wrong choice, one we were making more out of expediency and perhaps cowardice than actual news judgment. People had spoken to me about Duca’s alleged behavior and had shared the ways it had hurt and continued to hurt them, and I was choosing to walk away from it out of a desire to avoid controversy.

This reads as though Merlan is, to use an old J-school trope, “speaking truth to power,” but Lauren Duca is barely a public figure, much less one with actual power. She’s not an elected official or a corporate leader or even a regular on Fox News. The truth is, as much as journalists like to claim their work is in the public interest, sometimes gossip is just gossip. And in this case, the gossip is juicy as fuck.

Jezebel and the entire Gizmodo empire is built on internecine, media-industry navel-gazing. They are mean girls disguised as media critics, and there is no New York media figure too small to be the subject of their takedowns, from Jack Smith IV to Jesse Singal (never heard of them? Maybe because they’re also not famous!). I know I’m not in New York, but I’m also not famous, so in light of this trend, I’d like to get a few things off my chest before Jezebel decides to do it first.

1985: I pretended to read the hit children’s book If You Give a Mouse a Cookie in front of my babysitter. In reality, I could not read and had memorized the book’s contents.

1986: I stole a toy giraffe from daycare. When my mom asked where I got it, I said my teacher gave it to me. This was a lie.

1987: I put a rubber snake in my aunt’s purse. She was terrified of snakes and had a moderate panic attack.

1987: I told my younger cousin that there was no Santa, which is odd because I still believed in Santa myself.

1988: I told our entire class that my twin sister still wet the bed. This is true but it was also an unnecessary act of cruelty.

1989: When my class was instructed to make cards for a local boy who had been diagnosed with cancer, I wrote, “See you in Heaven.” This was a lie. There is no heaven.

1989: I stared at a man who had been burned in a horrific car accident while at a youth soccer game. When my mom told me to stop staring, I told her that I wasn’t. This was gaslighting.

1989: I asked my speech therapist if she was having a baby. She was just bloated.

This brings us to the 1990s, a decade in which I repeatedly lied to my parents, snuck into R-rated movies, smoked an unfiltered Camel cigarette I found on the side of the road, refused to do chores, never walked the dog, talked back, made prank phone calls, rollerbladed without a helmet, cheated on my eighth grade boyfriend with his cousin, was late for school, lied about why I was late for school, and, once, started a small fire outside my mom’s office. I also tried to smoke banana peels, to no effect, and had dreadlocks, which I subsequently found out were racist.

Things got even worse in the 2000s, a decade I fondly refer to as the “lost years.” I was drunk for the majority of my college and post-college years, and while I don’t remember much, I do vaguely recall burning down a porch and, after wrecking my bicycle and being taken to the ER, lying about my identity because I didn’t have health insurance. I also once skipped class, emailed my professor to say I’d been in a fender bender, and wore my roommate’s old neck brace for a week just to prove it. I also enjoyed shoplifting, but only from corporations.

This is just the beginning. At 35 years old, I’ve committed far more sins than I can remember. I’ve quit jobs without notice, cheated on girlfriends, been complicit in other peoples’ cheating on their girlfriends, stolen stamps from an employer, and used the HOV lane without a passenger. While I don’t think I’ve done anything quite as humiliating as what Lauren Duca is accused of doing, a few things surely come close. Luckily, a steady diet of weed has erased most of these trangressions from my memory, but I’m sure that if given a few weeks and 5,000 words, Anna Merlan could uncover everything for me. So before that happens, let me issue a blanket apology: I’m sorry. I’m sorry for lying, for cheating, for being a hypocrite, for bullying, for trolling, for littering, and for not always recycling. I'm sorry for peeing in the pool until I was 8. Mostly, I’m sorry for doing all of the terrible, selfish things that make us all human. I understand if the victims of my crimes cannot or will not forgive me, but I promise, in the future, to do better. I have to: You never know when Jezebel is going to be watching.