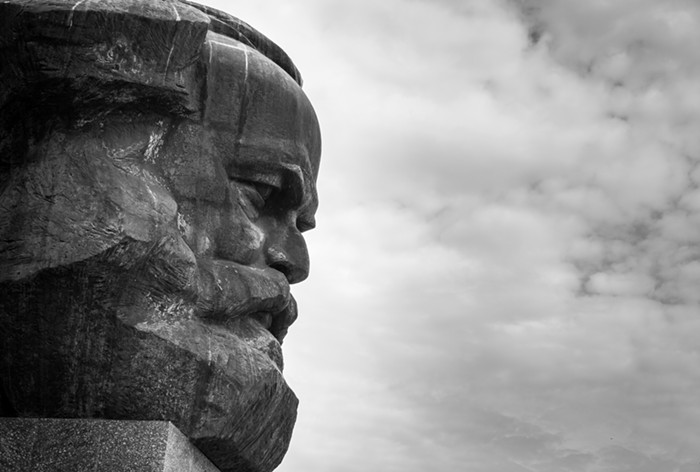 Jordan Peterson does not get him... weiXx/gettyimages.com
I finally figured out what all of this cultural Marxism noise is about. The insufferable exemplar of self-sourced self-certainty, Jordan Peterson, sees it as a cultural project instigated by Western Marxism (he may not know that term, by the way) after the economic doctrines that were established by classical Marxism (he may not know that one either) in the 19th century collapsed in the face of the catastrophe of Soviet totalitarianism (he definitely knows this one).
Sponsored

Peterson argues, with little or no real intellectual force (but with the passion of a bulldog focused on the hopping and acrobatic happenings of a squirrel beyond its reach), that in a cultural mode, classical Marxism (poor man versus rich man) became the postmodernism (effete intellectual versus Joe Sixpack) disseminated by an exchange between elite US universities and French intellectuals in the 1970s. And so Marxism, which saw the subjects of history as labor and capitalists, morphed into a program that pushed Peterson's bête noire: identity politics. I have more to say about this, but, I, unlike Peterson, will make real demands on my readers.


This is so much nonsense. And dear followers of this character know that he likely does not read books or, certainly, cannot be connected with anything that can be defined as serious scholarship. Yes, Marxism did suffer a blow in the 1950s and 1960s, but not because of the failure of command economies defined by socialist states in the East. No. It was because of the success of state interventionist capitalism in the West. Peterson sees the two state forms as different, but state socialism and state interventionist capitalism have the exact same root, which is, precisely, the Marxist class critique of deep and brutal class conflicts in the 19th century. Despite its success, state interventionist capitalism (robust social welfare, unions, wages), or, put another way, the West's response to the Soviet project, was abandoned in the 1970s.

Sorry, Peterson fans, but you need a much better historian, and one who is an actual intellectual. I know hearing this hurts. My last post about Peterson exposed me to your powerful feelings about this Canadian character. You really love and believe in him. But I'm the black cloud carrying away the ersatz sun. I come as the facts that are facts. And here are a few you need to grasp.

The project of capitalism is, one, extremely brutal, as attested by Joseph Conrad's novella Heart of Darkness, and the real-world history (the 19th century Congo) it's based on. And this is not to mention the massive human catastrophe of American slavery, which was a capitalist project. Indeed, the young French economist Thomas Piketty even challenged, in his popular book Capital in the Twenty-First Century, the popular idea introduced by the late and neo-classical US economist Gary Becker, "human capital." For Piketty, it misrepresents what capital actual is, whereas a description of American slavery would represent it precisely: these humans were valued in exactly the same way you value a house or a financial asset—in short, as capital. And how much of this dead capital was tossed into the sea during its shipment across the Atlantic? This was capitalism. And so was the potato famine.

Secondly, postmodernism is a post-structuralist project and not a Marxist one. Why? Sorry, but your Peterson has no idea about this because, I suspect, he has just not read the books (I must repeat this real possibility in the hope of curing you of the spell he has cast on you). Anyone with a basic (and not complex) grasp of the history of French or continental intellectual developments at the end of the 20th century is very aware of the fact that the classical Marxism that crashed in the 1960s (during the Trente Glorieuses—1945 to 1975—the Keynesian response and solution to the real threats of a socialism born in the 19th century) did not take a new and altered form, a Marxism by other means. The truth is there was a real rupture. This rupture is found in the French turn to Nietzsche and the key structuralist concept of historical contingencies. Both developments mark a violent break from classical Marxism. As for the celebration of difference, this had nothing to do with classical Marxism and lot do with breakthroughs in the science of the times. You will not understand Deleuze's celebration difference if you place out of the context of the revolution biological or evolutionary thinking.

Marxism survived in the structuralist moment in France (1950s and 1960s) by way of Louis Althusser, but not as the post-structuralism of Deleuze, Foucault, and Derrida, none of whom can be called a Marxist without causing laughter among those in the know (Peterson, who can be described as a third-rate Bernard-Henri Lévy, is clearly not in this group). The simple reason is the point of departure for post-structuralists is a philosopher that apparently Peterson admires, Nietzsche. For classical Marxism, it is clearly Hegel. These, intellectually speaking, are two different languages or landscapes.

If you want a quick introduction to these important late-20th century developments, I simply recommend stop listening to Peterson on YouTube and read a very accessible 2013 book by the Swiss sociologist Razmig Keucheyan, The Left Hemisphere. It explains why post-structuralism struck a note with elite North American universities. It was an idea that simply did not exist for classical Marxism, but one that was important for American Empire, whose emerging neoliberal project, globalization by corporations, was very useful or even crucial to its propagation. It was a tolerance of cultural and sexual identities and racial differences in an expanding world market. Identity politics is actually problematic for Marxists (not neoliberals) precisely because it does not privilege the economic. Think of it this way—identity politics can produce an openly gay CEO of Apple. It does not disrupt the system. It confirms it.

So what exactly is Peterson feeding his many readers? Not an informed critique of Marxism or Cold War politics. His is not even a critique of neoliberalism, which is actually pro-identity politics or the respect of cultural difference (this is made clear by an important book that tracked these developments, The University in Ruins, and also the crisis of Brexit). It's exemplified by the corporate community's (from Budweiser to Amazon) rejection of Trump's Muslim ban, and the emergence and limited significance of a New Marx Reading—Neue Marx-Lektüre—on the critical theory scene. These are the facts. Not Marxism, but a neoliberalism that found its intellectual force in what Peterson imagines as Cultural Marxism but is, in fact, a post-structuralism that exploded on the scene in the 1970s, was promoted by North American universities, and was vigorously anti-classical Marxism. This is how it went down, dear lover of the nonsense pushed by that Canadian charlatan.