Less Than 4,000 People Voted in This Year’s King Conservation District Election, but Here’s Who Won 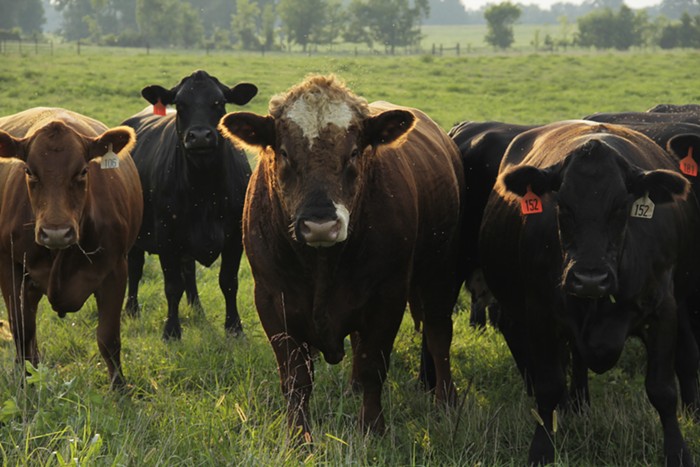 These cows didn't vote. Did you? Lester Black
There are over 1.2 million registered voters in King County but only 3,448 people, or about 0.29 percent of voters, cast a ballot in this year’s King Conservation District Election. The low turnout may have been caused by the district’s malfunctioning election website. Or perhaps a typo on the ballot is to be blamed. Or maybe it was just because the district hardly publicized the election.

Either way, our local conservation district is looking at ways to outsource future elections in the hopes of increasing turnout, according to Bea Covington, the district’s executive director.

“Our preference would be to have the election executed by election professionals,” Covington told me on Friday. “King County Elections has reached out to us and we will hopefully talk to them about ways to partner together.”

This year’s election was for one of three positions on the public agency’s board. The election results have not yet been certified but Covington told me Kirstin Haugen won the election. Haugen, who has worked on 4Culture’s board of directors and the Cascadia College Board of Trustees, said in her candidate statement that “it is imperative we find a legislative solution to place board of supervisor elections on the regular ballot.”

The King Conservation District is one of 45 conservation districts in Washington. The public agency has a budget of $7 million and works on a range of land management issues, from testing soil quality to educating landowners and other state agencies to providing technical assistance on land management practices. The board collects a per-property fee from landowners in most of King County and all of the county’s unincorporated areas. The annual fee ranges from $7.70 to $10 per property, according to the board’s 2017 annual report.

Washington’s voters usually receive mailed ballots sent directly to their mailboxes, but mailing ballots to all of the King Conservation District’s voters would cost millions of dollars, according to Covington. So instead of mailing all of the ballots, the agency required that interested voters request a ballot be mailed to them or vote in person. This process had its own problems. The website voters needed to use to request ballots was malfunctioning up until the day elections started on March 18th and a typo on the ballots wrongly instructed voters that they had until April 4 to vote even though the deadline was March 29. Covington said the ballots were corrected mid-election and the voting deadline was extended two extra days.

“We were able to correct that on our website by the 20th and all ballots that went out after that were also corrected with the correct information,” Covington said. “We extended the voting period through Sunday the 31st and we had additional polling hours on the 30th and the 31st.”

In addition to procedural problems, turnout was probably also diminished by the district’s efforts to publicize the election. State law requires, at a minimum, that the conservation district announce their elections in local print media, which the King Conservation District appears to have complied with by publishing election notices in the Seattle Times. But state law also states that conservation districts are “strongly encouraged to exceed the minimum due notice requirements to reach the maximum number of potential candidates and voters.”

The district hardly exceeded the minimum. The district posted election notices and candidate to their website but buried those notices on their blog, which does not appear on their home page. They keep an active Facebook account, with multiple posts a week, but didn’t announce the election on social media until March 18—the day the election started. When I reached out in early March the district failed to return my calls for more information for an entire week.

Conservation districts have a history of election problems in Washington since they were first established in 1939. The state Legislature passed a law in 2001 requiring that the districts make their elections more public because “only those involved with districts were voting,” according to a 2011 report from the League of Women Voters of Washington. The Legislature later required that conservation districts hold their elections within the first three months of the year making it impossible for them to put their election on the general election ballots sent out in November. Peter Callaghan, writing for the Tacoma News Tribune in 2005, said “Nearly everything in the law governing these [conservation district] elections makes participation difficult and unlikely,” also according to that League of Women Voters report.

Covington said it would be a “critical limiting factor” for the district to pay the county to mail out ballots to every eligible voter, as it would take up nearly half of the agency's budget. She said one option would be for the county to waive the mailing fee for the district, which Oregon already does according to the League of Women Voters. Covington said it’s important to her to make the elections “as normal and as part of the routine voting rhythm as possible” because she believes “the more people that are participating the stronger that we are as an organization.”

That may ultimately require the district to outsource the election entirely.