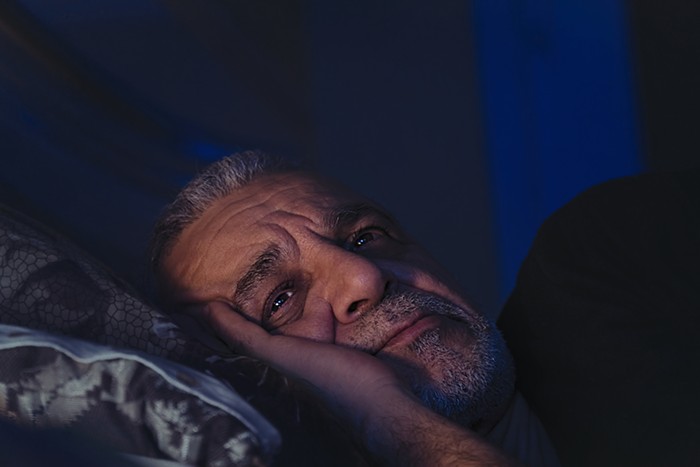 A portrait of the author at night. Enes Evren/Getty
Every night before bed I go through the same routine. I lock the doors, turn off the lights, brush teeth, wash my face, pee somewhere between three and 17 times, get in bed, read whatever book or magazine is at the top of the pile on my floor, kiss my girlfriend goodnight, and proceed to lay awake for at least the next hour wondering why I can’t go to sleep.
Sponsored

In the four years my girlfriend and I have lived together, I can count the number of times I’ve fallen asleep before her on one finger, and that only happened because I once treated a head cold with a handful of Benadryl and 100 milligrams of THC. It’s remarkable. She’s like one of Pavlov’s drooling dogs: She sees a pillow and immediately starts snoozing, whereas for me, sleep has never been easy. I’ve tried melatonin and white noise and listening to the BBC late at night, and while you’d think posh British droning would instantly trigger narcolepsy, all it seems to do is give me nightmares about Nigel Farage.

While sleep, for some people, can get more difficult with age, this isn’t exactly a new development in my life. When I was 12, I read Jaws in a night and then picked up whatever Goosebumps or Archie comic was lying around and kept reading. Every single night for most of my childhood and adolescence I was awake long after everyone had dozed off, and I still am, decades later.

Obviously, I’m not alone in my night-time misery. According to the American Academy of Sleep Medicine, a professional organization for physicians specializing in sleep, 30 percent of adults have trouble sleeping. What the fuck is up? Why do some people—for instance, my girlfriend—drift off as soon as the lights are dimmed while others—namely, me—struggle with this very essential human task. I mean, it’s fucking sleep, not running a marathon. What could possibly be easier?

Brandon Peters-Mathews, a sleep specialist at Virginia Mason Hospital in Seattle, told me that variations in sleep patterns are normal, and we’re not particularly good at judging how long it takes us to fall asleep. “It is normal to fall asleep within 20 to 30 minutes,” he says. “Many people will fall asleep within 5 minutes and may feel like they fall asleep instantly. This discrepancy occurs due to the time it takes to convert short-term memory to long-term memory.”

Sleep, he adds, can be influenced by environmental factors like light, noise, and temperature. This seems pretty hard to dispute. It’s harder to fall asleep when your neighbors are playing Counter-Strike at maximum volume, or when it’s so hot that even a sheet on your body feels like oppression.

“Psychosocial factors may also impact the ability to fall asleep,” Peters-Mathews says, including stress and anxiety. And there are actual sleep disorders like restless legs syndrome and sleep apnea, both of which can make it difficult to fall and stay asleep.

Then there’s technology. “There is evidence that even small amounts of blue light [which is common on phones] before bedtime can shift the timing of sleep later,” the sleep doctor says, adding that some people, especially night owls, may be more sensitive to the effects of blue light than others.

Still, I don’t think all of that applies in my case. I’m (usually) good about staying off Twitter before bed, I don’t think I have a disorder (or, at least, not a sleep disorder. Others are arguable.), and while I’ve certainly blamed loud neighbors and snoring roommates in the past for my own inability to sleep, I now live in an area so quiet that the loudest sound I hear is my girlfriend’s breathing and the occasional sea lion bark. Noise, light, temperature, and tech really are not an issue, yet sleep, most nights, still eludes me. So if it’s not environmental, and I don’t have a disease, who is to blame?

Turns out, it’s my dad’s fault. “The ability to fall asleep may be dependent on genetics, with some people having a predisposition towards a longer sleep-onset latency. Both the sleep drive and circadian rhythm would be genetically influenced,” Peters-Mathews says. This is no surprise, at least looking at my own family history. My dad and I both have trouble falling asleep, we both listen to the radio at night, we both sleep with pillows over our heads, and we both tell people that sleeping with pillows over our heads turned our hair curly. I can’t sleep because he can’t or something.

So what’s to be done, other than getting a time machine and convincing my mom to marry someone with better genetics? Peters-Mathews advises getting evaluated for sleep disorders, as well as trying to go to bed later and avoiding alcohol. But the most effective way to improve sleep, he says, is cognitive behavioral therapy for insomnia (CBT-I), which, according to the National Sleep Foundation, involves regular visits to a clinician, who will give you sleep assessments as well as sleep homework. This may include going to bed at a consistent time, avoiding naps, leaving the bedroom if you can’t fall asleep in 20 minutes, and changing lifestyle habits like smoking, drinking caffeine in the evening, or not getting regular exercise. The therapist may also teach you relaxation techniques, like meditation or deep breathing, and, perhaps most importantly, help you learn to stop worrying.

Peters-Mathews says CBT-I is generally effective in just six weeks. He also says that sleeping pills won’t actually fix chronic problems and should never be used for more than two weeks. That said, if therapy isn’t your thing and you’re stuck staring at the ceiling while your girlfriend blissfully snoozes beside you, I have it on good authority that a handful of Benadryl and 100 milligrams of THC will knock you right out, at least once.