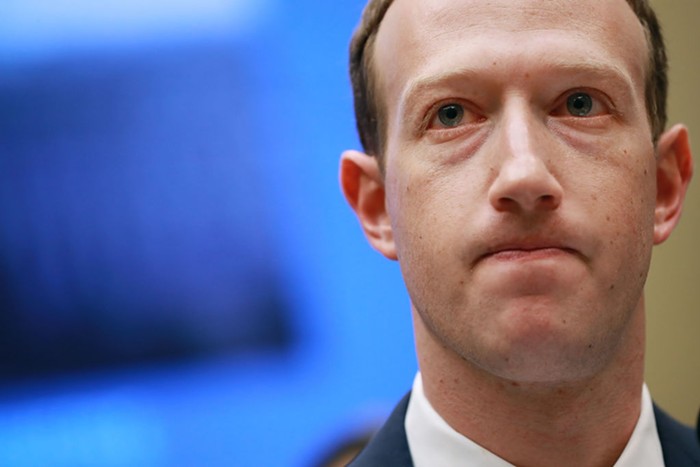 Once again, the issue is the tech giants' failure to follow state disclosure laws. Chip Somodevilla / Getty Images
Facebook and Google are again facing questions from election regulators in Washington state, who recently opened formal investigations into both companies over their local political ad practices.

The Washington State Public Disclosure Commission's formal investigation of Facebook was opened on May 21. Its formal investigation of Google was opened on June 4, exactly one year to the day after Washington State Attorney General Bob Ferguson sued both companies over what he said were years of failure to comply with this state's groundbreaking election transparency requirements.

HEY MUSICIANS! You've had 9 months to create something stupendous. Now is the time to get it sounding great.
Luna Sound can cover your production, recording & mixing needs. Mention the Stranger ad for a 15% discount!

Election ads on digital platforms have been under scrutiny ever since Russia's interference in the 2016 presidential election showed that online ads are easily weaponized and, at the federal level, pretty much unregulated in comparison with political ads delivered by television, radio, or newspapers.

But here in Washington state, unique and longstanding local laws require digital platforms, including Facebook and Google, to disclose detailed and timely information on any political ads they sell to influence this state's elections—and to provide such information to "any person" who asks.

That's been a major problem for both companies.

A Lawsuit, a Settlement, and New Investigations

After The Stranger published a series of stories in 2017 and 2018 showing that Facebook and Google were failing to turn over required information on the financing and reach of local political ads, Ferguson, citing that Stranger reporting, sued the tech giants.

In December of 2018, after six months of wrangling in federal and state courts, Facebook and Google agreed to pay $455,000 to settle Ferguson's lawsuits. But their deal with the AG did not involve an admission of guilt by either company.

At the time, Ferguson did say that Facebook and Google needed to start following Washington state's disclosure laws or "they're going to hear from us again."

But instead of deciding to follow state transparency laws, both Facebook and Google simply announced bans on all local political ads in Washington state.

At the same time, both companies have claimed that, in any event, they don't have to follow Washington state law when it comes to political ads.

They cite, among other things, a controversial federal law crafted at the dawn of the internet era, Section 230 of the Federal Communications Decency Act of 1996. In a recent New York Times column, tech watchdog Kara Swisher wrote that "Section 230 was intended to spur innovation and encourage start-ups. Now it’s a shield to protect behemoths from any sensible rules."

Yet, as The Stranger has demonstrated, both companies have continued to sell political ads targeting Washington state's elections.

Google, for example, sold thousands of dollars worth of ads targeting a February 12 special election in Spokane. That Google ad deal was made with a campaign that was pushing for approval of a Spokane ballot measure to fund police and fire services through increased local taxes, and the ad plan included displaying pro-tax Google ads more than a million times on Spokane desktop computers.

There are only about 210,00 people living in Spokane and the ballot measure passed easily, garnering 64 percent approval.

Facebook, for its part, has sold political ads to multiple candidates running for Seattle City Council this year.

Those sales include ads bought by one candidate in North Seattle's District 6, Heidi Wills, at a time when another District 6 candidate, Kate Martin, had been blocked from buying Facebook political ads.

"Either we all get to run them or no one gets to run them," Martin told The Stranger in April. "The inconsistent treatment—where Facebook lets some campaigns run ads, but not others—is frustrating."

Ethan Hunter, a city council candidate in District 4, has expressed the same sentiment:

It's clear that @facebook is being unfair in the way they've decided to regulate ads on their platform for Seattle City Council candidates. Its creating an unfair playing field when it comes to advertising on one of the largest social media outlets.
— Ethan Hunter (@Hunter4Seattle) April 25, 2019

Yet Facebook, to this day, is continuing to sell political ads to some candidates running in Washington state's local elections.

Since January 1, 2019, The Stranger has documented well over 200 local political ads that Facebook's own political ad archive shows have been bought to influence Washington state races.

While many of those political ads have been sold to candidates running for Seattle City Council, political candidates in a number of other cities around Washington have been able to purchase Facebook ads, too.

In early February, citing 25 Facebook ads that had been sold to four different Seattle City Council candidates and supporters of a local ballot measure, I asked Facebook to provide me with detailed information on the financing and reach of those ads, as required by state law.

In early March, citing the Google ads sold to influence that February special election in Spokane, I submitted the same kind of request to Google.

When both companies failed to provide me with the required information, I filed complaints against Facebook and Google with the Washington State Public Disclosure Commission.

In response, high-powered lawyers for both Facebook and Google have told the PDC that because the companies have banned local political ads in Washington state, they're not subject to this state's strict disclosure laws—even though the companies, despite their bans, have collectively sold hundreds of political ads, worth thousands of dollars, to influence this year's local elections.

Google has told the PDC that its local sales of political ads represent an "illicit requisition of Google’s platform to distribute an advertisement in violation of its express policies," and therefore such ads do not "trigger the obligation for Google to collect or provide detailed information about the ad[s]."

Investigators with the PDC, apparently not buying these arguments, have now opened formal investigations that could lead to fines against Facebook and Google, a second referral to Attorney General Ferguson for potential prosecution of the tech giants, or, if the companies can reach an agreement with the PDC, some sort of less punitive resolution.

Facebook claims that it bans local political ads in this state. Yet it sells them anyway. Calo, a lawyer and professor at the University of Washington, says this could trigger a kind of FTC enforcement action that Facebook wouldn't be able to block using its usual shield, Section 230.

"Were the FTC or a state attorney general to pursue Facebook for making a deceptive statement—namely, that the company doesn’t serve political ads in the State of Washington—then I don’t think Facebook should be able to invoke Section 230 c(1) or c(2) by way of defense," Calo wrote in a statement to The Stranger.

(For deep Section 230 geeks, Calo continued: "After all, the gravamen of the complaint, in that case, would be the claim itself that you won’t find such ads on the platform, not the failure to block ads per se.")

Calo also noted that individual political candidates in Washington state don't have a right of action against Facebook under the Federal Trade Commission's regulations. So if a deceptive statement complaint were ever to be filed against Facebook over its continued political ad sales in Washington state, it would have to be done by Attorney General Ferguson or the FTC itself.