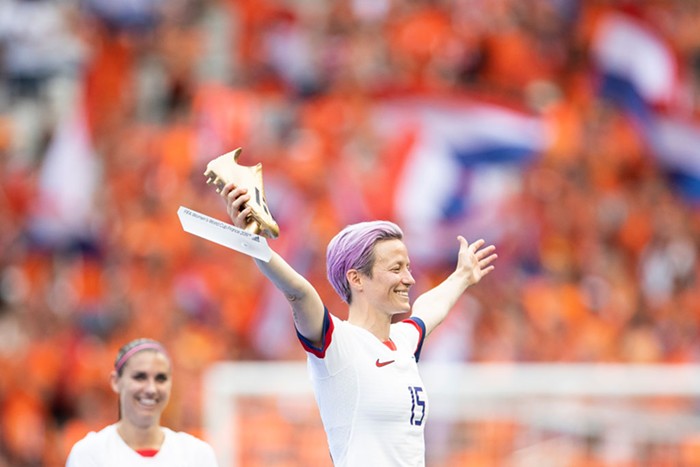 Known homosexual Megan Rapinoe after the U.S. World Cup victory on Sunday. Maja Hitij/Getty Images
There's a couple of major differences between women's soccer and men's soccer. One: The U.S. women are good at it. Two, women's soccer is a hell of a lot gayer.

Yesterday, "content producer" Alex Binley from ITV News published an article about why, exactly, so many dykes excel at this sport. It's a good question. By Binley's count, there were at least 41 openly gay players or coaches during the Women's World Cup this year. The last Men's Word Cup, in contrast, had a whopping zero. So, what gives?

According to Binley, this is largely due to homophobia. She says that men's soccer, especially outside of the U.S., is chock full of homophobes (as well as sexists and racists) who would not welcome openly gay male players in the sport. Binley spoke with a number of academics, gay soccer fans, and former players, and she writes they all agreed that the main factor is the "the stigma historically attached to homosexuality."

It's hard to argue with that. Outside of the U.S., Canada, and a few other countries, soccer is both the most popular and the butchest sport on the block. Games tend to hyper-masculine environments, which are not exactly the most welcoming of men who don't fit contemporary gender stereotypes. That's especially true in places like Russia or the Middle East, where gay people are systematically oppressed. There very well may be gay players on those national teams, or on any other, but it's hardly a surprise these players aren't coming out considering the potential repercussions.

That said, the preponderance of lesbians in elite soccer (or basketball, softball, and various other sports) is probably not only because women's sports are more inclusive than men's. If that were the case, you could expect 1 to 2 percent of the female players to be gay, the same as any other population. At the World Cup, however, the rate of out gay players and coaches was roughly 13 percent, or 6 times higher than average. And that's probably not a coincidence: According to a 2005 study, homosexual males are more likely to have stereotypically female interests (say, dance) and homosexual females are more likely to have stereotypically male interests (say, sport). So, why might this be?

Well, there is some evidence that there's a biological component to this, and this is supported by studies of people with genetic disorders. As sexologist Michael Bailey told me, girls with congenital adrenal hyperplasia (CAH)—an inherited disorder that affects the adrenal glands and results in high levels of testosterone—tend to have more masculine interests than girls with normal t-levels, down to the toys they like to play with. (Incidentally, there is also a greater likelihood that girls with CAH will grow up to be bisexual or lesbian.)

This, of course, doesn't mean that the women on elite soccer teams have CAH or elevated t-levels themselves, but it does show that there may be a biological component to both interests and sexual orientation. So while I don't doubt that there is plenty of homophobia in international soccer, especially in countries were homophobia is the cultural norm, there's good reason to believe that the 40-plus gay or bisexual women playing soccer in the World Cup isn't just because women's sports are more tolerant. It's also because dykes tend to be drawn to sports—and if you need evidence of this, it's the middle of WNBA season. Go check a game out.