An Unlovable Tree in the Heart of Seattle 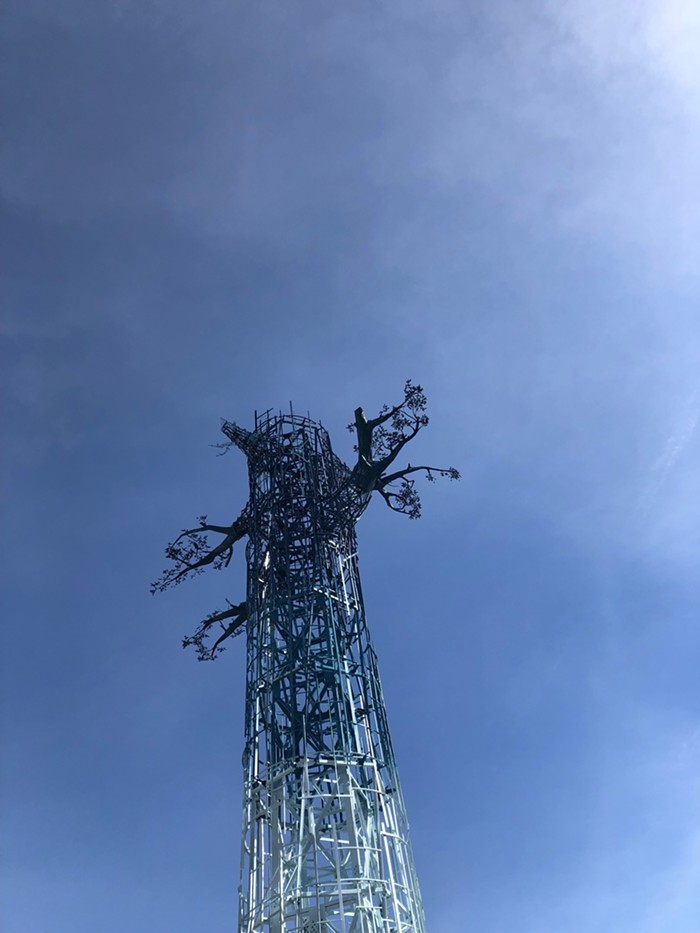 Lead Pencil Studio designed this 110 foot tall "tree," Transforest. JASMYNE KEIMIG
There is a shadeless tree in Cascade. I first saw it on a walk from Capitol Hill to Cinerama in Belltown. It was a hot morning, the kind with no clouds and only bright, blue sky. My pits were sweaty, my forehead damp. Right there, looming above the Denny Substation (itself looking like an alien spaceship nestled into the street), this structure stood rootless above me. Providing no shade.
Sponsored

This "tree" was designed by Seattle-based Lead Pencil Studios, a collective made up of architects and artists Daniel Mihalyo and Annie Han, in a project that brought together the Office of Arts and Culture, the City of Seattle, and Seattle City Light. Standing at an impressive height of 110 feet (the tallest public art in the city), the sculpture, called Transforest (that name!), is meant to resemble both an old growth tree and an electrical tower, like some genetically modified creature that pays tribute to "Seattle City Light's industrial history" and the days when all of this was just forest.

I considered it on my walk. The top seems unfinished, its branches too short. From the angle I encountered it, a continuing care retirement center served as its backdrop, the bland colors of the building's sidings (yellow, tan, beige) made the sculpture seem unremarkable. Yes, it's tall, but the texture of the steel, the color, its inorganic material against anything that was not the sky immediately diminished its impressiveness. And, from a certain vantage point, the tree appears to have stunted arms, and a long nose.

I struggled with what I was meant to marvel about this sculpture. Its ode to both the industrial and natural is immediately "get-able." Its placement next to the Denny Substation—a substation gifting reliable electrical power to the techies who live in the neighborhood and work next door in South Lake Union—provides enough context to make its dual references obvious. But did you know the substation was built on an old Greyhound maintenance facility? That it's been gravel for a while? No trees were harmed in the making of this tribute to power, but it stands on an area with a history that has almost been forgotten. 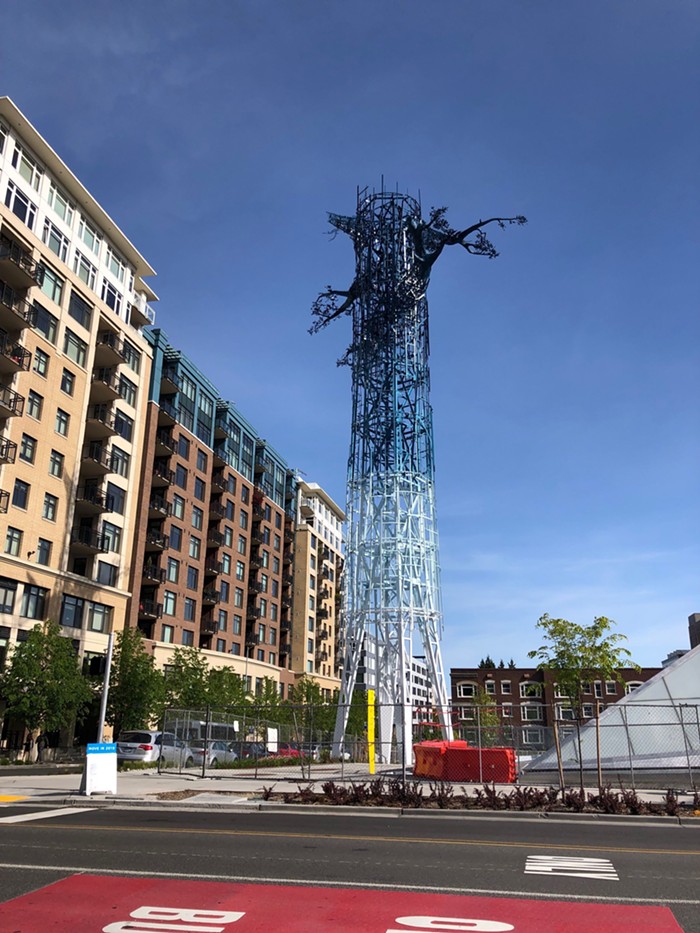 Mmmm, those colors. JK
This tree and substation are nestled into a historic area called Cascade. Bounded by the I-5 Mercer Street interchange to the north, Eastlake Ave East to the east, Denny Ave to the south, and Fairview Avenue North to the west (stick with me here), Cascade is distinct from South Lake Union. If you've had a drink at Lo-Fi, you've visited Cascade. One of the city's oldest neighborhoods and first settled by the Denny family in the 1860s, the area became home to blue collar industrial workers from many immigrant communities, namely Russians, Scandinavians, and Greeks. You can still peep the Orthodox church there today.

What used to be a historically low rent area has now turned into a tech hub that needs power. Seattle City Light purchased the site in 2009 that the Denny Substation is now on. In 2012, it demolished the bus maintenance facility, spending the next years cleaning up leftover environmental waste and constructing the substation. Before the unveiling of the permanent public art, the Office of Arts & Culture administered a 14 month long art project called All Rise on the site while the substation was still under construction, an attempt to "build awareness of what the lot will become." There's nothing that gets the creative juices flowing like (literal) power.

As the Urbanist wrote in 2015, Seattle City Light has made sure that the substation facility isn't some boring fenced off area. There is an off-leash dog park after all—and another public art installation on the substation itself, "Switchwall" (it's kinetic and plays with the wind) by Northern California-based artist Ned Kahn.

But somehow the park—and the tree—doesn't manage to inspire, but only to strangely dress up concrete and glass; nothing green to be seen here. Which is all to say that this steel structure feels like an empty gesture to prettify an area that's been industrial since as long as white people have lived here. A bad distraction from the ways in which it seems like our city is eating its own history to serve tech, rapidly becoming more glass, more concrete, grayer. The tree blends in, and when it sticks out, it's no fun to look at.

So, what else am I meant to take from this? This art? This tree?

Obviously, Transforest can't capture certain things about trees—their smell, the sound of leaves rustling in the wind, their sense of knowing. But as I stood underneath it, sweating under all that sun, trying to figure out this sculpture, I realized I was missing something simple, easily capture-able about trees—their shade. It's a primal urge, to seek refuge underneath these things. And, for a moment, I contemplated standing underneath one of the thin lines of shade provided by this steel structure. I couldn't.

If you walk just a little further down the block you'll see a green sign on Denny that reads: "CASCADE: HEART OF SEATTLE." On the middle of the sign is a portrait of a tree—gnarled, old looking. It made me think, "Is that steel tree a specific tree? A tree that was known and loved by this community, in this community?" I looked back at Transforest. There's no way that sculpture is loved by anyone. 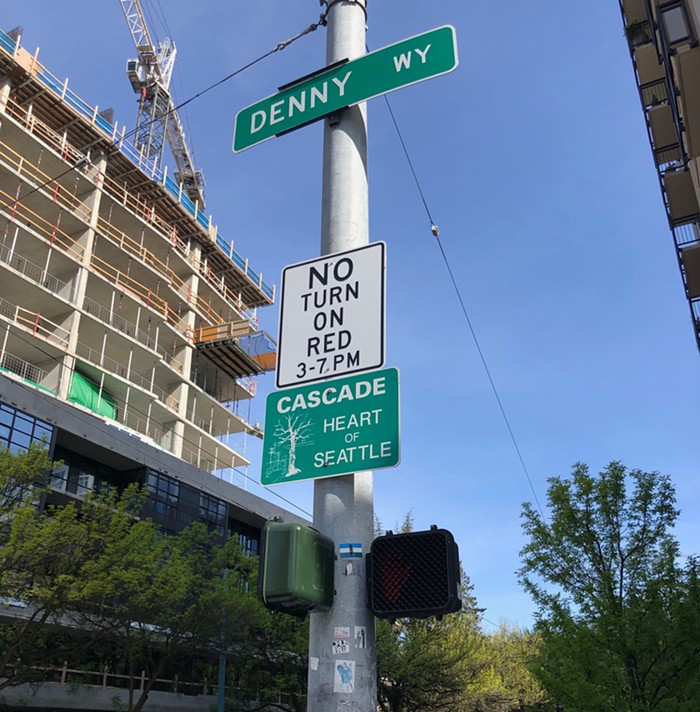 CASCADE: HEART OF SEATTLE JK
The Stranger depends on your continuing support to provide articles like this one. In return, we pledge our ongoing commitment to truthful, progressive journalism and serving our community. So if you’re able, please consider a small recurring contribution. Thank you—you are appreciated!
CONTRIBUTE NOW