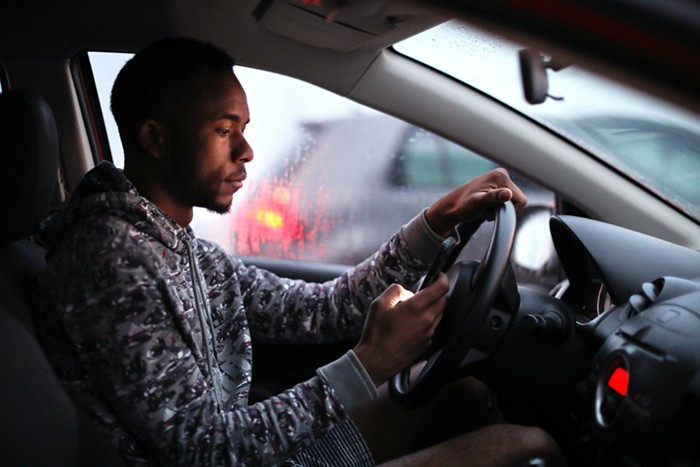 As if traffic weren't stressful enough, this guy may soon be tasked with profiling passengers. Petri Oeschger/Getty Images
On Wednesday the King County Council will vote on a motion that, in theory, is designed to stop human trafficking.

The motion, if it passes, will require the county to develop a curriculum to instruct taxi, Uber, and Lyft drivers on how to spot potential sex and human trafficking victims. Mar Brettmann is the executive director of Businesses Ending Slavery and Trafficking (BEST), a nonprofit that trains businesses on this very issue, and while the group did not immediately return a request for comment, Brettmann told KING5 that her group has helped train hotel employees.

Human trafficking certainly exists, but as for how many people are being trafficked, there is very little good data on this, either nationally or locally, says Kate Adamo, a community organizer and partner with Reframe Health and Justice who works with sex worker outreach.

“People think there is a lot more information out there than there really is,” Adamo told me. There are multiple reasons for this: For one, sex workers, both those who do it on their own volition and those who are forced into it, can be difficult to find, which is especially true now that Backpage and other sex work platforms have been shut down.

What’s more, there’s not even one clear definition of “trafficked.” There have been a couple of studies looking at specific sex worker populations—for instance, LGBTQ youth—but none have determined whether or not trafficking is an epidemic across all populations or if it’s actually rare. What Adamo does know is that, in her many years of doing outreach, the vast majority of sex worker concerns tend to be a lack stable housing and violence from the police, not trafficking.

And yet, you wouldn’t know this from much of the rhetoric surrounding this issue, and groups like BEST and others have increasingly targeted businesses thought to be hubs of trafficking, like taxis, hotels, and airlines. While this seems like a noble effort, it doesn’t always go as planned. As Elizabeth Nolan Brown, possibly the best reporter on the sex-work beat today, reported at Reason, there have been multiple cases in which employees trained to spot victims have targeted the wrong people.

In one case, employees at Frontier Airlines separated 12-year-old black boy from his white father because they assumed he was a victim and that, despite the boy's own protests to the contrary, his dad was trafficking him. Race is often the precipitating factor in cases like this, and as Brown writes, “the only victims who seem to be unearthed in real life are the interracial couples and families who have been profiled and accused.”

While there is some logic to the idea that Lyft drivers would encounter victims more often than, say, archeologists, Adamo says there is no reason to put the burden of identifying these people on drivers. What it may do instead is alienate their passengers, whether they are sex workers or not. “It is incredibly othering,” she says. “If one of the issues is that sex workers are stigmatized, that they feel isolated, than asking random people to profile them and then possibly call the cops is the worst possible idea.”

Adamo says similar plans have been tried in New York, where in 2012 the City Council passed an anti-trafficking bill that penalized taxi drivers who knowingly transported sex workers. Both sex workers and drivers opposed this, as did then-Mayor Michael Bloomberg, who told a radio station that it was just too difficult to tell who was a sex worker and who was not. Memorably, he said that if “a young lady” dressed “in a sporty way,” you could not assume she was a prostitute. (I assume he was not talking about sweats.)

There are better ways to identify the victims of trafficking. “Outreach, making meaningful connections, empowering communities, and having a safe place to go and report victimization are all best practices,” Adamo said. Profiling by Uber drivers, who already have enough to deal with, is not among them.

Note: This post originally said that BEST "supported" the motion. After it was published, Mar Brettmann clarified that the organization has taken no stand on the motion but if does pass, the group hopes to help the county develop the curriculum.

Jim Steinman, Writer of the World's Most Beautiful Screaming, Dead at 73