Is the Life Expectancy of Trans Women in the U.S. Just 35? No. 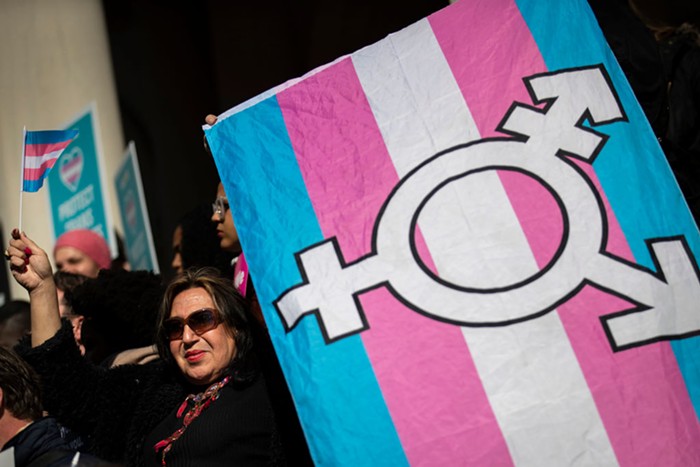 When you see a shocking statistic, look for the source. DREW ANGERER / GETTY IMAGES
"The life expectancy of trans women of color is just 35 years old."

This statistic is frequently recited by activists, allies, and the media, and it's not hard to see why. Globally, life expectancy is around 74 years for females and 70 years for males. For trans women, according to this oft-recited stat, it’s less than half that, which is clearly indicative of something horrendous going on. It is a truly shocking statistic.

Actress Patricia Arquette cited this figure at the Emmy Awards on Sunday night. When accepting an award for her portrayal of Dee Dee Blanchard in the Hulu’s series The Act, Arquette brought up her sister Alexis, a trans woman who died in 2016 at age 47.

“I just have to say I’m grateful to be working, I’m grateful at 50 to be getting the best parts of my life,” Arquette said. “But in my heart, I’m so sad. I lost my sister Alexis. Trans people are still being persecuted,” she continued. “I’m in mourning every day of my life, Alexis, and I will be for the rest of my life for you, until we change the world so trans people are not persecuted. And give them jobs. They’re human beings. Let’s get rid of this bias we have everywhere.”

She continued speaking about this backstage, where, Variety reports, the actress shared this "sobering" statistic: “Trans women of America have a life expectancy of 35 years,” Arquette said. “That is not acceptable.”

Arquette wasn't the only advocate repeating this line as of late. Pose star Indya Moore, who is trans, noted the same earlier this month. At the Fashion Media Awards, Moore wore earrings festooned with the photos of 16 black transgender women who were murdered this year in the U.S. "While we make up .6 percent of the American population, the life expectancy of trans women/femmes is 35 years old,” Moore wrote on Instagram after the show, and this stat was then picked up and repeated by W Magazine, Vogue, Teen Vogue, The Cut, etc.

Neither Arquette nor Moore specified the source of this statistic, but it's frequently repeated in the media, so it's not hard to see why they would assume that it's fact. It’s been published in the LA Review of Books, PinkNews, The Nation, USA Today, Marie Claire, BuzzFeed, FastCompany, The Advocate, The Guardian, The Charleston Post and Courier, The Root, HuffPost, The Hollywood Reporter, and on and on and on. Sometimes media reports specificy that it's trans women of color, as in the case of the British website Unliad ("Transgender Women Of Colour Have An Average Life Expectancy Of Just 35 Years") and sometimes that part is left out.

So where does this sobering statistic come from? While many of the media outlets who’ve published this fact don’t bother to cite a source, a few do. PinkNews, for instance, links it to this blog post by LGBTQ advocacy group GLAAD, which, reads, “In America, trans women of color have a life expectancy of 35 years of age while that of their cisgender counterparts is around 78. This horrifying statistic is just one example of why standing with all those in our trans community is essential to our survival.” The author links the life expectancy in the cisgender population to a CDC report, but there’s no citation for the life expectancy of trans women.

Luckily, a few outlets did more thorough citing of their sources than GLAAD. The FastCompany article, for instance, reads, "Around 65 trans people (nearly all trans women of color) have been murdered in the U.S. since 2017, according to Human Rights Watch, so it’s no wonder the average life expectancy of trans women is only between 30 and 35." The link included goes to a press release for a report entitled, “An Overview of Violence against LGBTI Persons in the Americas: a Registry Documenting Acts of Violence between January 1, 2013 and March 31, 2014.”

That report was compiled by the Inter-American Commission on Human Rights in 2015, and in it, researchers examined 594 homicides in which LGBTQ people were victims over a 15-month period. The countries surveyed included Argentina, Bolivia, Brazil, Chile, Colombia, Ecuador, Guatemala, Honduras, Jamaica, Mexico, Nicaragua, Panama, Paraguay, Peru, Suriname, the United States, Uruguay, and Venezuela, and here’s what the actual report states:

Latin American organizations report that the life expectancy of trans women in the region is between 30 and 35 years of age. According to the data collected by the IACHR, 80% of trans persons killed during a 15-month period were 35 years of age or younger. The IACHR has received consistent reports showing that trans women who are sex workers are particularly vulnerable to community violence, including killings by individuals, their clients, illegal armed groups or gangs.

Ok, so let’s parse this out. First: “Latin American organizations report that the life expectancy of trans women in the region is between 30 and 35 years of age.” There are no data attached, but evidently outlets and people who repeat this claim are extrapolating the life expectancy for trans women in the United States based on organizations that have made that claim about an entirely different region, one with some of the highest murder rates in the world. Sounds airtight.

As for the second claim, that 80 percent of trans persons killed during a 15-month period were 35 years of age or younger, that’s not particularly surprising. Homicides drop precipitously with age across all demographics: Globally, over 80 percent of all homicide victims are under the age of 44, with the bulk of victims being 29 and younger. But still, that statistic has nothing to do with the average trans woman because the average trans woman is not the victim of murder.

The IACHR did not respond to requests for comment, but this seems to be an example of reporters and activist groups failing to do basic due diligence. It becomes a big game of telephone: An activist group cites a poorly sourced press release, a reporter or blogger assumes that it’s fact, and a false statistic spreads like a particularly virulent virus. You may think that because violence against trans people is a real issue (and it is), it doesn't matter if the media exaggerates facts in order to dramatize the issue. But it does matter. Besides the fact that repeating this statistic shows gaping holes in the media’s ability to convey basic information, this incorrect statistic also has the pernicious side effect of sowing terror among trans women, who are told over and over that they can expect to die before they are old enough to run for President.

While Patricia Arquette and everyone else who cited this fake statistic are wrong about the life expectancy of trans women in the U.S., they are right when they say that trans women—particularly trans women who do sex work—are vulnerable to bias, as well as trauma and violence. This should be addressed, and raising the issue in the first place is a good first step for addressing it. But there is no evidence that life expectancy of trans women in the United States is just 35, and when you see stats that are as shocking as this, the wise thing to do is not repeat it; it's to actually go to the source.