Dalí Dreamscapes Above Some Trash on Olive

"Untitled (Couple with Their Heads Full of Clouds)"

A bit blurry and in a weird spot, but goddammit, it's a Dalí! Jasmyne Keimig
Saw this puppy while walking down the Hill from Trader Joe's on Olive. It was awkwardly placed on a pole above a herd of trash cans, so I had to lean over the garbage to take a picture of it. It's kind of rare to see Real Works Of Art on street stickers, so this felt momentous. I can't find the exact title of this piece in particular, but the Spanish artist Salvador Dalí painted several similar ones called "Untitled (Couple with Their Heads Full of Clouds)." The piece is a diptych of sorts, with two human-shaped wood panels positioned next to each other, leaning towards one another. The landscape is Daliesque—dreamscapes that recede far into the horizon, puffy clouds, mirrored images, etc. It really takes you out of the moment when you realize you're standing next to someone's waste.
Sponsored 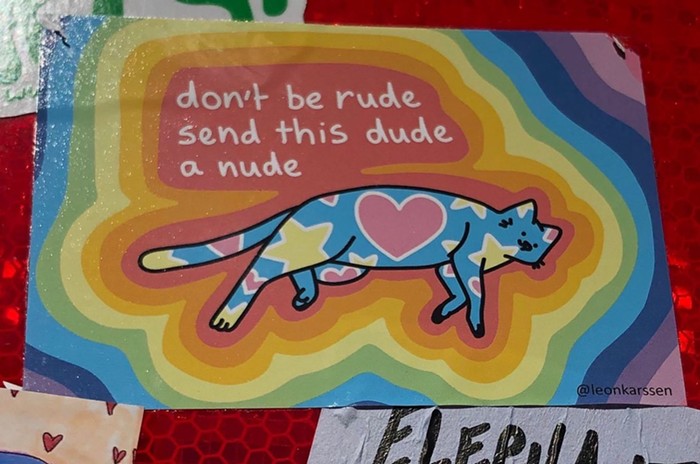 Do cats even have thumbs. JK
From Netherlands-based artist, Leon Karssen. I think I'd be open to sending nudes to a cat, but I'm allergic :(

Oh my god, I kind of love this!!!! I love ferries!! JK
Spotted this one in the Chinatown-International District while I was high as balls, right after walking through the Spacefiller exhibition for the second time (you should really go). Even though it kind of looks like the ferry is peeing, I think it's so cute and I want one. Is it possible to really love a publicly funded vehicle!?
"AIGO"

Seen a couple of these around the Pike/Pine corridor. JK
The best I can figure this one out is that it's a still of Benicio del Toro as Dr. Gonzo in the film version of Hunter S. Thompson's Fear and Loathing in Las Vegas. And that "aigo" is a Korean expression to convey frustration, exhaustion, annoyance. Please correct me if I'm wrong on that front. As far as Fear and Loathing goes, I've never seen the movie just read the book—despite a lot of things, I really like Thompson. I think about him reflecting back on the '60s in the book a lot, here's part of the quote, but you should read it in full if you haven't already:

"There was madness in any direction, at any hour. If not across the Bay, then up the Golden Gate or down 101 to Los Altos or La Honda. . . . You could strike sparks anywhere. There was a fantastic universal sense that whatever we were doing was right, that we were winning. . . .

And that, I think, was the handle—that sense of inevitable victory over the forces of Old and Evil. Not in any mean or military sense; we didn’t need that. Our energy would simply prevail. There was no point in fighting—on our side or theirs. We had all the momentum; we were riding the crest of a high and beautiful wave. . . .

So now, less than five years later, you can go up on a steep hill in Las Vegas and look West, and with the right kind of eyes you can almost see the high-water mark—that place where the wave finally broke and rolled back.”

As always, if any of these stickers belong to you, please email me at jkeimig@thestranger.com.