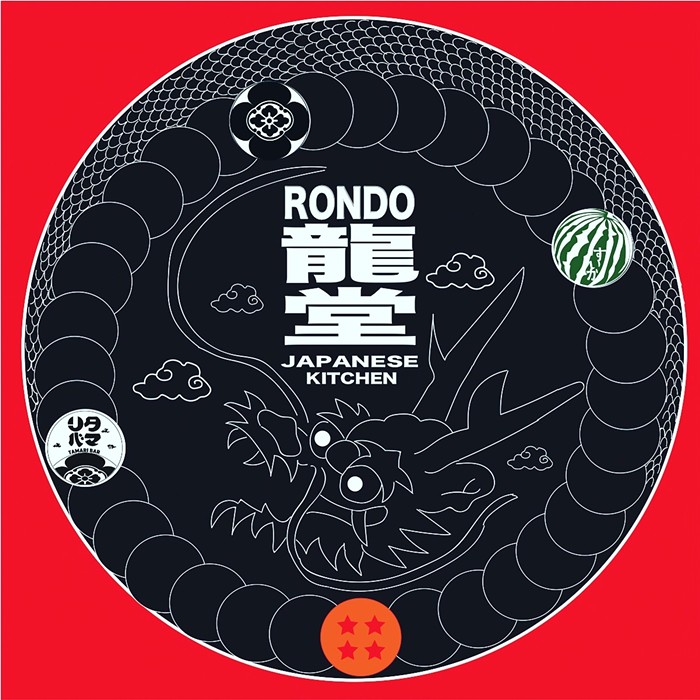 Clockwise from the top, the seals on the dragon represent Makoto Kimoto's family crest, the Suika watermelon, Dragon Ball Z (a sort of pun on "Rondo"), and Tamari Bar Mokoto Kimoto
By the end of the year, Capitol Hill will boast yet another izakaya from Makoto Kimoto, the owner of Suika and Tamari Bar, two playful Japanese pubs situated practically across the street from one another on Pine.

But for now he's just focusing on opening up Rondo, which will fill the space most recently occupied by Junkichi Robata Izakaya at 224 Broadway E. Last month, Capitol Hill Seattle Blog reported that the restaurant, which featured a cool "customer service robot," shuttered unexpectedly.

I'm not sure why that happened, but I do know Kimoto and general manager Kan Terao are now in there redecorating the place. You can follow their progress on Instagram.

For both the menu and decor, Kimoto says he's taking some inspiration from the tale of Urashima Tarō.

The story begins when Urashima, a young fisherman, saves a turtle. To repay the favor, the turtle whisks him away to an underwater Dragon Palace. After spending several evenings earnestly romancing Princess Otohime, he swims back up to the surface with a box he's not supposed to open—a souvenir of the love he shared with the princess. Back on land, Urashima realizes that 100 years have passed, and when he opens the box—because of course he opens the box—smoke billows out of it and transforms him into an old man.

In Japanese, “ron” means dragon and “do” means palace, so "Rondo" refers to the Dragon Palace in the story. (Kimoto also says he loves dragons in general, which makes sense, because dragons rule.) In honor of the mythical beast, Kimoto says he wants to use dry ice in certain food and drink presentations, and he wants to put cold-smoked dishes on the menu.

Because the dragon in the story is a water protector, the cocktail menu will offer bubbly drinks, including sparkling sake, chūhai, and Sapporo beer. They'll also make some cocktails with a brand new Suntory Whisky Toki Highball machine, which creates superfine, ultra-powerful, champagne-like bubbles. This izakaya won't have a bar, though, so all the drinks will come from the kitchen.

Kimoto typically adorns his restaurants with artifacts of Japanese pop culture from the 1980s. Rondo will be the same but different. "Our goal is to surprise customers with the food, but also with the service and the environment," Kimoto said. "I just want to make a place where people walk in and say 'oh wow' look at all this!"