My👏 Sexy 👏Nurse👏 Culture 👏Is 👏Not👏 Your 👏Goddamn 👏Halloween 👏Costume 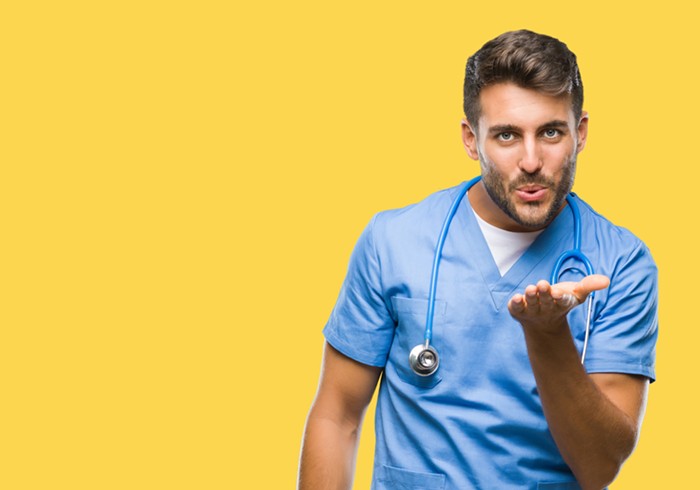 This tradition has, in recent years, become institutionalized. In 2015, for instance, administrators at Yale sent an email to undergraduate students advising them to choose culturally sensitive costumes and not to show up to the Delta Kappa party dressed like Sacagawea. But arguing over what is acceptable for other people to wear on Halloween is hardly new. People have been hyperventilating about Halloween costumes for ages, from Christians sure that dressing like Marilyn Manson would lead to Satanism (this happened when I was in high school) to feminists and prudes bothered that Halloween is an excuse to slap the word "sexy" on something and make it a costume.

Sexy nurse costumes are a frequent source of these complaints, as detailed this week in a Business Insider piece entitled, "'Sexy Nurse' Costumes Demean One of the Most In-Demand Professions in American life—and They're a Bestseller on Amazon Right Now."

The headline says it all: Some nurses are offended that their profession is a Halloween trope, particularly when the scrubs nurses actually wear are replaced with short dresses, cute little caps, and as much cleavage as can fit in a polyester nurse suit. Offended nurses told Business Insider that this costume reduces them to sex stereotypes, and a quick survey of the nurses in my own life confirmed this as well: They don't like it, although one friend told me that it's fine for nurses to dress up as sexy nurses, and then sent a pic of herself in scrubs and a very sexy fleece vest. Nurses, obviously, are not a monolith and I'm sure there are plenty who don't give a fuck if you co-opt their profession for a day (including my girlfriend, a nurse who said, "Offensive? No. Idiotic? Yes."), but still, this is definitely a trend some nurses and nurse allies reject.

But where did the idea of the sexy nurse come from? I can imagine few places less sexy than the hospital, where people literally go to die, but the sexy nurse trope has been around for ages according to Thrillist contributor Dan Gentile, who wrote in 2015, "As unbelievable as it seems, the sexy nurse stereotype actually dates back to the Protestant Reformation in the 1500s. Women were generally expected to tend to their families, and thus only the lowest class of women entered the workplace. Due to the high risk of infection and dreadful working conditions, nursing was the literally the most dead-end job around. The only job it was a step up from was prostitute, which led the ranks of nursing staffs to be populated by workers of nebulous sexual morals who would often hold down two jobs, one providing healthcare, the other providing... something else."

It's hard to imagine Thrillist accusing sex workers of having "nebulous sexual morals" four years after this was published, but when it comes to the history, Gentile may actually be right: According to a Journal of Military and Veteran's Health article about Florence Nightingale, a 19th century nurse who is often considered the founder of modern nursing, prior to the mid-1800s, "It was customary for young women of low social class to look to a life of prostitution and nursing, with the consumption of large amounts of alcohol to make the other two occupations seem a little more bearable. The average nurse when Florence was a young woman would think nothing of combining her three occupational interests in a single night; she would sit watching over her patient and sipping her gin, and if her patient was well enough and had the money, extra services could be provided."

Whatever the origins of this trope, it's popped up over and over again in film and TV. A 1982 study analyzed 191 movies from 1930 to 1980 and found that 73 percent of nurses were portrayed as sex objects. And it's not totally impossible to see why people would think of nurses as sexy: Historically, this is a female-dominated profession, and females tend to inspire male fantasies. (Consider other stereotypically female jobs, like secretaries, teachers, and babysitters, all of which make frequent appearances in pornography, as does, of course, the sexy mom.) Besides, nurses are caretakers, helping people at their most vulnerable, and, honestly, what could be sexier than that? The only thing I can think of is sexy blogger, a costume I give you all permission to appropriate.