Dolly Parton Is Not a Feminist 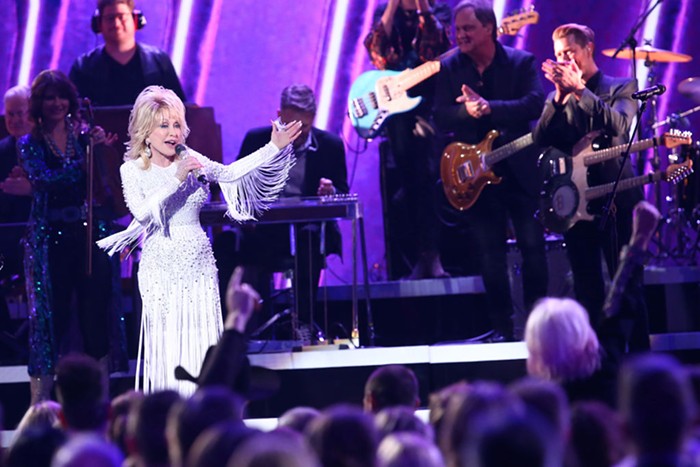 When asked if she is a feminist, Dolly Parton did not hesitate to say no way. Terry Wyatt/Getty Images
There's a moment in the new podcast Dolly Parton's America when the host, Jad Abumrad, asks Dolly an interesting question: Do you think of yourself as a feminist?

You can almost hear her recoil.

"No, I do not," she says after not even a second’s thought. It was as though he'd asked her if she would like a glass of sweet tea and urine.

"I think of myself as a woman in business,” she continued. “I love men. Cause I have a dad, I have all those brothers, all my uncles I love, my grandpas I love. I relate to them.”

A moment later, she starts singing "My Love Affair With Trains,” a song about a man who has the desire to leave home and see the world but stays to be with his wife and family. It was written by Dolly and recorded by Merle Haggard, and it's one the many, many songs she’s written about complex men doing not just what’s wrong but what’s right. (Spontaneous Dolly Parton interludes, by the way, are one of the joys of the podcast.)

Then they come back to the question. “That word,” Dolly says. “I guess when you say ‘feminist’... I don't believe in crucifying a whole group just because a few people have made mistakes.” I wasn’t sure, for a second, if she was referring to feminists or to men, but it’s quickly made clear: ‘The word 'feminist' is like ‘I hate all men.’”

She might be one of the most successful women in American history, but a "feminist" she is not.

Abumrad takes this news to Sarah Smarsh, a feminist journalist and the author of Heartland: A Memoir of Working Hard and Being Broke in the Richest Country on Earth. Smarsh is has written quite about a bit about Dolly, and she argues that she could really be considered the first third-wave, sex-positive feminist. The news that her feminist hero doesn’t consider herself as a feminist must have come as something of a shock.

“So did she say no or was she just evasive?” Smarsh asks.

“It was like I dropped a word bomb,” Abrumrad tells her.

Their exchange reminded me of a conversation I had some years ago with a friend of mine who was a bit older than me. We were at a bar (a bar, in fact, that she owned) and for some reason—I don’t remember how it came up—she said she wasn’t a feminist.

I wasn’t just surprised, I was actually mad. Here was this woman—one of the strongest, fiercest, most successful women I knew—saying she’s not a feminist? What the fuck? Didn't she care about women? “You’re definitely a feminist,” I told her. “You just can’t see it.”

My friend’s rationale, like Dolly’s, was that she didn’t hate men. In fact, she was rather fond of them. I argued with her that feminism wasn’t about hating men, it was about equality and women’s liberation, but she was unconvinced. To her, feminists were a stereotype: man-hating probable dykes with hairy legs and butchered haircuts.

In my case, she was right: I was a hairy-legged dyke with a butchered haircut, and while I probably wouldn’t have said that I hated all men, I certainly blamed them for the world's evils.

Just name a problem, and there was probably a man at the root of it. From climate change (let’s go ahead and blame Henry Ford for that one) to my personal lack of income (the fault of my boss, who wasn't just The Man, he was a man). I was so convinced that men were the root of all evil that I had a recurring fantasy in which I spiked the nation’s water supply with estrogen. (This is not a joke. I wrote more than one essay about this scenario, which, thank god, no would publish.)

Of course, feminism isn’t really about neutering men—or, at least, not all of it. There certainly are strains of man-hating feminists out there, although I think social media (with its Male Tears coffee mugs and #MenAreTrash hashtags) certainly can make this strain of feminism seem more common than it probably is. Even women who say they hate men, I suspect, tend to mean it abstractly. They make exceptions for boyfriends, husbands, dads if they aren't assholes—and, if pressed, will often say it’s not the individual they hate, it’s the patriarchy.

And then there’s another strain of feminist-come-lately. Such a person has never read Steinem or Butler and might think the Feminine Mystique is a new dating show, but she definitely loved Lemonade, shouts her abortion, and buys t-shirts reading “The Future is Female” or “Nevertheless, She Persisted” for her nieces and, if she’s really feeling radical, her nephews. She might not call her representative in Congress, but she does post feminist memes on Instagram and on Twitter.

And then there are women like both Dolly and my old friend from the bar: Women who embody the spirit of feminism but reject the label. I wanted to see if anything has changed in the years since my friend first broke my heart by refusing to adopt a label that I personally cared about, so I checked in this week, asking if she considers herself a feminist today.

“I believe the meaning of the word has expanded,” she told me, “or maybe it’s meaning changed for me. What I understand now is that more women haven’t have the advantages I’ve had and so it’s important to speak up.”

There is a small bit of irony here. I was raised by a feminist who took me to my first march for women's lib in elementary school: I remember a speaker saying that bras are just modern-day corsets and I resolved not to wear one when the time came (it never did). I was a life-long feminist, or so I thought, and when my friend and I first had this conversation, I was so dogmatic about it that I assumed any woman who rejected the label was either blind or self-hating. And yet, a decade later, I’m the one, not my friend, who doesn’t call myself a feminist.

This isn’t because I don’t believe in equality and women’s liberation—I certainly do, and I thank feminists, both early and more recent, for creating a world in which my life choices aren’t limited by sex. Feminists do vital work, especially in developing nations where patriarchy really is inscribed in law.

But at the same time, I’ve realized that when one’s identity is wrapped up in any sort of movement—be it feminism or environmentalism or democratic socialism or conservativism—it becomes difficult to judge those movements on their merits alone. The desire for the movement to succeed can supplant unbiased evaluation. Or, at least, that was my experience back when I was yelling at women that they were definitely feminists even if they didn’t like it. Feminists could do no wrong, and everyone who couldn't see that was brainwashed. Or so I thought.

I didn't know this at the time, but there have been some dark moments in the history of feminism. Feminist leaders like Andrea Dworkin and Catherine McKinnon coalesced with the Christian right in an effort to outlaw the making and distribution of porn. And then, in the '80s and '90s, Gloria Steinem and other feminists propelled the myth of satanic ritual abuse. A 1993 cover of Ms. Magazine read "BELIEVE IT! Cult Ritual Abuse Exists." Turns, they were wrong, and hundreds of people across the U.S. were charged with crimes against children they didn’t commit. It wasn’t only feminists who pushed this moral panic—social workers and therapists did too, as did religious leaders and the media—but prominent feminist leaders were a major part.

More recently, many feminists think it’s fine, even necessary, to put anonymous rape allegations online, something I wholly disagree with. That doesn’t mean I don’t care about women’s equality and liberation, and it doesn't mean I don't care about rape. I care about the law and I care about justice, and it's because of that that I'm increasingly skeptical of this movement (and all other movements). Activists have a goal, but a myopic focus on such goals can mean movements warp what's true and what's right—for the purposes of furthering the movement.

This isn’t just a feminist problem; it's an activist problem. Take, for instance, environmentalists, who have done a remarkable job of alerting the public to the dangers of climate change while also pushing a false narrative that nuclear power is unequivocally dangerous. The reality is, it's not: The risks of accidents are exceedingly low, it's the most efficient form of energy we have, and it's as carbon-neutral as wind, solar power, and water.

This isn’t to say that we should abandon the dream of renewables or that nuclear energy will solve all our problems. But it is to say that environmental activists are part of the reason nuclear power is politically unfeasible. This is the sort of thing that makes it hard for me to trust activists. The more you are invested in any cause, the more impossible it comes to look at it clearly, whether it's environmentalism or feminism or anything else.

Of course, the good that feminism has done—from suffrage to work to healthcare to birth control to education for girls—has outweighed the dark moments of the movement by many orders of magnitude. And there’s still much left to accomplish, especially with reproductive rights, childcare, equal pay, representation in government, and living wages for working-class women.

But at the same time, I’ve realized that I don’t need to call myself a feminist to fight for women. In my opinion, strong identification with a label can get in the way of honest evaluation of all the things done under the banner of that label. So instead of calling myself a feminist, like Dolly, I’d rather just live it.