Tom Hanks Is No Stranger to Drag 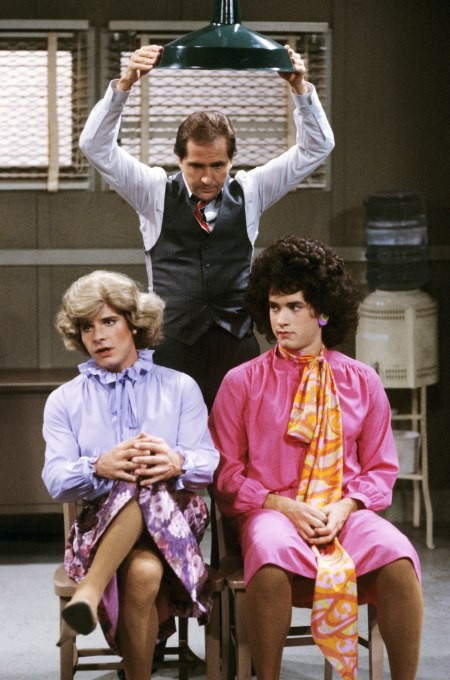 Yes, that's Tom Hanks on the right. He got his big TV break on the ABC sitcom Bosom Buddies in 1980. BOSOM BUDDIES
Unstreamable is a weekly column that recommends films and TV shows you can't find on major streaming services in the United States. This week: Tom Hanks dresses in drag in Bosom Buddies, a spell is broken in Two Friends, strippers party in Evil Toons, and Chloë Sevigny makes a cult favorite out of Demonlover. Read our other recommendations here.
Sponsored 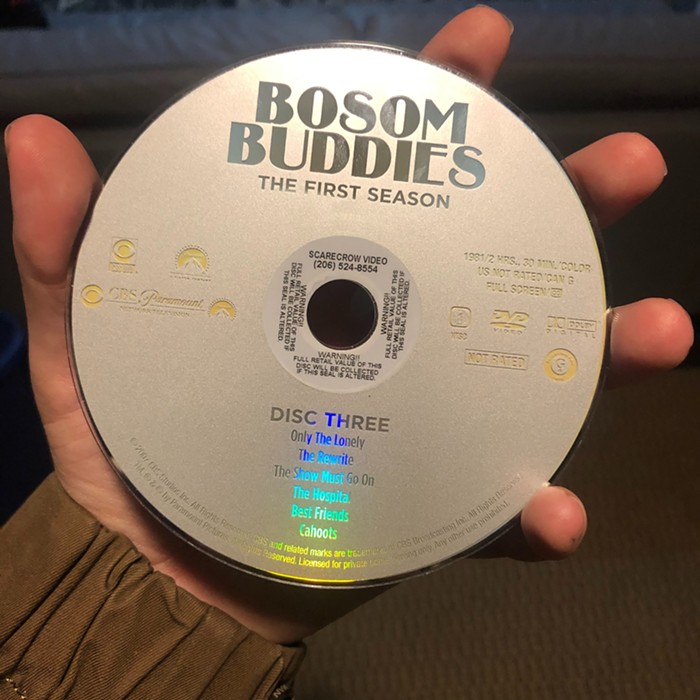 Tom Hanks and Peter Scolari were cast to play two roommates whose New York City apartment gets unexpectedly demolished. Frantic and homeless, the men end up finding a cheap apartment at the Susan B. Anthony Hotel... which is female-only. So, they move in dressed as a woman. Enter: Hildegard and Buffy, two broads who get along great with everyone, until they are discovered to be men. (Yes, it's problematic.)

The series was a hit, but the creators desperately wanted to drop the drag gig. At the start of the second season, the show wrote out the gimmick. ABC canceled it. The impact was still made. One year later, Tootsie was released and nominated for ten Academy Awards. CHASE BURNS It's complicated! JK
I was spellbound by this movie for exactly 72 minutes. And then that spell was broken.

Let me back up: Jane Campion's first feature film (made for Australian television) follows the relationship between two teen girls over the course of a year. But it's told in reverse. We arrive at the nebulous "end" of Louise and Kelly's friendship, once life circumstances separate the pair; Louise (played by Emma Coles) stays in a nice, private school while Kelly (played by Kris Bidenko) ends up squatting in an abandoned flat with her boyfriend. As we go back in time, the reasons for the dissolution of their relationship slowly become clear, as do the reasons why they were so close. But in one beautiful, dreamy sequence toward the very end, Kelly jokingly suggests that Louise is part "wog" for how dark her skin gets in the sun.

God. That was the exact moment I felt ripped in two. On one hand, I identified so deeply with the two friends. In them, I saw my own strange and fleeting friendships that I had with girls in junior high, where there was an intense intimacy despite our differences. And yet, Kelly's casual and unchecked use of a racial slur immediately overturned my sense of suspended reality, putting me back in my body. I then understood that despite the movie's universal themes and appeal, people like me were not a part of that imagined audience. And that's always disappointing. JASMYNE KEIMIG 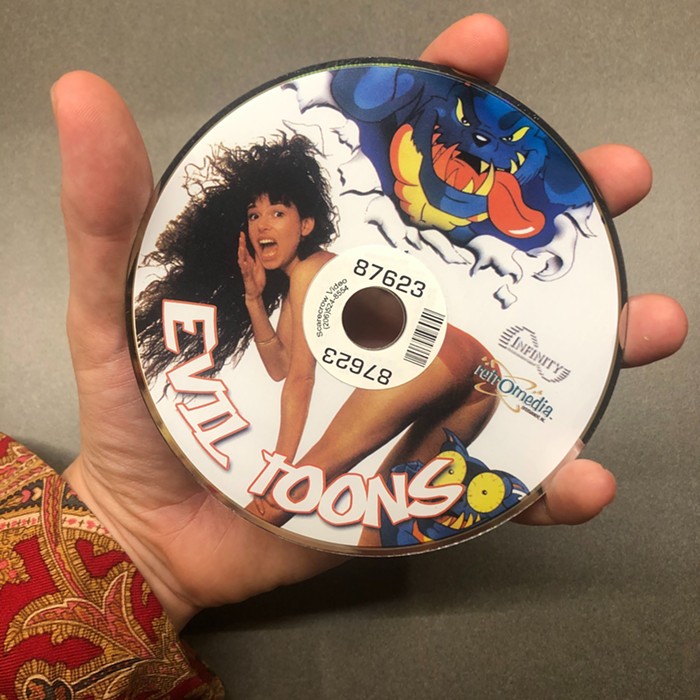 First they possess you, then they undress you. CB
I'm afraid I've opened Pandora's Box by watching this one. The premise for this cult B-movie is straightforward: A group of strippers/teens spend the night in a haunted house. A creepy stranger brings them a spooky book. The book releases evil cartoons. And then—well, I guess I won't spoil it. Just know the tagline is "first they undress you, then they possess you."

I discovered Evil Toons via Twitter user @plasticwerewolf, who described it as "like Space Jam but directed by the man who did Hollywood Chainsaw Hookers." That man is Fred Olen Ray, a prolific B-movie director who has made over 150 films, such as Dinosaur Island, Scream Queen Hot Tub Party, and Bikini Airways. He's a connoisseur of the quick and dirty, writing The New Poverty Row: Independent Filmmakers as Distributors, which seems like important theory.

Most of his films that are worth watching are unstreamable. I would love to clog up the next four months of Unstreamable with his hits (Bikini Cavegirl! Stepmonster! Beverly Hills Vamp!) but I will temper my enthusiasm and wait a month or so before mentioning this ghoul again in our very serious film column. CHASE BURNS 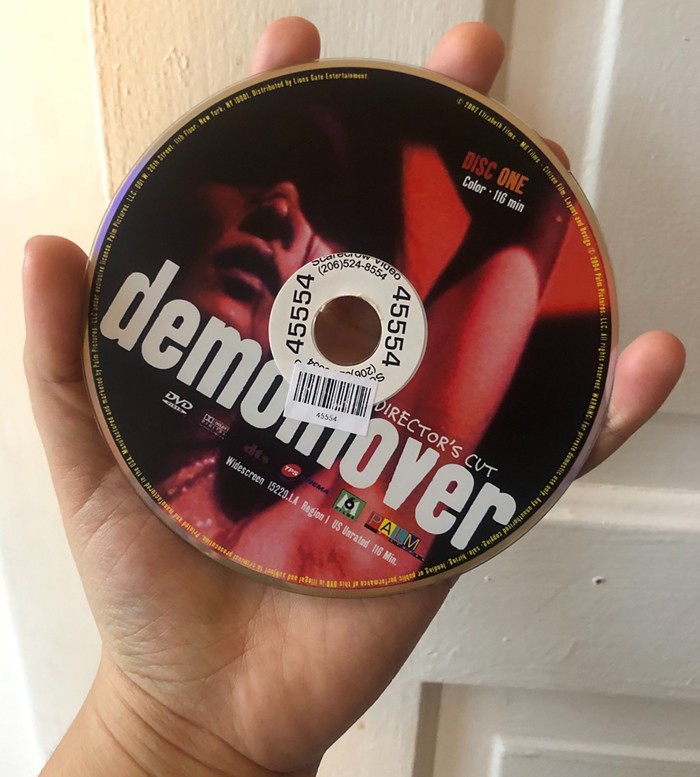 A lot. The movie hums along on intrigue and the promise of sex for at least an hour, until an absurd and violent confrontation between opposing corporate heads Diane (Connie Nielsen) and Elaine (Gina Gershon). From there, the film unspools into convoluted storylines that make gestures toward a final point, but ultimately are bogged down by graphic violence and scenes of rape. Yeesh. What's wild is that it's still watchable. Just not compelling.

It was apparently poorly received when it first premiered at Cannes. Then, it was widely panned in France, suffering what Film Comment called a "triple failure (critical, popular, and financial)." In the years since, it's become somewhat of a cult favorite for its cool aesthetic, maximal shock, and casting of Chloë Sevigny. JASMYNE KEIMIG

Available for rental on DVD at Scarecrow Video and Netflix DVD.
The Stranger depends on your continuing support to provide articles like this one. In return, we pledge our ongoing commitment to truthful, progressive journalism and serving our community. So if you’re able, please consider a small recurring contribution. Thank you—you are appreciated!
CONTRIBUTE NOW