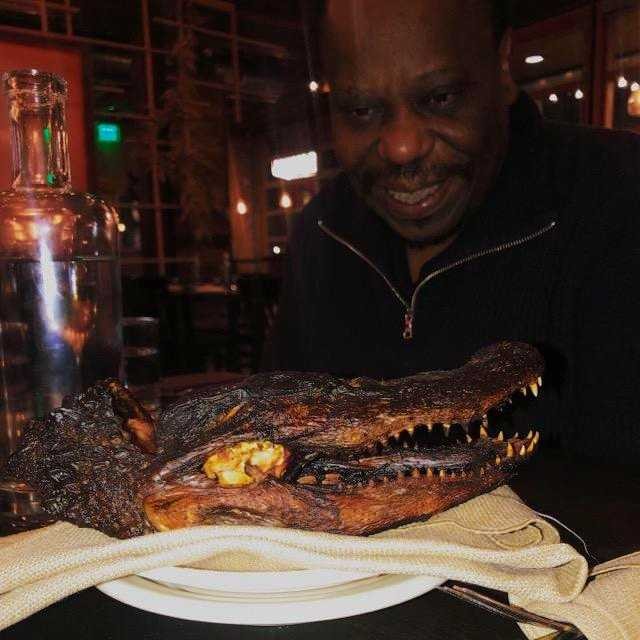 Smoked alligator in the twilight of Central Smoke, a Central District bar and smokery that closed eight days after this image was taken.
Seattle Times' article, "Is Seattle’s booming restaurant scene showing signs of slowing?" examines a spike in restaurant closures in 2019. What can it mean? Is Seattle experiencing a restaurant glut? Too many of them opened too quickly? If so, this would mean the market is presently self-correcting for a bout of investment exuberance that became irrational. In 2015, Seattle did not have enough restaurants for its booming economy, lots of entrepreneurs rushed in to meet the demand, the market rapidly became saturated, and now it is returning to a kind of equilibrium, a kind of sanity. Something of this story can also be found in the Capitol Hill Blog post on the sudden closing of a really remarkable restaurant experiment called Central Smoke on Jefferson.

This reading presents the market as a domain ruled by the unforgiving law of the survival of the fittest. But Seattle Times' food critic Bethany Jean Clement points primarily to the ever-increasing costs of living in this city—rent and utility bills are breaking the backs of businesses and customers alike. However this answer, which contains a great deal of truth and so should not be dismissed, must ultimately connect those rising costs with the boom in the tech economy, which commands a large number of high-paying jobs. But that reading, in essence, returns us to the logic of supply and demand, the law of market Darwinism. It has this story to tell: many restaurants opened to draw customers with large incomes, and at some point the number of tables in these businesses surpassed the number people who can regularly spend lots of money on meals. Meaning, again, the rise in closures is merely a market correction.

At this point, I want to offer another way of reading and narrating the current "market trend." Seattle, like San Francisco and Vancouver BC, has entered a stage of luxury urbanism that the Stanford professor Adrian Daub calls "second-wave gentrification."

At the beginning of this decade, one beloved block in San Francisco had a taqueria, a flower shop and a bookstore. Sparky’s diner, a favorite final hangout for night owls, queer teens and the blackout drunk, was open round the clock.

Today, this block of Church Street just south of Market has the kind of abandoned storefronts that are usually a shorthand for declining mill towns, not centers of the tech future. But all those closed shops are emblematic of today’s San Francisco, where even in upscale areas, the city’s economic boom can look surprisingly like an economic crisis.

What this represents is a strange, second-wave gentrification, in which an influx of well-heeled residents means not Blue Bottle coffee shops and Kinfolk-inspired interior design stores, but emptiness.

In 2015, I noticed the same developments in Seattle's sister city, Vancouver BC:

While visiting Vancouver, BC recently, I noticed that many of the rental spaces for small businesses on the drabbish Denman Street, the glamorous Robson Street, and the worldly Granville Street were empty. This wasn't the case two years ago when I visited the city on New Year's Day. Then, everything appeared to be business as usual. What had happened during my time away? Was Vancouver going through a recession that we in Seattle were completely unaware of? Did it have something to do with the collapse of the Canadian dollar? Or the crash in oil prices? A crash that played an important role in the recent electoral implosion of the Conservative Party?

A business owner on Denman Street (I had duck wings at his place, Verve Bistro) and a taxi driver on Granville Street (he drove me to Havana on Commercial Drive) told me it was one thing: Rents are too damn high. Verve Bistro restaurant went out of business the following year.

What happened in each of these very expensive cities is now happening in Seattle. This is what second-wave gentrification looks like: small businesses struggling to survive in neighborhoods transformed by the first wave of gentrification. And this brings me to a subject that's almost never mentioned in mainstream economics—namely, the economics of gentrification.

In the standard story of this urban process, which was first described by urban sociologist Ruth Glass in 1964 in her groundbreaking essay "London: Aspects of Change" (she coined the term gentrification in that piece), middle-class (and then upper-middle class) people move into a poor neighborhood to arbitrage (a house as an investment) undervalued homes (some writers have referred to this group as "pioneers"), and their presence and deeper pockets automatically increase home values. This increase attracts a wave of entrepreneurial investments. As this increase accelerates, poor people are displaced (some move to other parts of the city or to other cities or end up on the streets). Eventually, the entire character of the neighborhood is transformed.

In London, where Glass did her research, this impact had mostly class implications. In the US, it also has deep racial implications. But the consensus is that gentrification, despite some of its bad social side effects, is, in general, better than no gentrification. It's better for a city to attract business investment than to be stagnant or in decline. Does a city want to be a Seattle or a Detroit? The economic thinking of this kind of urbanism ends at that point.

But there is more to the story of gentrification, and it's only now becoming more apparent—and thanks to that Stanford professor, we can give it a name: second-wave gentrification. It is the other side of the sinister mirror that reflects what the Specials described in 1980 as a "Ghost Town." It is a city that is no longer for people or even for businesses, but just for money, which is mostly invisible. Those empty stores in Vancouver BC and San Francisco are not alone. They are accompanied by an increase of empty homes and luxury condos. The work of urban planner and professor Andrew Yan has revealed the large number of empty residences in Vancouver's value-heated housing market. Yan's findings match those mentioned in the Guardian article, when Daub, during a digression, offers another reason why the stores are empty in San Francisco: "no one is living in the condos at all." He writes: "[A] recent report found there are roughly 38,000 empty homes in San Francisco – three to five times the city’s number of homeless people."

Ruth Glass described the processes that lead to gentrification (a dramatic reduction of the government regulations in the housing market, little to no public or social housing, and the removal of all meaningful capital and price controls). But she did not describe the moment when gentrification transitions from its entrepreneurial stage (a rise in business investments, fancy restaurants, expensive supermarkets, and what have you) to the stage when the housing and commercial real estate values are thoroughly captured by speculators. This class of capitalists leads a city directly to second-wave gentrification, which is when the economic realities of the spatial city are completely separated from the global schemes and capital flows of speculators. Small businesses become ghosts, and not even souls occupy the luxury apartments.

What is the post-market solution to the situation that Seattle is now entering? You only have to visit the Hudson Yards on Manhattan's West Side to see it with your own eyes.

The billionaire buildings of Hudson Yards... Charles Mudede
Speculators will use their political power to press for the next step, which I call billionaire urbanism. This is when a city has no middle, no professionals, no culture, no public spaces, nor even the standard amenities of first-wave gentrification. It is money purified by architecture. And because so much wealth is more and more concentrated at a top that's only diminishing from view, billionaire urbanism can actually survive with complete indifference to market forces, with the competition of entrepreneurs, with the laws of supply and demand. All the value generated by those at the bottom melts into the sky-reflecting glass of empty skyscrapers.
Comments 40
Tags: Economy Charles Mudede Amazon