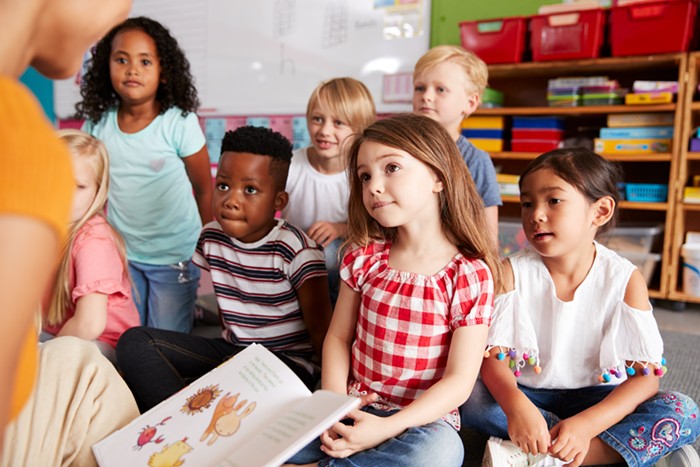 Parents of gifted students are pissed. monkeybusinessimages/Getty Images
Despite arguments and pleas from parents—as well as complaints to the attorney general’s office and intervention by the state lawmakers—this week the Seattle School Board voted to approve a proposed partnership between the non-profit Technology Access Foundation (TAF) and Washington Middle School. This is a key step in dismantling the city’s academically gifted program in its current state, which the district has been pursuing in an effort to end racial disparities in the student population the program serves.

The proposed partnership with TAF has caused months of debate between Seattle parents, students, teachers, and the district administration. Washington Middle School teachers voted not to endorse the partnership last year, but school board members and Superintendent Denise Juneau continued to push it. It will cost the district $1.1 million over the first three years and give TAF the power to hire teachers as well as design curriculum.

The Seattle Times has a good primer on what TAF does—it’s a lot of “project-based learning”—but the problem, to some parents, isn’t TAF’s curriculum; it’s that partnering with TAF will mean ending Washington Middle School’s Highly Capable Cohort (HCC), a program for gifted students that keeps them in separate classrooms for all or part of the day, where they work above their grade level in reading and math.

Once the TAF partnership is implemented, these kids will go back to the general ed classroom, where their teachers will be instructing students of all different cognitive aptitudes and abilities, some of whom are learning several grades above their level, others of whom are learning several grades behind. (A task force recommended against this until the district can prove that mainstreaming these students will actually work.)

While the majority of HCC students are white or Asian—a key complaint about the program—at the school board meeting on Wednesday, many of the parents who voiced their support of HCC were brown or black. They requested that the school board approve an amendment that would allow HCC students at Washington Middle to transfer into a different HCC program in the district.

“My request is that you please consider the disservice you would be doing to the minorities that are already in the HCC program,” one father testified on Wednesday. “The program does more for black children, particularly black boys, than it does for their peers.” He said that in his neighborhood school, his son’s cognitive abilities weren’t recognized and he was treated as a behavioral problem.

Many of the minority HCC parents I’ve spoken to over the past few months echoed this: Their kids aren't identified as academically gifted by their teachers, they get bored in the general ed classroom, and then end up being tagged as disruptive when what they need is just accelerated curriculum.

These parents would like to see the HCC program expanded to include more students of color through initiatives like universal testing, localized norms (basically, lower admission standards for under-represented students), and testing during the school week instead of on weekends—all of which have been successfully implemented in other school districts. These parents are highly aware of the racial disparities in the program, but unlike the school board, they want to fix the cohort model, not end it.

For them, the fact that the school board is dismantling the cohort at Washington Middle, a diverse school in south Seattle, but not in the whiter parts of the city, just doesn’t make sense. If the problem with the program is the lack of diversity, Washington Middle would, to them, be the place to preserve the cohort, not end it.

The district, however, was largely dismissive of these parents’ concerns. This has deeply frustrated some HCC parents, a few of whom broke into tears while testifying at Wednesday’s board meeting. Director Chandra Hampson, who is serving her first term, said the parents of color who testified against TAF were being “tokenized” and used by white parents. This, to some HCC parents of color, was patently offensive.

“It's ridiculous for board members to say that we are being ‘tokenized,’” a black HCC parent told me. “We have brains. We have minds of our own. We are not being used by anyone. Chandra Hampson should be embarrassed for saying that.”

This same parent also complained about how the school board directors used the public’s time. At one point during the nearly five-hour meeting, school board president Zachary DeWolf—who launched an unsuccessful city council campaign just a year after being elected to the school board—announced that it was his birthday and then read a poem to honor his mother.

“Look,” one parent told me. “It’s a sweet gesture but this is not a good use of that time. It’s hard for us to get to these meetings and he was ignoring our concerns while making this about himself.” She says she wasn’t surprised that the TAF agreement passed and that the amendment to allow HCC kids to transfer failed. “It's been decided from the beginning,” she said. “They tried to get the teacher vote, they couldn’t, and they kept pushing to bring in TAF in other ways. And they did it.”

Some officials at the district, however, insist that they aren’t dismantling the program at all—just changing it. At the meeting on Wednesday, Sherri Kokx, an advisor to superintendent Denise Juneau, said, "We are not dismantling HCC services. I believe we're bolstering them.”

Either way, this fight isn’t over. Earlier this month, in response to the school board’s proposal, Washington Senator Jamie Pedersen introduced Senate bill 6282, which would require school districts to create individualized learning plans for highly capable students if a district dissolves the cohort model. This would certainly be costly, especially compared to the cohort program, which is relatively inexpensive to run. (Students in the program aren’t given extra resources, they just have an accelerated curriculum.)

“I wish that this was not necessary,” Pedersen told me after his bill was introduced, “but after months of engagement, I didn’t feel like there was an adequate response from the district. I hear reports from parents who have been told, in essence, if their kids aren't getting what they need, they should send them to private schools. That is so fundamentally at odds with the role of the public school system that I felt like I could not stay silent.”

His bill is currently in committee, but whether it passes or not, the school board seems determined to bring TAF to Washington Middle no matter the cost to HCC students, whether they are white or people of color.