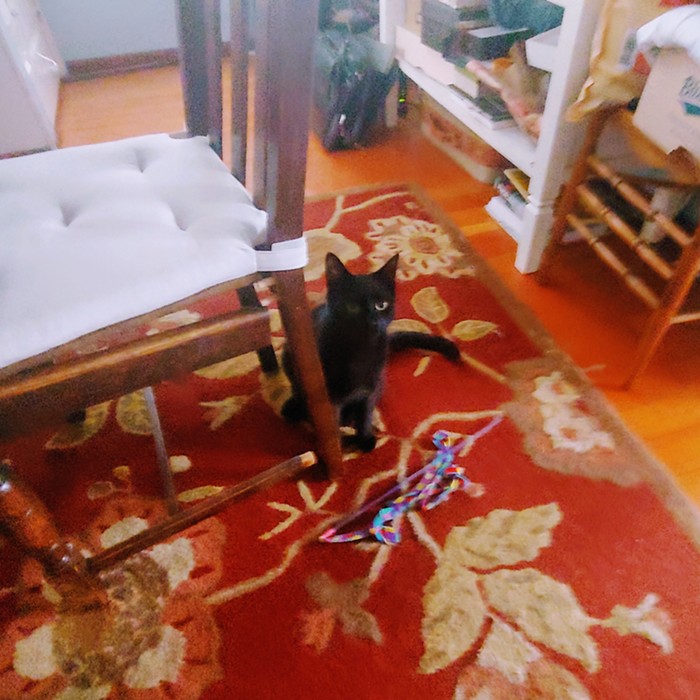 Black cat with one of his beloved objects... Charles Mudede
Because of a philosophy class I'm presenting at Hugo House, I have spent the early part of this month re-reading two books by Friedrich Nietzsche: Beyond Good and Evil, published in 1886, and On the Genealogy of Morality: A Polemic (Genealogy of Morals), published in 1887. The second work is a masterpiece of Western philosophy and world literature and must be followed, always, by reading Michel Foucault's Discipline and Punish (the latter is a masterful remix—with new and amplified and reprocessed beats—of the former). As for Beyond Good and Evil, whose first four chapters present the ground for the best parts of On Genealogy, the book would have been great if it did not spend so much time hating on women.
Sponsored

What has to be understood is that something interesting (even invaluable) can be salvaged from Nietzsche's repeated attacks on the morality of pity or brotherhood or democracy (a morality I side with). There is, in his bursts of thought, some point made about "herd morality" that does not destroy your commitment to fellow feeling but instead, blasts open doors you did not see and which let your humanist or socialist or egalitarian feelings flow into areas you had no idea existed. This is reading the bad Nietzsche who is of such good use. Reading him on women, however, is just the bad Nietzsche. One finds nothing here that can be salvaged. Instead of blasting doors open, he is repeatedly, and mind-numbingly bolts them closed. He just can't stop it. He thinks he is thinking but all he is doing exposing his own wounds that will not heal and have become a paradise of analess worms.

While reading Nietzsche's basically unreadable passages on Woman a few days ago, I suddenly realized the inspiration of Jordan Peterson's whole pro-male project. He thinks he is the Nietzsche of our ever-so softening age, our age of the Woman. I googled "Peterson" and "Beyond Good and Evil" on Saturday, January 24, and... presto!

As I said, nothing can be salvaged from Nietzsche's misogyny in the way much can be salvaged from his snobbery and even Satanism (how a Christian might view his opinions about Jesus and Christianity). But I want to examine something else in this post. It concerns my black cat's obsession with objects.

I have two cats. One is black and one is not. The black cat is very young and male. The not-black cat is female and in the twilight of her youth. I have written about the black cat here.

Now, in the 25 or so years I have lived with this species that has in its kingdom the lion as its king, Felis catus, I have never experienced one that was so much into objects: toilet paper rolls, balls, plugs, things that look mice, tub stoppers, the caps of bottles, and so on. He even has a big bunny doll that he drags around the house. What is up with that? What's this cat on? To make some sense of this, I thought about finding and rereading an essay by Graham Harman, a key figure of a movement in contemporary philosophy that's related to speculative realism and called object oriented ontology. I recalled him saying something like: No other animal is more obsessed with objects than humans. But what about my black cat?

Then I recalled something Jordan Peterson, who is not an intellectual (he is a crank), said or wrote about how men were better at engineering and occupations of that kind than women because they were naturally more object oriented than women, who were all about inner feelings and mushy things like that. This, supposedly, is what made women better nurses and bad at building bridges. Maybe my black cat is interested in objects because he is a male cat?

But if that were the case, then why is my female non-black cat at once not interested in objects or nursing? I have yet to see in her eyes and manner anything that is mushy or emotional in that sense ascribed to womankind by Peterson. Sure, she (the non-black cat) likes warm spots about the house or the warmth on the hood of a motor car, but one could hardly call her caring. The only warmth you are going to get of her is if she is sitting on you—the pure unfeeling warmth of a mid-sized mammal.

In fact, I have not come across a caring and nurse-feeling female cat in my life. As for my black cat, I honestly can't ever see his object obsession flourishing into something like what we might find at the root of a human (or male) bridge engineer or rocket scientist. He has, as far as I can tell, a very weak intelligence, or at least one that does not compare to the non-black cat, who has established a system of the life with a strictness and regularity matching that of the philosopher Nietzsche described in one of his many racist moments as the "Chinese of Konigsberg" (Immanuel Kant—the Chinese symbolized decay in his age).

But enough about cats and Peterson. And let's not even mention the crank's lobsters.

Dropping Off Your Ballot? Here's the Best Restaurant Near Each Drop Box