Amazon Employees Speak Out About Climate Change and Internal Censorship 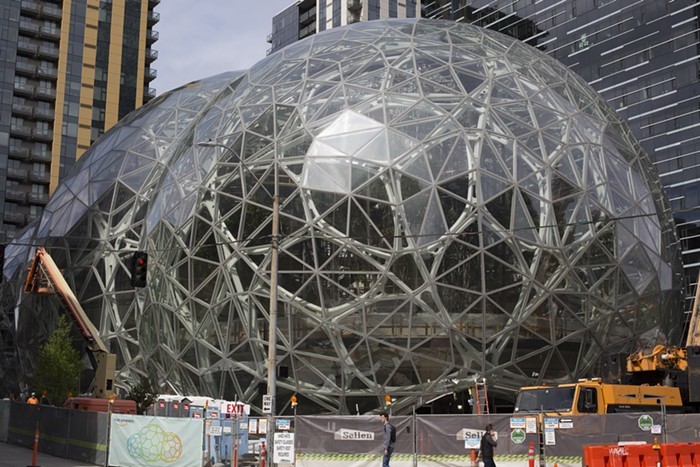 There's conflict brewing in Bezos's Balls. DAVID RYDER/GETTY IMAGES
Hundreds of Amazon employees risked their jobs this week to speak out against climate change and their employer’s role in it.
Sponsored

The employees, who are calling themselves Amazon Employees for Climate Justice, released statements and a video calling out both Amazon’s contributions to carbon emissions in the global economy and a company policy that bans employees from publicly speaking about their protest. As the Washington Post reported earlier this month, after Amazon employees started talking with the press about their concerns, the company advised them to cut it the fuck out or risk termination.

1/ Hundreds of us decided to stand up to our employer, Amazon. We are scared. But we decided we couldn’t live with ourselves if we let a policy silence us in the face of an issue of such moral gravity like the climate crisis. #AMZNSpeakOut pic.twitter.com/zWIKku4LF6
— Amazon Employees For Climate Justice (@AMZNforClimate) January 27, 2020

“Don’t get us wrong: some comms policies make a ton of sense (i.e. for confidential projects),” the group sent in an email to employees on Monday. “But allowing a corporation to silence us on its contribution to the climate crisis is a clear overreach of comms policy, and effectively demands we give up our basic humanity and integrity in order to be employees. And, it’s not just about climate: it’s also about our ability to speak up on other issues like racism and sexism in tech, treatment of warehouse workers, donations to anti-LGBTQ politicians, and complicity with ICE.”

The email went on to ask employees to sign an open letter to the company. Over 300 employees complied, and much of their criticism concerns Amazon’s continued partnerships with the fossil fuel industry despite its own advertised commitment to going carbon-free. In 2019, Amazon became the first signatory of the Climate Pledge, a pact to achieve net-zero emissions by 2040, ten years before the deadline set forth during the Paris Climate Accord. This was announced the day before a planned walk-out by 1,500 corporate employees during the 2019 worldwide Climate Strike, which may or may not have had something to do with it, but to these employees, Amazon cannot continue to tout its green bonafides at the same time that Amazon Web Services, in particular, contracts with companies extracting oil and gas.

“AWS Oil and Gas contracts jeopardize the objective of Amazon’s own Climate Pledge, which requires companies to commit to reaching Paris Agreement goals 10 years early,” wrote Justin Cambell, an Amazon data engineer, in a statement. “The Paris Agreement established a global carbon budget that allows for burning less than one-fifth of current oil and gas reserves. If AWS continues to help fossil fuel companies, like BP and Shell, discover and extract fossil fuel, it will guarantee we will NEVER meet the Paris Agreement, let alone ahead of schedule.”

Employee activism, as Geekwire notes, is part of an ongoing trend in the tech industry, with employees at places like Microsoft, Google, and Tableau walking out or otherwise protesting their own company’s climate impacts. And, as the group email from Amazon employees this week underscores, it’s not only climate change that has these workers riled up: Tech workers have also protested against their employer’s contracts with federal agencies like ICE.

Whether it’s due to stockholder and employee activism, or, perhaps, concerns about their public image, some corporations are pledging to do better. In addition to Amazon’s Climate Pledge, Microsoft announced earlier this year that by 2030, the company will be carbon negative, and by 2050, it will have offset all the carbon the company has emitted since its founding in 1975. But, as with Amazon, critics have pointed out that Microsoft continues to provide its technology to companies working on fossil fuel extraction.

If you are a tech worker and would like to talk about this or any other issue within the company, email me at kherzog@thestranger.com.