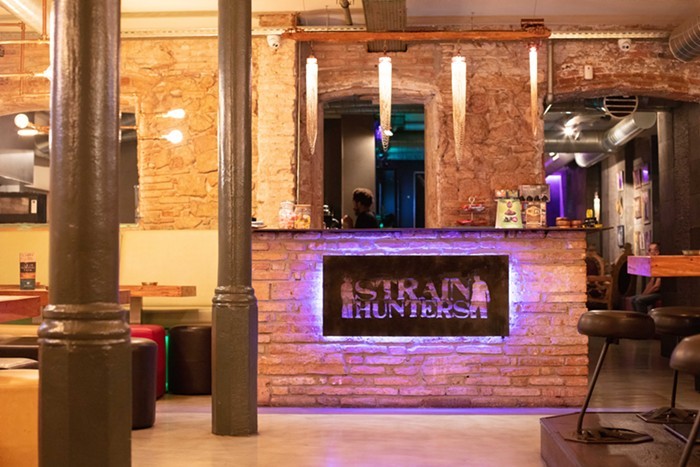 A photo I took while visiting a pot cafe in Barcelona. Lester Black
Legalizing pot consumption lounges would do a lot for Washington state. It would guarantee that renters and homeless people have a legal place to smoke pot. It would help normalize cannabis, a drug far safer than alcohol, by giving fans of pot their equivalent of a bar. And it would give tourists a place to imbibe when they can’t in their hotels or other accommodations.

Pot lounges could be one easy way to send some of legal weed’s profits to people of color.

Currently, Washington’s pot industry is overwhelmingly owned by white people. Black people and other people of color were harmed at far higher rates by pot’s prohibition, but now that our state has legalized the plant, white people are taking an overwhelming amount of legal pot’s profits.

Other states with legal weed have tried to make the pot industry more inclusive to people of color, but Washington’s government has never established a single equity program. There have been a few attempts this year to create an equity program but so far all attempts have failed miserably.

Having a license to run a pot lounge, where people can buy and smoke weed inside a café-like setting, is almost a guaranteed moneymaker thanks to massive demand for this service. If the state legalized these businesses, they could give out a limited amount of licenses and reserve at least some of those licenses for people who can prove they are from a community that was disproportionally harmed by the war on drugs.

Omar Figueroa, a California cannabis attorney who has worked on equity programs in that state, said the idea of social equity cannabis lounges made a lot of sense.

The idea of legalizing pot lounges for social equity uses has some support in Olympia. Rep. Steve Kirby, a Democrat from Tacoma, introduced a bill in 2019 that would legalize pot consumption lounges but the bill, which is still active during this legislative session, has yet to even get a public hearing.

Since his bill isn't going anywhere fast, I asked Kirby if he had ever thought about adding a social equity angle on the pot lounge idea.

“I have not heard that except right here and now,” Kirby told me last November. “When the session starts if I saw an opportunity I could move ahead with that.”

I followed up with Kirby’s staff this week—now that this year’s legislative session has started—but they said they said there had been “no changes to the bill” at this time.

Kirby told me back in November that social consumption lounges, even if they accomplish an admirable equity goal, would still face an uphill battle thanks to the anti-smoking industry.

“This is an idea that will not be without controversy,” Kirby said. "It’s about the smoking ban as much as it is about the benefits of having some sort of cannabis lounge… The anti-smoking folks are hellbent on stopping the inhaling of anything into your lungs.”

This is one of the unfortunate things about the anti-smoking and anti-drug industries. The people profiting from the fight against drugs are simply unable to understand the scientific fact that pot is not the same as tobacco.

But there isn’t evidence that secondhand pot smoke creates the same damage, or even much damage at all. A 2017 literature review in the Canadian Medical Association Journal found that exposure to secondhand pot smoke can lead to absorbing cannabinoids like THC, some self-reported psychoactive effects, and eye irritation. That’s it. No lung cancer found.

A 2005 article in the Journal of Harm Reduction was more unequivocal with this simple title: “Cannabis and tobacco smoke are not equally carcinogenic.” The article found that cannabis smoke had not been linked to causing lung cancer and, in fact, “compounds found in cannabis have been shown to kill numerous cancer types” including lung cancer.

Social consumption lounges wouldn’t hurt people; in fact they could help a lot of folks. But you’ll kill yourself if you hold your breath waiting on our state legislature changing their mind.