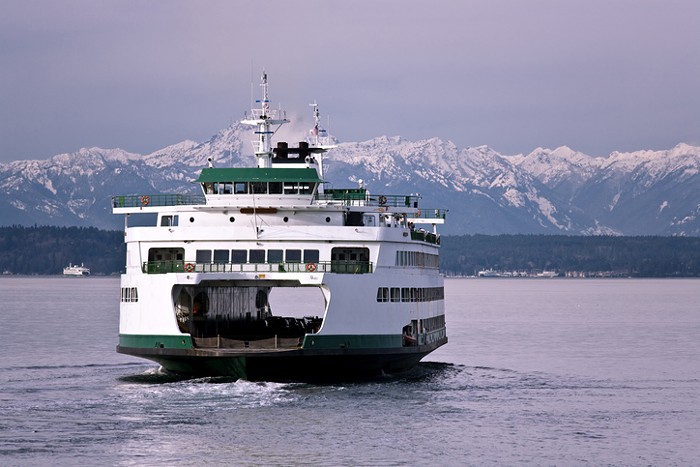 Yes, thank you, it is for personal use. urbanglimpses/Getty
Federal review for some SDOT projects: Big, unprecedented price tags on delayed projects like the downtown streetcar or the Madison Street bus rapid-transit line are asking for federal funds. But, something has given the feds pause and now they're looking into SDOT's management and design contracts. Part of this is it seems that SDOT has been paying its consultants way more than initially estimated, the Seattle Times found.

Seattle police chief's big break: Forget big-name celebrity cameos, the biggest feature of any Super Bowl ad yesterday was the Seattle Police Department's Chief Carmen Best, who got a taste of fame in a Verizon 5G ad focusing on first responders. It's literally just a picture of her which is a shame since we all know she can bust a move.

Part of Vashon Island is the least diverse part of King County: The southern part of the island is 96 percent white, according to Gene Balk at the Seattle Times. Over half of the island is older than 50, too. Inside Seattle city limits, Balk writes, the least diverse place is tied at 89 percent white between Madison Park/Broadmoor and West Seattle’s Fauntleroy/Gatewood. The most diverse in King County? Federal Way. No racial group here is more than 28 percent of the population.

Someone just bought a ferry on eBay: The longest-serving ferry in Washington history was bought by some guy from Florida for $300,000 back in 2018. For whatever reason, he had no use for an entire Washington state ferry and decided to sell it again. It just went to the highest bidder for $200,000. Talk about a sunk cost, eh? What would you even do with an entire ferry? Turn it into a floating hotel?

Not a lot of rain today: Wow, did you see that sun yesterday? I felt reborn. Anyway, today shouldn't be too wet, but more showers are on the way this week. But... maybe some snowflakes?

A weak area of convergence is bringing some showers to Central Puget Sound - mostly rain but possibly mixed with snow over the higher hills. Accumulations, if any, will be light and very localized. Showers should be tapering this morning. #wawx pic.twitter.com/iKXXwm0xbU
— NWS Seattle (@NWSSeattle) February 3, 2020

Those lucky bastards: Tacoma is getting some snow.

Reports of ❄️ mixing in with 🌧 around Tacoma. South Sound friends, what are you seeing?
— Seattle Weather Blog (@KSeattleWeather) February 3, 2020

Paradiso musical festival is in jeopardy: The summer musical festival at the Gorge is facing a lawsuit. The suit alleges that the music production company and the company's owner in charge of the festival failed to pay artists and vendors over $2 million.

I had a good time during the Super Bowl: There was an exciting game (a come-from-behind victory from the Kansas City Chiefs? Sign me up.), decent commercials (everyone loved that Bill Murray one), and the half-time show was more than half-decent, in fact, dare I say, it was actually really good. You deserve to watch this whole thing. Set a tone for your week, you know?

The Chiefs won: It was their first Super Bowl win in 50 years. The team, led by 24-year-old-still-on-his-rookie-contract Patrick Mahomes, beat the San Francisco 49ers 31-20.

Whoopsie: Trump tweeted congratulations to the wrong Kansas City last night. He said that the team represented the Great State of Kansas. The team is from Missouri.

Shooting on Greyhound bus: Dozens of people were on board the bus from Los Angeles bound for San Francisco when someone opened fire in the bus. Five people were hurt and one person was killed. The shooting took place at around 1:30 a.m.

Coronavirus death toll surpasses SARS outbreak: There have been 361 deaths from coronavirus in China. While the disease has spread to 17,205 in the country, only about 2 percent of the infected have died and people are recovering at a quick rate. With SARS, there were 5,327 cases and 349 deaths in China. The hospital crews have constructed in just 10 days is accepting patients today. Construction crews are still racing to finish it.

It's Iowa day: The caucus is today. Iowa has a pretty good—yet imperfect—track record of predicting the Democratic nominee for president. The most recent poll shows Bernie Sanders and Joe Biden tied for the win. While 11 candidates are still running, only seven seem to have a shot in Iowa. After today, really on four could conceivably have a shot at becoming the nominee. The first results will filter in around 5 p.m. Western.

The impeachment trial is drawing to a close: Four hours of closing arguments will start this morning. There will be floor speeches on the articles of impeachment on Tuesday, right before Trump's State of the Union address. Then, the whole thing will be decided and done with on Wednesday.