The Stranger Is Moving to the Chinatown-International District, Baby! 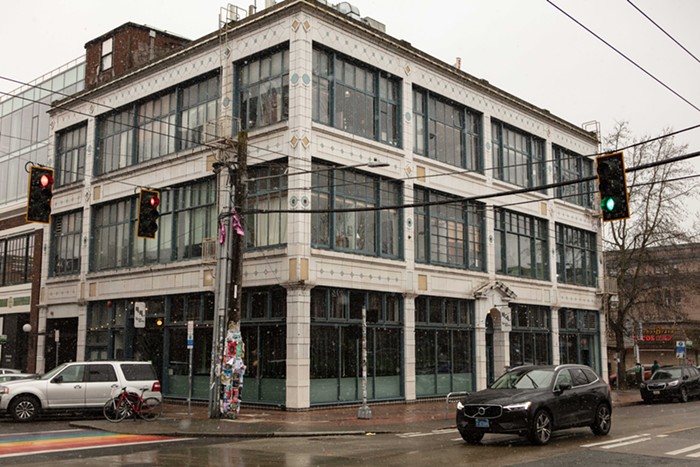 So long to our home on Capitol Hill. Lester Black
The Stranger is moving. After getting its start in Wallingford in 1991, and then spending 28 years on Capitol Hill, Seattle’s Only Newspaper has signed a new lease at a building in the Chinatown-International District that begins in July of this year and runs through 2027.
Sponsored

The Stranger is heading into this new decade with a new perch to make fun of our city from.

This news might be startling to some of our readers as Capitol Hill has almost become a character in The Stranger’s life. The Seattle neighborhood with the preponderance of rock clubs, gay bars, and hilariously dressed eccentrics has become almost an assigning editor for our writers. Its restaurants have fed us, its bars inebriated us, its residents entertained us, its pot dealers (and later pot shops) given us a buzz, and in exchange we have written irreverently and obsessively about the Hill.

But things change (especially in Seattle in this century) and we’re moving from the corner of Pine and 11th Avenue to the RDA Building on the corner of South Dearborn Street and Maynard Avenue South. It’s a historic building owned by the family of Ruby Chow, who was the first Asian American member of the King County Council. We’ll no longer be the only print newspaper in the neighborhood—NW Asian Weekly, Seattle Chinese Post, and the International Examiner are located in the area—but we’re excited to make friends.

The Stranger is moving in part thanks to the impending redevelopment of our longtime office building. To find out more about why and where we're moving, I interviewed Laurie Saito, The Stranger’s publisher, and Tim Keck, the founder and former publisher and current CEO of Index Newspapers, which owns The Stranger.

The Stranger started in 1991 in the top floor of a Wallingford duplex, but then moved fairly soon to Capitol Hill, where it has operated for more than two decades. How does it feel to be moving the paper to a new neighborhood?

Tim Keck: Well, we’ve always thought about The Stranger as a whole city newspaper, not just a one-neighborhood paper. But Capitol Hill has been great to us. It’s a part of our character and who we are. It’s just been an incredibly valuable place to be and it’s definitely shaped the paper and the feeling of the paper. For me, I’ve been walking these same two blocks for a quarter of a century. Personally, I’m ready to walk around some other block a lot.

Laurie Saito: Capitol Hill certainly informed the paper’s direction. There’s just so much going on up here. But I think change is good. I think all companies and institutions regularly need to reevaluate and take a fresh look at things and be open to new experiences.

Why was this move necessary?

Saito: We were going to have to move years ago. This building is landmarked, and they were initially going to tear it down and redevelop it just like they did to the building next door, but after it got the landmark status they could not tear it down, so this building stayed intact.

Keck: But now they have to do seismic upgrades, so there was no way we could be here.

Saito: While the possibility to work here during those upgrades was discussed, it would have created an unpleasant working environment. Having lived through that noisy redevelopment next door to us for two years, we are looking forward to not being in a shuddering building.

What was it like looking for commercial office space in Seattle’s busy commercial real estate market?

Saito: There are many things that we had to consider when looking at spaces. We were lucky that this building [in Chinatown-ID] came online while we were looking. The type of square footage that we were looking for and the types of little businesses we have within our business—our podcasts, our film festivals, our ticketing service, etc.—made it quite hard to find the right fit. There’s a lot of spaces out there, but we don’t need 20,000 square feet. But we do need more than 4,000 square feet, so it was just about finding the right fit.

Keck: And we looked at every possible space that there was on Capitol Hill, but there just wasn’t anything that was going to work for us. It’s not a knock on Capitol Hill at all. Obviously, so much of what happens in the city still happens on Capitol Hill. So many of our employees live here and many of our readers are still here, but I think putting us in a new neighborhood is great—it's going to mix things up a bit. I think it’s going to be a little jolt. It can’t help but be interesting.

Are you happy with moving to the International District?

Saito: Yes. And from the initial staff reactions internally, I'm not alone. There was a lot of excitement. There are so many dining, shopping, and other amenities around there. It’s a vibrant, interesting community. It has history, but also new businesses are popping up there all the time.

Keck: It’s like the coolest section of town. It’s super centrally located, just being by City Hall and Pioneer Square and downtown and Capitol Hill and First Hill. When we were looking at it, we were really thinking about being close to transit, and the light rail station is two blocks away. That’s a different vibe than what the city used to have. And The Stranger's world is now much more of a transit-oriented one, where you can live in different neighborhoods and come and zip in and do different things. I think our moving to the hub of transit in the city is reflective of where the paper is and where the city is.

What lunch spot are you most excited about?

Saito: From Capitol Hill, I already sometimes take trips down there to eat at Fort St. George or Fuji Sushi. Sometimes I'll breeze through the Uwajimaya food court, or even pick up some groceries while I'm there. It’s just super exciting to be so close to a great retailer. It's so diverse, that neighborhood, and such a great convergence of old-school Seattle and contemporary Seattle. Everyone in the office got excited when I mentioned this building as a possibility. There was no “why would you look there?”