A Slur, a Suicide Attempt, and Guns Akimbo 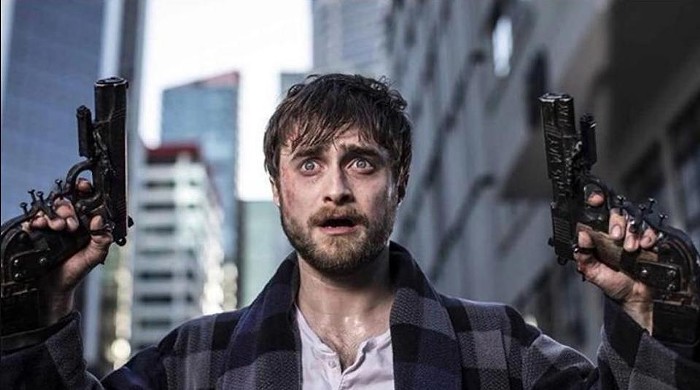 The director of Guns Akimbo, starring Daniel Radcliffe, found himself in hot water this week on social media. Saban Films
In the forthcoming film Guns Akimbo, Harry Potter franchise star Daniel Radcliffe plays Miles, a computer programmer who spends his free time trolling online trolls online. Miles' preferred forum is Skizm, a platform that has achieved massive popularity by live-streaming fights—to the death—between criminals, and his preferred hobby is to log-on and annoy all the true believers who just want to watch their death matches in peace. To get back at Miles, Skizm's kingpin and his cronies drug, kidnap, and force him into a death match of his own, and—just to make it more realistic—they also bolt guns to his hands like a particularly deadly game of Edward Fortyhands.

Considering the subject matter, it is perhaps ironic that the film was nearly canceled this week after the director got into some online trouble of his own, and it all started with a young Turkish woman who is currently based in Seattle.

But let's back up.

Last weekend, a disturbing series of videos started making the rounds on Twitter. The videos (there were three of them) have since been deleted, but in them, a young, green-haired film buff we'll call D.E. tearfully apologizes and says she took pills, drank alcohol, and scheduled the videos to post online an hour after her death. You can see blood on one of her forearms and she claims to be bleeding quite badly.

DE survived this apparent suicide attempt and is reportedly seeking treatment. But what prompted this whole thing was a four-year-old direct message that had been leaked online. That message, which was accompanied by DE's avatar, read: "I was gonna reply to this with 'nigga say what' then I was like holy shite that's racist, i can't say that on twitter." That's it. The message was leaked without context or explanation, and the backlash was immediate.

At first, D.E. denied that she wrote the offending DM, claiming it had been Photoshopped, before later admitting it was her words, apologizing, and vowing to do better. This, however, didn't help: D.E. was, at the time, the founder and editor-in-chief of a film review site called Much Ado About Cinema, and after her message leaked, the staff quit en masse, announcing their resignations on Twitter. Many of D.E.'s friends did the same, publicly cutting ties with her. That's when she tried to kill herself.

As D.E.'s videos started to spread, they were noticed by some high profile names in the film world. In a now-deleted tweet, Barry Jenkins, the director of Moonlight and If Beale Street Could Talk, wished for D.E.'s safety. Jason Lei Howden, the director of Guns Akimbo, commented on the situation as well, calling her critics "woke cyberbullies" and reportedly tweeting a list of Much Ado About Cinema contributors who had stepped down. He also minimized D.E.'s use of the term "nigga," claiming it was clearly written in jest in a private conversation. When a writer named Valerie Complex (who seems to have been on good terms with D.E. before this) responded to Howden, saying, “No one should be saying the n word at all, even in jest," he then accused her of “attempted murder with online bullying."

At that point, the attention turned from D.E.'s alleged racism to Howden's, and from the bullying of D.E. to the bullying by Jason Lei Howden. People called for the boycott and cancelation of Guns Akimbo, Complex (who did not immediately respond to a request for comment for this piece), said she was going to contact the film's studio and publicist and alert them that Howden was harassing her (and if he didn't stop, "sue him for slander and defamation"), and the press quickly picked up to the story, with Howden playing the role of the villain. Headlines read: "‘Guns Akimbo Director Tries to Combat Online Bullying by... Bullying," "Director Jason Lei Howden Used the Guns Akimbo Twitter to Harass People Online," and from the "intersectional feminist media" outlet Wear Your Voice: "How White People Deploy Dog-Whistles to Harm Black Film Critics." This piece, by Nigerian American writer Clarkisha Kent, accuses Howden of engaging in "mass harassment," and refers to the director as "an angry, belligerent, and racist white man by the name of Jason Lei Howen" (sic).

The campaign to cancel Howden may have worked, at least in the ill-defined and metaphorical sense of "cancel culture." We'll see how this impacts his ability to get work in the future. But any attempts to literally cancel his film did not. According to IndieWire Guns Akimbo is still set for release on Friday, February 28. "While we do not condone, agree or share Mr. Howden’s online behavior, which is upsetting and disturbing, we are supportive of the film and all the hard work and dedication that has gone into making Guns Akimbo," a representative from Saban Films, the movie's U.S. distributor, told IndieWire. In the meantime, Howden has deleted his Twitter.

So what can we learn from this mess of a scandal? For one, never tweet, never send direct messages, never post anything—in jest or not—that can come back and haunt you later. The internet has created a sort of permanent record for all of us, one in which there's no room for context or nuance or measured consideration. Is it possible that D.E. is an unrepentant racist with a history of abusing people of color? Yes. But is it also possible that she's a young woman who meant no harm with this particular private message? Also, yes. DR did not respond to a request for comment, but whatever the truth about her, we've entered an era in which "intention is less important than impact" is one of the tenets of social justice activism. There's no room for forgiveness, for grace, for actually learning from our mistakes instead of paying for them repeatedly and in front of everyone. That's the nature of cancel culture. And people do pay, sometimes with their lives, but more often with their jobs and reputations. When you google D.E. now, here's what you'll find: allegations of racism, a very public suicide attempt, and then, at the bottom of the results, the now-defunct Much Ado About Cinema, a labor of love that has been taken offline, either temporarily or forever.

Note: An earlier version of this post included D.E.'s full name. Upon her request, we replaced it with her initials.