What the Resuscitation of Joe Biden Tells Us About Winning Votes 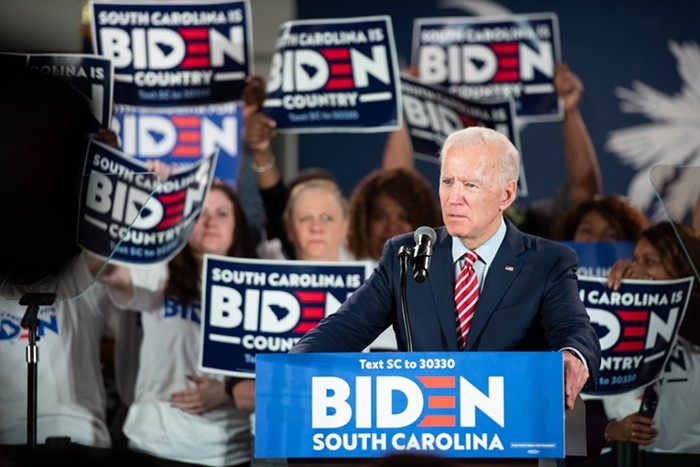 Joe Biden, back from the dead. SEAN RAYFORD / GETTY IMAGES
Joe Biden’s campaign was essentially declared dead after embarrassing losses in Iowa and New Hampshire, and so his victories in 10 of the 15 states up for grabs on Super Tuesday may have come as something of a surprise. Compared to several of the other candidates—most notably Bernie Sanders—he’s had less momentum, less grassroots support, less money to spend, and less media attention. And yet, despite a campaign that has seemed anemic at best, he’s now leading in both popular votes and delegate count.

So what have we learned?

1. Debates don’t win votes.
Biden’s debate performances have resembled the last 15 minutes of happy hour at an old folks' home. He’s been imprecise and rambling, with so little on-stage charisma that it’s easy to forget he’s even there. Elizabeth Warren has mastered the clap-back, while Joe Biden’s response to criticism is to shake his cane and yell something about Barack Obama. And yet, the people who have performed best at these debates—Warren, Cory Booker, Kamala Harris, and maybe even Mayor Pete—have either dropped out entirely or likely will at any moment.

The media covers these debates as though they will swing elections one way or the other, when actually these debates really don’t matter. This should not be a surprise: Hillary Clinton “won” every debate against Donald Trump (remember the one where he stood behind her like a spray-tanned ghoul?) and yet, he’s in the White House and she’s taking walks in Chappaqua. What this says to me is that we—and by “we,” I mean those of us in the media as well as the small sliver of the general population who watches these things like they’re the last episode of LOST—are deeply out of touch how much these things even matter. And the numbers back this up: The most-watched Democratic debate in history was the recent one in Nevada, when 19.7 million viewers watched. That might seem like a lot, but there are over 230 million eligible voters in the U.S. Clearly, they are watching something else.

Of course, money is important and campaigns often end when a candidate runs out of funding. But Biden’s success shows us that even without a massive war chest—whether it’s from your own piggy bank, corporate PACs, or small, individuals donations—candidates can still win elections. In 2016, the Clinton campaign spent over $765 million, but the Trump campaign spent just under $400 million. So what this tells me is that even in a post-Citizens United world, money actually does not win elections. And is it really that surprising? We’re flooded with ads every day, be it for political candidates or for mattresses that get shipped to your house in a box, and most of us just don’t buy them. I’m not saying advertising doesn’t ever work—the podcast-endorsed toothbrush in my bathroom is evidence that it can—but it does not seem to be a deciding factor in this election or we’d be talking about Michael Bloomberg’s Super Tuesday victories instead of Joe Biden’s.

3. Eloquence doesn’t win votes.
I was talking with my editor this morning about last night’s results and he expressed something I suspect a lot of voters—particularly Bernie supporters—are worried about right now: Joe Biden’s brain. I get it, I really do. Biden does not look good. He looks, in fact, like what he is: A 77-year-old man who should probably be enjoying his retirement at the golf club instead of running for President. He's a gaffe machine; he speaks to voters like it’s 1957 and he’s an extra in West Side Story; and during his victory speech last night he briefly mixed up his wife and his sister.

As my editor put it, “He’s rerunning Hilary’s campaign. He’s senile. He’s John Kerry.” This all may be true—although Biden’s lack of eloquence can also be attributed, at least in part, to his lifelong stutter—but it still doesn’t matter. Proof? Donald Trump is our President. The man talks like he’s stuck in a terminal game of MadLibs. He’s inarticulate, uninformed, possibly unintelligent, and yet, he’s in the White House. Being the smartest candidate, the most prepared candidate, or the most well-spoken candidate is no guarantee of victory.

4. Grassroots campaigns don't win votes.
Bernie Sanders may lose the nomination (and at this point, I would still not count him out) but regardless of the outcome of the race, he has created a grassroots campaign that far outrivals any of his opponents. He’s got bodies on the ground, with thousands of newly engaged organizers knocking on doors in their “Bernie or Bust” t-shirts. He’s got endless celebrity endorsements—from AOC to Michael Moore to Cynthia Nixon, from Killer Mike to Lizzo to Zoe Kravitz to Sarah Silverman, and basically every band on indie radio’s heavy rotation—and legions of young people doing their damn best to elect him, and yet, it still may not be enough.

5. Media endorsements don’t win votes.
Elizabeth Warren is an editorial board darling. She won (seemingly) valuable endorsements from the Des Moines Register, the New York Times, the Austin Chronicle, and the Boston Globe. And yet, even in states where those papers are located, she has yet to win a single primary or even come close. And media endorsements haven’t helped Joe Biden either. He won endorsements from the Las Vegas Sun, the Las Vegas Weekly, the San Diego Tribune, and Iowa’s Sioux City Journal—and then lost races in Nevada, California, and Iowa. Obviously, there are some cases in which the endorsed candidate does win the election, but if we go back to 2016, we can see just how little these things really matter. Hillary Clinton won endorsements from 243 daily newspapers, 148 weekly newspapers, and 15 magazines. Donald Trump won endorsements from a grand total of 26 print outlets, which was only slightly more than the 14 outlets who endorsed “Not Donald Trump.” And yet, he’s the one running for re-election.

Now, my own time at The Stranger, a paper with a remarkably successful history of endorsing winning candidates, tells me that endorsements can make a difference, but that’s mostly true in down-ballot local races, elections which people pay even less attention to than they do to national races. So while the New York Times (or the Boston Globe or The Stranger) may fight and stress and perseverate over our presidential endorsements as though we alone can swing an election, the evidence just doesn’t bear that out, at least if the most recent elections are any indication.

So what does win votes?

That, I don’t know, but here’s my guess: fame and fear. Most voters are low-information voters. They don’t know how to pronounce Amy Klobuchar’s name and the only thing they know about Pete Buttigieg (whose name no one can pronounce) is that he’s gay. They couldn’t tell you the difference between Elizabeth Warren’s healthcare plan and Bernie Sanders’s healthcare plan if the candidates came to their house with PowerPoints and explained them. So who does the low-information voter vote for? The one whose name they recognize most, which, among Democrats, is probably the one who already served as vice president.

And for the high-information Democratic voter—the ones who watch debates and listen to interviews and read articles, blog posts, and tweets—I suspect many a vote for Biden wasn’t out of a genuine sense of passion for the former VP but out of a nagging fear that no one else can beat Trump.

This is anecdotal, but I spoke to a number of Biden voters this week (all of whom who will remain nameless to protect their reputations) and one voter in Washington told me this: “I’ve never been embarrassed of my vote before but I’m afraid that America isn’t ready to elect a socialist, so I’m voting for Joe Biden. He’s the only one who can beat Donald Trump.” This was the common refrain: The people I spoke to didn’t vote for Biden because they particularly like Joe Biden (in fact, he was no one’s first choice) but because they will do whatever possible to get Trump out of office and they’ve calculated that Biden is their best bet. Whether he is or not, of course, remains to be seen.