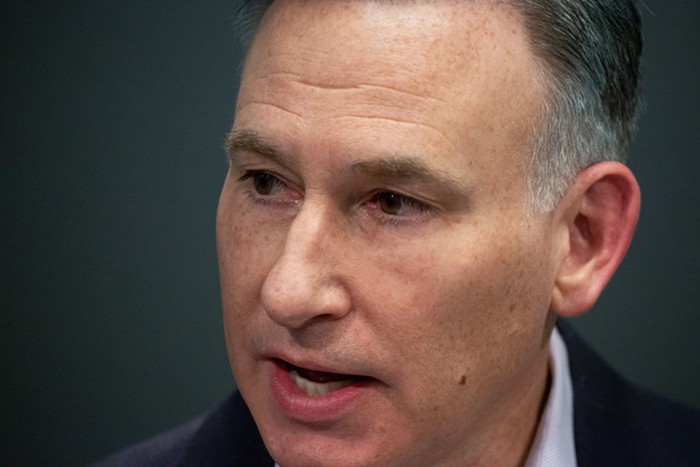 Dow Constantine has urged people to work from home if possible. David Ryder/Getty Images
Federal, state, and local officials did not mince words at a press conference today on COVID-19, the novel coronavirus that has infected a confirmed 39 patients in Washington state, including 10 deaths.

The message: Stay home if you are sick or over 60.

King County Executive Dow Constantine said that the county is asking all employees who can telecommute to work from home and is canceling all non-essential meetings for the next three weeks. The county is also suggesting all community groups to cancel or postpone large gatherings or meetings with more than 10 people. This is to protect the elderly, those with compromised immune systems, and pregnant women, according to Constantine.

He also said the city is still in the process of finding a location to quarantine and treat those who have been infected with the virus. They are focusing on a location in White Center because the county already owns the land and it has access to utilities.

Four of the deaths attributed to COVID-19 originated at Life Care, a nursing home in King County, where 50 people are reportedly being tested. A CDC official, who was also at the press conference, said they have sent physicians to the facility to help with diagnosis and treatment, but they are not encouraging residents to leave the facility at this time.

Seattle & King County Public Health Director Patty Hayes spoke about the stress to the healthcare system and noted that while 80 percent of people who contract the virus will have mild symptoms, there is no treatment and so large numbers of people showing up to ERs or doctors offices for testing will only add more stress to the already over-burdened system.

As for schools, Hayes says they are not encouraging schools to close at this time unless a student or staff member has been diagnosed with the virus. The reason for this, she said, is that children have not been shown to be a high-risk group, and if kids aren't in school, they will just go someplace else. All school closures, she added, should be decided by local schools and school systems.

More tests are expected to be available in the coming days and weeks, according to Kathy Lofi from the state Public Health Department, but there is currently only one facility operating in the Puget Sound region with the ability to process lab results, and that lab is only able to test 100 patients a day. UW will have a similar capacity up and running soon, and the state has asked labs across the state to be prepared to process coronavirus tests as well. But those with mild symptoms are being encouraged not to try to get tested but to stay home and avoid other people

"These are trying times," Constantine said, "The virus will test our resiliency and require us to act with urgency."