Bellevue Has a Skeleton in Its Carefully Organized Closet 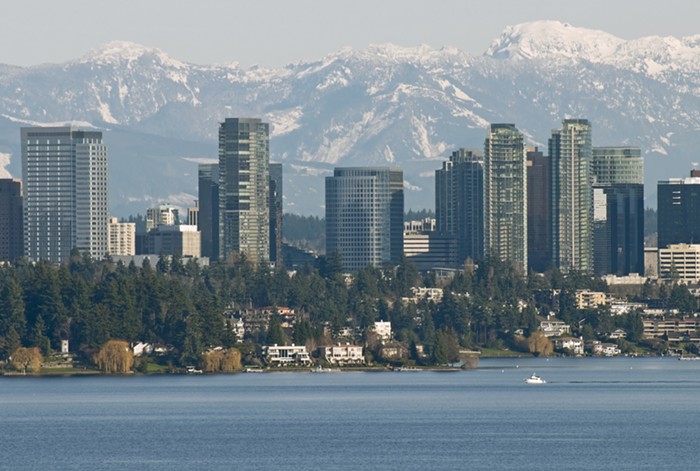 Bellevue is a beautiful city that refuses to reconcile with its ugly past, as this week's controversy at Bellevue College reveals. PhilAugustavo / Getty
Bellevue has been having a moment. As civic angst about perceived public safety issues and supposedly business unfriendly politics in Seattle reaches a fever pitch, suddenly the gleaming metropolis across the lake seems like a refuge. Amazon is growing at a rapid clip in downtown Bellevue—including the relocation of the company’s worldwide leadership team—prompting arguments that the Eastside city is the new HQ2, and might as well become HQ1 while Jeff Bezos is at it. The Macy’s flagship department store in downtown Seattle just closed while Bellevue Square defies the shopping mall apocalypse. Its booming tech economy has attracted residents from around the world, lending its demographics an impressively multicultural sheen, and local politicians’ embrace of Microsoft’s middle-income housing pledge suggest some small willingness to lower Bellevue’s gilded entry gates.

I get it. While I’m far from writing a Dear John letter to Seattle, I have my frustrating moments living here. Last weekend at Pike and Harvard, I politely suggested to a bedraggled bearded guy dragging a sleeping bag that he might be safer walking on the sidewalk than in the street. He mumbled something and gave me an unsolicited pat on the back. I told him he should ask permission before touching people. “Fuck off,” he responded and went back to walking uphill in the middle of Pike Street on a Saturday at noon.

That kind of thing doesn’t happen in Bellevue for a number of reasons. A big one is the suburban city’s political stonewalling against the necessary infrastructure for tackling our homeless crisis. Witness Bellevue’s years long debate about opening a single men’s homeless shelter and the exasperating neighborhood politics for a synagogue trying to host a sanctioned tent encampment, while Seattle City Council’s most recent budget dramatically increased tiny house villages.

The other reason I don’t get told to fuck off on the streets of Bellevue is because civic life doesn’t revolve around the streets of Bellevue like it does in Seattle, where places like the Pike/Pine Corridor are where you go to buy groceries, grab a coffee, take a yoga class, see a show, or borrow a ladder from the tool library. Despite some noise about transit-oriented development with the coming Link light rail extension, Bellevue streets are wide and primed for cars to get in and out. Specifically in and out of the Bellevue Collection, a series of shopping malls that are the true heart of Bellevue’s civic life. Security guards wouldn’t let my bedraggled new friend make it 10 feet into the Bellevue Square food court, much less walk down the up escalator (or whatever the shopping mall equivalent of walking in the middle of the street would be).

The day after my Pike/Pine fuck off encounter, I braved the parking garages to visit Bellevue Square for myself. For people with less tolerance for the unpredictability of public space, spending leisure hours in the private space of the mall is, I guess, more pleasant. I’m not a habitual mall shopper, but Bellevue Square did have one merchant I can’t find anywhere else this side of Tokyo: ROYCE’ Chocolate.

That I would trek to Bellevue Square to patronize a Japanese chocolatier is an irony upon ironies because of a controversy that unfurled over the last week. Bellevue was once the home of Japanese-American strawberry farmers, who were interned by the U.S. government during World War II. Once forcibly rounded up and shipped off to concentration camps throughout the West, the prime real estate where they farmed was more readily available for new suburban real estate development like housing subdivisions and a shopping mall.

Seattle artist Erin Shigaki recently installed a mural, Never Again is Now, at Bellevue College. It features a black-and-white 11-foot-tall image of two children photographed at a WWII-era California concentration camp. The accompanying text read, “After decades of anti-Japanese agitation, led by Eastside businessman Miller Freeman and others, the mass incarceration of Japanese Americans included the 60 families (300 individuals) who farmed Bellevue.” Freeman and his son, Kemper Freeman, developed Bellevue Square and are almost single-handedly responsible for turning Bellevue from a farming outpost to the city it is today.

According to Japanese-American history project Densho, this is not the first time references to Bellevue civic father Miller Freeman’s sordid history have been deleted from public art, like at the city’s Bellwether art festival, or suppressed from archives and news reports. And while Bellevue College Vice President Gayle Colston Barge—who whited out the line about Freeman in the artist statement—and college president Jerry Weber were fired as a result of the incident, the fact that local institutions are so sensitive about offending the Freeman family reveals the striking immaturity of Bellevue as a city, where a father-son real estate developer duo are practically untouchable.

So yes, Bellevue is squeaky clean on the surface, but its complete unwillingness to reconcile with the skeleton in Bellevue’s carefully organized closet is a sharp contrast with the city across the lake that it so likes to denigrate. Like pretty much any Euro-American settlement in the U.S., Seattle’s existence is predicated on stolen land. While far from perfect, we are mature enough as a city to at least grapple with the ugliness in our past. From Coll Thrush’s thoroughly researched history in Native Seattle to the Yehaw exhibit at ARTS at King Street Station to bike tours and museum exhibits about redlining, there is meaningful dialogue here. In some cases, there is material restitution: witness the Real Rent Duwamish grassroots campaign to pay reparations to the Duwamish Tribe.

Today’s Seattleites can rightfully shit all over the city’s 1865 leadership that passed a law banning indigenous people from city limits without fear of censorship. Until Bellevueans can freely do the same about what Miller Freeman did to their city’s Japanese American community, Bellevue barely deserves to be called a city. It’s still just a glorified shopping mall.