Can I Grow Potatoes in a Traffic Circle? 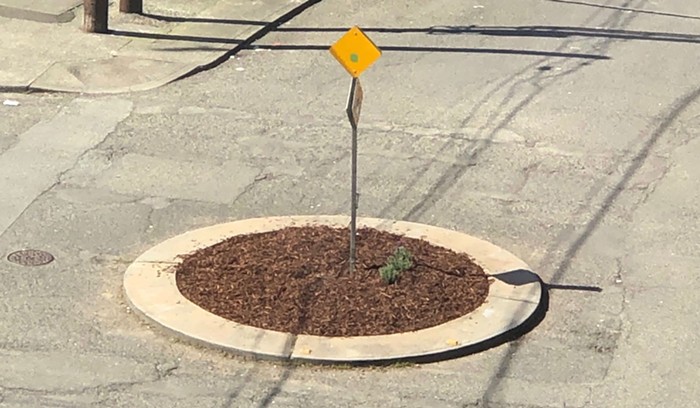 You are "heartily" encouraged to "garden in public spaces on Seattle streets"—so long as you apply for a free and easy permit. Chase Burns

UPDATE, 8/27: No potatoes, but look at that traffic circle!

ORIGINAL POST, 4/7: Over the weekend, a reader looked out the window of his fifth-floor Capitol Hill apartment and noticed something unusual. The weeds occupying the traffic circle in the street beneath him, previously left to their own sprawling agendas, were being yanked out by a determined neighbor.

It was a sunny day. As the weeding progressed, a question arose: Was the neighbor just trying to maintain his lockdown equilibrium by doing a little street-level tidying up? Or was a small victory garden in the works, promising to turn this under-utilized patch of city land into a tiny node of crisis food production?

This was not an entirely fanciful question.

Food banks in Washington state are running low as the pandemic throws more Americans into economic emergencies, and the United States has a storied history of neighbors using every scrap of dirt—"rooftops, fire escapes, empty lots, backyards"—to help feed themselves and others during times of national distress.

But the question of whether a small victory garden might be in the works inside one glum Capitol Hill traffic circle led immediately to bigger questions: Would the City of Seattle allow such a thing? Could vegetable gardens be planted in every traffic circle in the city if desired? Do we even know how many traffic circles this city has?

Many of Seattle's traffic circles are already well-tended by neighbors. The city says it would be happy if they were used for growing food. ES
At a time when the federal government is struggling to manage and track emergency equipment stockpiles, it turns out that our local government here in Seattle has been keeping very close track of its traffic circle stockpile.


A city database shows more than 1,000 Seattle traffic circles, along with a few traffic-calming islands whose shapes are described as "oval" and "other."

Almost all of them feature "landscaping," which means there's soil and an opportunity to create (or improve) the circle's plant life.

"Maintenance of the landscaping is the responsibility of the community," according to city policy, and well before the arrival of COVID-19 Seattle had a stated goal of increasing the use of such spaces for "food production and gardening."

"We heartily encourage people to apply for a free permit to garden in public spaces on Seattle streets," said Ethan Bergerson, spokesperson for the Seattle Department of Transportation.

To date, Seattle appears to have mostly focused this encouragement toward "planting strips"—those tiny lanes of arable land, often covered with grass, that lie between the sidewalk and the roadway.

But traffic circles are also "part of the public right-of-way," Bergerson said, and therefore eligible for the same gardening uses.

The free permit process can be done over e-mail and usually takes about five days.

If you acted this week, that could put you right on schedule for a timely planting of your local traffic circle with beets, carrots, artichokes, radishes, turnips, leeks, lettuce, potatoes, climbing peas, and more, according to my slightly worn copy of Seattle Tilth's Maritime Northwest Garden Guide.

Available online and through many local book and garden stores. ES
A happy harvest would of course require some dedicated tending of your traffic circle garden, including regular watering. But because of their middle-of-the-street locations, many of these circles receive more sun than a lot of home gardens that become darkened by shadows from nearby structures through the course of any day.

When May comes around, you could plant pole beans and tomatoes. By fall, the produce could be given to food banks, or, if you're harvesting for yourself, used for any number of stews and salads.

Pick the potatoes, beans, lettuce, and tomatoes, toss in a can of tuna and a few hard-boiled eggs, and you even have the makings of a slightly fancy nicoise.

One traffic circle won't feed a city or even a neighborhood, and history shows that growing urban food is hard work.

But one thousand food-producing traffic circles in the City of Seattle? That would definitely be something.