How Did the State Decide That Pot Shops Are an "Essential Business"?

An interview with Governor Inslee's senior policy advisor for liquor and cannabis issues. 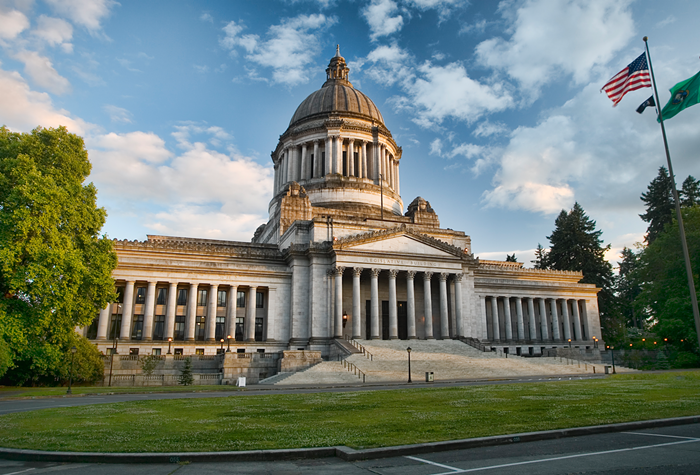 People who work in the state capitol in Olympia are practicing social distancing just like everyone else. fotoguy22/Getty Images
When The Stranger inquired with Governor Jay Inslee's office about the thinking behind pot shops' designation as an "essential business," the governor's communications director recommended we talk to senior policy advisor Sheri Sawyer.

Sawyer has worked for the governor since 2016, and her portfolio extends far beyond liquor and cannabis. She also advises the governor on issues related to gambling, public records, open government, cyber security, data privacy, and more. While we had her on the phone, we also asked about why bars are not essential businesses, whether we are ever going to see cannabis cafes, and the state's latest moves to fight against the racist War on Drugs.

Selling cannabis used to be a crime. Now it's considered "essential." How did that happen?
[Laughs.] It's pretty straightforward, right? You can only buy cannabis legally at a regulated retail outlet. You can't go to Safeway or Costco or anywhere else to buy cannabis—at least not at this point. So it was deemed essential from the governor because it's the only place to get it.

And because, for some people, it's medicine?
There are two big reasons: A lot of people rely on cannabis for medicinal purposes, even though they might not be even in our medical patient authorization database. A lot of people still rely on it to relieve anxiety and numerous other reasons people might use cannabis for medical purposes. And I think also a big factor was: If it's not going to be available at a regulated retail store, people are going to get their cannabis and they're going to get it illegally. And we are doing a pretty good job in our state of really curtailing the illicit market, and I think the fear was [closing stores] would just open it right back up. People are going to want their cannabis.

I see.
So between those two: There's nowhere else to get it, and people are going to find it somehow, why not give it to them legally?

Alcohol also works for anxiety. I was thinking if alcohol is considered essential, why are bars not open, but I guess you can get alcohol in a grocery store.
That's exactly right.

What kind of thinking goes into this question of what makes something essential or not?
That's actually a bigger question and I'm not sure I'm the right person to talk to for that. But we didn't start from scratch. We looked at what the federal government was contemplating, and certainly what California contemplated, and if you look at the list of what was deemed essential businesses for our state, it largely was based on those two things. I don't know, depending on how long this lasts, how much that will change.

Governor Inslee announcing his stay-at-home orders on March 23. Governor's Official Flickr Photo Stream
How long have you been working for the governor and what do you make of his leadership so far?
I've been working for the governor since 2016, so coming up on four years. He's been an amazing person to work for and work with. I wouldn't do it if I didn't think that his policies aligned with my personal policies. He's shown amazing leadership. Certainly he's been put to the test through this. So I couldn't be prouder to work for him. It's a fun gig.

What is the governor doing in terms of people in prison for non-violent drug offenses? Have they been expunged and released?
In January of 2019, the governor had his Marijuana Justice Initiative which basically said: Pursuant to my gubernatorial authority, I can pardon people. So anybody with a single misdemeanor marijuana conviction he was offering to pardon. And he set up a really easy-to-use website where you could fill out your application, it asked for pretty minimal information, and then he would basically pardon you, after obviously reviewing [the application] and a few other criteria. We knew the governor could only do that for state offenses. There's a lot of people who were convicted of those crimes under municipal law, and he does not have the authority to pardon those criminal convictions. So in the legislature, that following legislative session, Rep. Joe Fitzgibbon had a bill that made it state law that if you had not just a single but any marijuana misdemeanor conviction, those charges would be vacated. So that's now Washington state law.

So we don't have anyone in prison for that kind of charge?
Oh no. No, no, no. The governor recognizes that the whole War on Drugs significantly disproportionately impacted people of color, and that was a small step to try to write some of those wrongs.

And something else just passed that also helps to right the wrongs of the racist drug war.
Yes, the Liquor and Cannabis Board just had one of their requested pieces of legislation pass this last legislative session that creates a social equity program to reissue some of those cannabis retail licenses that were forfeited or were revoked. Now, if they're going to be reissued, they need to be reissued with a social-equity lens, if you will.

It's an amazing thing. At one point, that legislation seemed doomed (see here). I'm so glad it passed.
It's House Bill 2870, it was sponsored by Rep. Eric Pettigrew, who as you may know just decided he was not going to run again. Essentially, it says that any retail marijuana license that had been forfeited or revoked [since the legalization law passed]—there's between 30 and 40 of those—that the Liquor and Cannabis Board has to establish a social equity program to reissue those licenses. And before the Liquor and Cannabis Board can reissue those, there's a task force that's set up that's made up of a whole host of people that represent communities of color. I think it's a 12-member task force. And they will give recommendations to the Liquor and Cannabis Board how to best reissue those licenses. So people who were disproportionately impacted by those very harsh penalties for marijuana and other drug convictions would basically get moved to the top of the list, if you will.

It acknowledges that the War on Drugs was racist and tries to do something about that.
Exactly. You're much more eloquent than I am.

If cannabis is an essential business, and it's essential people be allowed to consume it, are we ever going to get cannabis cafes? There are lots of people—renters, tourists—who don't have a legal place to consume cannabis.
Are we ever? I think the short answer to that is yes. That will happen at some point. When? Who knows. I wouldn't be surprised, and this is just a Sheri Sawyer prediction, this is not based on anything other than what I think, but I think it might wait until cannabis is legalized on a federal basis. And I imagine that anything that were to move forward would want to consider things like local control. Our legislature usually defers to local governments about what they think is best for their communities. So I could see that happening. Or if it happened at the federal level, the same thing. So yeah, to answer your question: It will happen, but how long it will take? Who knows.

Why do you think it needs to be federally legal first? There are states—California, Colorado—that have some version of cannabis cafes.
Well I don't think we need to, I just don't know what the appetite is for the legislature. So far, that has not been something that has been given serious consideration. Things like delivery, or consumption places like you're talking about, or home grows even—the legislature just so far hasn't made that something they feel like Washingtonians are ready for. So I don't see it happening in the near future, but certainly if the Feds ever got their act together and legalized it, I think that would certainly be a time when we could see it happening. And yeah, the legislature might decide to do something before that.

Here's an oddball question, but since you are also a liquor policy advisor: In Las Vegas, you can get a cocktail to-go and walk down the street with it. Is that a way we could help bars in this state, who still want to be able to sell something so they can employ people?
I would say probably not... There's no way. There's just too much at stake. The potential for people to consume while driving is just a risk that I don't think we're willing to take. There are other ways to get your alcohol. Certainly I am incredibly empathetic to what bars and restaurants are going through. I can't even imagine what they're going through. And I know that they have a higher profit margin on alcohol than they do on food, so I get why they would want to make that available to their customers. But I just don't see that happening. There's too much risk.

That makes sense.
Some places are selling, not in a pitcher, but some sort of field container of mixed margaritas. That is happening. Restaurants and bars are selling bottles of wine [to go]. They can do that. So it is happening. But a to-go cocktail? Uh-uh. No.

The new taco window at Mezcaleria Oaxaca is one example of a place customers can buy wine to go. Christopher Frizzelle
When do you think the stay-at-home rules might start to be relaxed?
Well, not to give people a whole bunch of hope, but we're just starting to see the whole flattening of the curve, right? We're being very cautiously optimistic there, and wanting people to still stay home and stay healthy. The governor just extended the proclamation to "stay home, stay healthy" until May 4. As we start to see the number of cases taper off and social distancing and people staying home and staying healthy—as we see that it seems to be doing what it was intended to do—it seems likely that the governor would want to open things up slowly. He's not going to be like: "Oh, everybody come back to work and all the restaurants are open now, just come on in!" I could see there being some sort of "Okay, you have to limit the occupancy of some things." Kind of like how we started, right? He limited attendance at certain events. So I could see that happening in the not-too-distant future, but certainly not anytime before May 4.

As you're advising the governor on these policy questions, what are you doing in terms of social distancing? Are you working from home?
Most of us are... Today’s my first full day home. It’s kind of bizarre.

Just out of curiosity, are you Zooming with the governor, or do you talk on the phone, or is it email...?
It's by and large through Microsoft Teams. And through the phone. Some of the governor's executive team has some in-person meetings, but of course they're very, very limited. And of course they practice what they preach: good social distancing. But by and large, it's all through Microsoft Teams or Zoom or the phone. That's just how things are getting done these days.