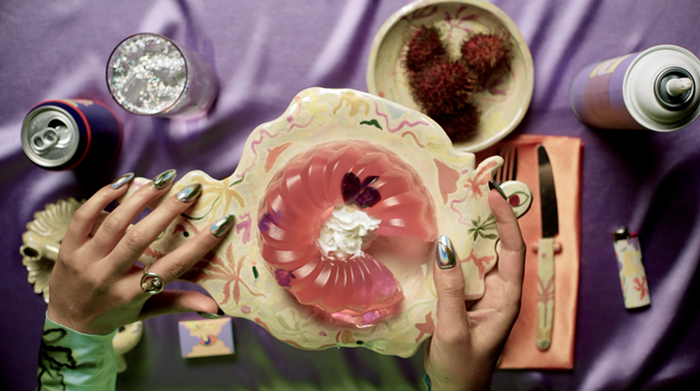 A screenshot from a very ASMR film in the 2020 festival.
SPLIFF, The Stranger's stoner film festival that runs April 17-20, was supposed to take place at the Egyptian movie theater this year, but obviously that's not happening now. However, the festival is still on. How will it work? Will there still be cash prizes? Will there still be drag queen hosts?

To get answers, I talked first to SPLIFF executive director Tracey Cataldo about the nuts and bolts of streaming and prizes. Then, for a look at the artistic side of things, I talked to Shane Wahlund, who sits on the jury for selecting films and whose side gig is Collide-O-Scope, the hilarious film collage series he created with Michael Anderson. (Collide-O-Scope is doing their usual Monday night Re-bar shows on YouTube for the moment.) I asked Shane about trends he's noticed in this year's crop of films, what his favorite films in this year's festival are, and his advice for filmmakers who have submitted films but haven't been able to make the cut.

Shane also shared a few screenshots of this year's films with me, to give you a sense of the visual range. They are embedded throughout these interviews.

Devilled eggs are one of the extra-credit items in this year's festival.
Q&A with Executive Director Tracey Cataldo

How will people be able to watch SPLIFF this year if no one is allowed to crowd into the Egyptian?
Anyone interested in attending SPLIFF 2020 will buy a ticket at splifffilmfest.com as usual. That gets them access to the event filled with drag queens, films, and even giveaways!

So if I already bought a ticket to one of the nights, it will still happen that night, I will just be watching from home?
Yes. The dates are April 17-20, with a screening each night that will take place from the safety and comfort of your own home. For all current ticket holders, their tickets will automatically be valid for the new online event. However, since the new streaming event ticket is listed $5 less than the theater event was going to be, ticket holders will be given an option to either donate the difference to our filmmakers or request a refund.

How many submissions did you receive and how many films are in the final lineup?
We received about 200 submissions this year. There are 22 films in this year's festival.

There's a lot of animation this year.
How are you doing prizes this time, with a slightly cheaper ticket price?
Twenty percent of all ticket revenue up to $10,000 will be awarded as prize money to the winners. Anything that exceeds $10,000 in prize money will be evenly distributed among the non-winners.

Do I have to wait until April 17? What if I’m bored at home alone right now and want to watch some stoner shorts?
You can stream the 2019 SPLIFF lineup online anytime for just $5! More details are over at SpliffFilmFest.com. We plan to keep the 2019 lineup available for streaming as long as people are interested in it. Last year, we only screened that lineup in Seattle, Portland, San Francisco, and Denver. This now allows our national audience to have a chance to watch as well.

But it’s too late to vote on cash prizes for the 2019 films, right?
All contributions to SPLIFF 2019 through online streaming will be shared with those filmmakers. But you're correct. Voting for the 2019 films has ended. Anyone who attends the 2020 online event will get to vote for their favorite films after the show.

How high do you think Betty and Cookie will be? And how high should the audience be?
I know Betty will be high! The audience should be high if they wish. Think about edibles! Keep those lungs healthy!

Hundreds of films are submitted, but only 22 made it into the festival. For the aspiring filmmakers out there, do you have any secret-sauce tips on how to get into this festival?
I don't know if there's a secret for getting in. I think whether you're talking SPLIFF or HUMP!—The Stranger's amateur porn festival—I think authenticity is really paramount. And as far as SPLIFF goes, it's a celebration. It's joyous. Aside from authenticity, the ones that win over the jury are ones that have a certain playfulness. That's not to say you can't explore all kinds of different terrain and be weird or a little dark. But I think there's a sense of playfulness and celebration in a lot of the ones that make it through.

When you say "authenticity," do you mean that instead of making a movie around a cliche about stoners, you should make a movie about something that actually happened when you were stoned?
Yeah, to a degree that sums up what I mean. Not trying to emulate some kind of stereotype. Because it is very subjective what people like to do when they use cannabis.

You are also the co-creator of the hilarious film collage series Collide-O-Scope. What is the secret to being funny onscreen?
Well, again, it is authenticity. Something is truly funny when it's based in reality. I kinda think if there's something relatable to it, that's where humor can shine through. One of my personal favorites this year is a very ASMR one and it's very simple, but the sound design is just ear candy. It's really intoxicating. It's this very well photographed piece focusing in on small things like a wriggling bowl of Jell-O, or the click of a lighter lighting a pipe, or exploring nails tapping. If I'm going to relate that to authenticity: To me, when I get high, I can get really, really focused on some small aspect of my surroundings, or a sensation or something that is heightened. You're lost in that for a moment, and to me that's where this film's relatability is.

To figure out what's going on here, you'll just have to watch.
Have you noticed any trends this year compared to last year?
There's more animated films in this year, and in a pretty wide variety of styles. There's cartoon stuff, there's old-school psychedelic stuff, there's some really compelling three-dimensional CGI stuff. That's just one thing I noticed.

What else?
There were more strong narrative pieces again this year, narratives that are kind of pushing the boundaries of what you would call a stoner film—which is a part of what SPLIFF is about. The films that succeed most in SPLIFF are the ones that push those boundaries and explore outside. Like, you know, films that aren't just about people sitting around smoking weed on a couch, although that can be represented because it's part of the culture. There's some really good slow-burn comedy ones.

Are there any devilled eggs?
There's devilled eggs, and they are prevalent. People went for the extra credit items, so devilled eggs will make a number of appearances.

Any other favorites this year?
There's another one that's like a minute long and super well edited and directed and to me it's funny and really stupid and it made me giggle the most. At first, you think it's going to be two annoying dudes sitting there getting stoned toegther. But it's basically just these two guys sitting there, and one's like, "Let's get high," and the other one's like, "No, you know how you get when you get high." And we get a visual recall of what this guy's done when he gets really high. It's so simple, but the execution of it is just really spot on, and it milks a lot of comedy out of it. And it's got devilled eggs.

On a scale of 1 to 10, how stoned should people be for watching this festival?
Um, 10. Do it. Yeah. Absolutely. The thing is, there's such a wide variety of stuff in here, from the absurd and abstract to the more straightforward narrative. But it's all going to be enhanced by being as stoned as you can possibly be.