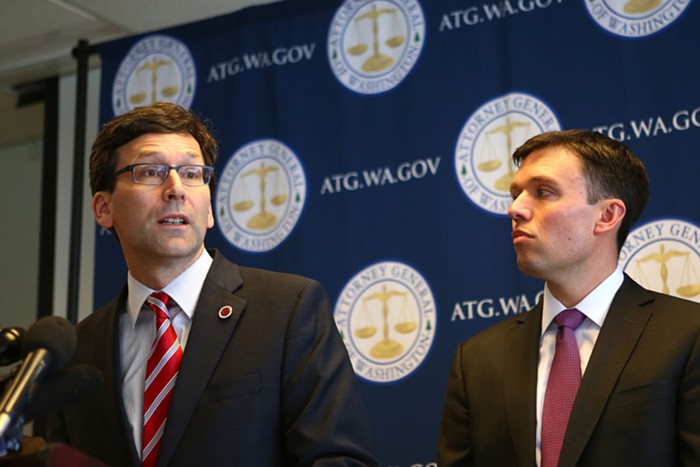 Although online political ads remain virtually unregulated at the federal level, Washington state has, since the early 1970s, required all political ad-sellers to make significant disclosures about the financing and reach of paid messages intended to sway voters in local elections and ballot measure fights.

Facebook, the new lawsuit from Ferguson claims, is "intentionally" continuing to break this law.

"Whether you’re a tech giant or a small newspaper, those who sell political ads must follow our campaign finance law,” Ferguson said. "Washingtonians have a right to know who’s behind the ads seeking to influence their vote."

About six months later, Facebook settled that lawsuit by paying $200,000 to Washington state, plus $38,000 for the state's legal costs.

The terms of that settlement did not require Facebook to admit guilt, but Ferguson warned that the company needed to start complying with Washington state disclosure law right away or else "they’re going to hear from us again.”

He noted that he pays special attention to cases involving repeat offenders.

"Facebook subsequently announced a new policy that it would no longer sell Washington state political ads," the AG's office said in a statement today, explaining the background for the new lawsuit.

Ferguson had not asked Facebook to stop selling ads in Washington state. His December 2018 settlement with the company said nothing about such a move. Instead, the AG's office noted, "Facebook adopted the policy unilaterally rather than comply with state campaign finance law."

But, as The Stranger demonstrated in early 2019 and throughout last year's election season, Facebook went right on selling local political ads in Washington state despite its supposed ban on such ads.

Thus, under state law, "any person" now has the right to get specific information from Facebook about the precise cost of each of these local political ads, who paid for them, how that person paid, when they paid, how each ad was targeted, the total number of impressions each ad received, and more.

As Facebook often mentions, it does provide some information about its political ads through a publicly accessible online ad library. But this library falls significantly short of meeting Washington state's strict, nation-leading transparency requirements.

In February 2019, after Facebook refused to make all legally required disclosures about the ads it was continuing to sell in Washington state, The Stranger filed a complaint with the Washington State Public Disclosure Commission, the front-line agency for enforcing this state's campaign finance regulations.

Later in 2019, Tallman Trask, a private citizen who'd independently sought local political ad disclosures from Facebook, filed his own complaint over the company's refusal to provide him with required data.

Facebook justified its refusals by arguing—"circularly," The Seattle Times noted—that because the company says it bans local political ads in Washington state, it doesn't have to follow state law when it does, in fact, sell such ads.

Additionally, Facebook has argued that it enjoys broad immunity from Washington's political ad disclosure law because of a controversial federal law passed in 1996. That law, known as the "Communications Decency Act," was not crafted with the intent of voiding a state's power to enforce its own election laws, but Facebook is invoking it here to that effect.

After extensive conversations with Facebook's legal team and a full year of quietly investigating the issue, the Public Disclosure Commission in February considered settling the current complaints against Facebook with a $75,000 fine, no required admission of guilt, and no promise from the company that it would comply with Washington state law going forward.

But a half-dozen campaign finance experts from around the country called this proposed settlement "dangerous and troubling," and soon the PDC scrapped it, instead voting unanimously to refer the matter to Ferguson for investigation and potential prosecution.

Ferguson's own attempts at investigating and tallying Facebook's recent ad sales, his office noted, have been made difficult by "Facebook’s widespread failure to comply with the law."

But the AG contends Facebook was paid at least $500,000 for ads it sold to more than 170 different political committees that have targeted Washington state's elections since November 2018, despite Facebook's supposed ban on these sorts of ads.

Ferguson will be arguing in court that Facebook "intentionally" violated Washington state law this time around, which would allow for the tripling of any fines a judge might impose on the company.

Once again, he's seeking reimbursement of the state's legal fees. Plus, this time he's asking for an injunction "requiring Facebook to maintain and make available for public inspection all legally mandated information for Washington political ads on its platform."

UPDATE: In an e-mail sent the afternoon of April 14, a Facebook spokesperson declined to offer any on-the-record statement but noted this is an ongoing legal matter that the company hopes to resolve by working with local authorities. The spokesperson also noted that Facebook's ban on political ads aimed at Washington state's local elections remains in place.