How Can America Fix Its Deadly Coronavirus Testing Shortfall? Patty Murray Has a Plan for That. 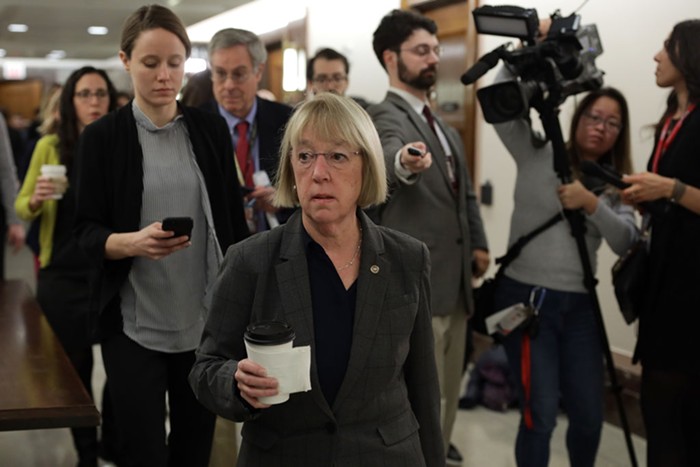 Washington Senator Patty Murray, entering a briefing on coronavirus. Alex Wong / Getty Images
The failure of the United States federal government to conduct massive coronavirus testing has left this country flying blind as the numbers of deaths and new infections continue to rise.

Earlier testing could have prevented loss of life and helped track community spread of the illness at a time when it might have been possible to contain it. More testing right now could ground the growing debates over social distancing in a fact-based, data-driven reality, rather than leaving them to play out amid a fog of emotion and political ideology.

But, says Washington Senator Patty Murray in a new white paper on testing, "the Trump administration has repeatedly failed to recognize the need for extensive testing to fight COVID-19."

Although Trump seems to be blaming social distancing for hurting the US economy, Murray's paper argues that the president is leaving out the massive failing that caused Americans to have to social distance in the first place: the testing fiasco.

"These missteps surrounding testing have resulted in the need for aggressive social distancing," the paper contends. That, in turn, has "upended the economy and American life."

Murray's paper concedes that any fix will require "the convening power of the federal government," and calls on Congress to essentially force the president to lay out a national testing plan, marshal the resources of the executive branch toward achieving that plan's goals, and then deliver results.

"Congress should designate $30 billion in new emergency funding to support the rapid expansion and optimization of testing for COVID-19 in the United States," the white paper says, and it suggests various ways of tying this congressional funding to transparency requirements and demands that agencies under Trump do things he might not otherwise direct them to do. (Congress, for example, should "require FDA to communicate to the public which available tests, including RNA tests, antigen tests, and serological tests, deliver reliable results," the paper says.)

In a nod to other challenges of the Trump era, the white paper also suggests Congress "eliminate opportunities for political interference in the testing system, including prohibiting the President, his immediate family, Cabinet members, and Members of Congress from benefitting financially from any component of the COVID-19 testing system."

Will this plan become reality?

Murray may be the ranking member on the Senate's Health, Education, Labor, and Pensions Committee, but it's Republicans who control the chamber, likely making it an uphill climb.

You can read Murray's whole plan here, or just check out her tweet-thread-sized summary, which begins here:

Health experts have made clear if we want to end social distancing & safely get people back to work, back to school, & back to some semblance of normal life—we will need hundreds of millions of tests. We need to make sure testing is fast, free, & everywhere.
— Senator Patty Murray (@PattyMurray) April 15, 2020