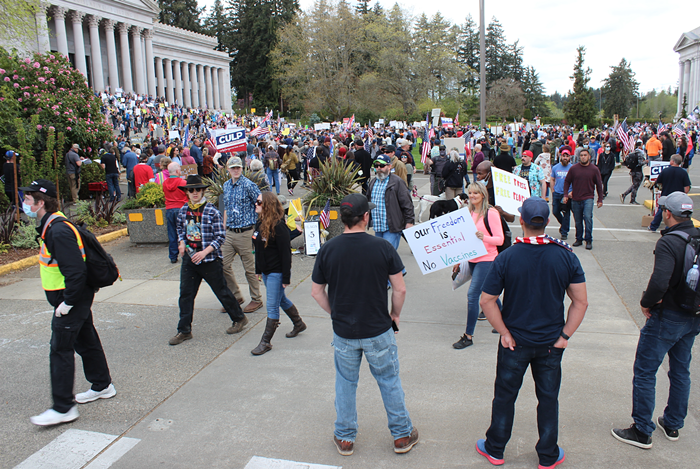 A crowd gathers too close for my comfort. Gregory Scruggs
On Sunday, Reuters sent me to cover Washington state’s anti-lockdown protest in Olympia. Ardent believers in “hazardous liberty” showed up at the capitol with a litany of grievances, from bans on seemingly innocuous activities like recreational fishing to outrage over what are "essential" vs. "non-essential" businesses to principled stances against restricting their right to peaceably assemble.

Approaching the several hundred clustered on the state legislature steps started to give me the willies about my own safety even while wearing an N95 mask.

I talked to a handful of people about why they chose to defy Governor Inslee’s Stay Home, Stay Healthy order. I genuinely wanted to know why they were flagrantly violating federal and state public health recommendations by choosing not to wear masks or practice much physical distancing.

Unfortunately, the ruthless editors at Reuters cut all that material out—my interviews with protesters—so I’m sharing those quotes with you here on Slog, especially since the Seattle Times didn’t seem to talk to any of the protesters, just elected officials. (KOMO did a decent job getting protesters on the record.)

My own anxieties about the danger these people pose to everyone else notwithstanding, the atmosphere was festive. I got the impression that for many it was a welcome break from lockdown-induced cabin fever. If I were to risk my life at a mass gathering right now, I’d take the Fremont Solstice Parade over a political rally crawling with anti-5G conspiracy theorists, but to each their own.

Cars and trucks draped with American flags and MAGA and Trump 2020 banners honked incessantly up and down Capitol Way. 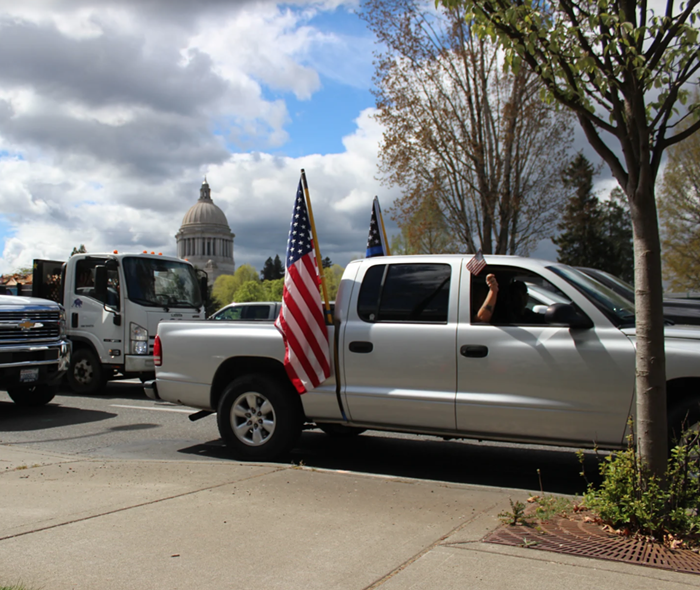 In addition to the protesters on foot, there was a lot of this. Gregory Scruggs 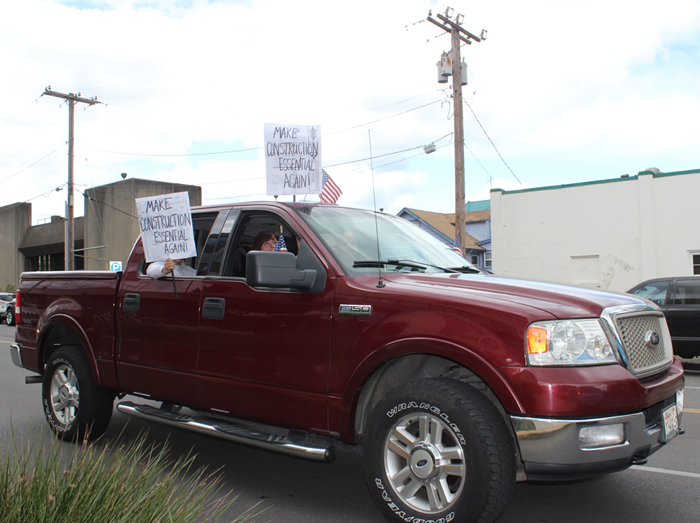 "Make Construction Essential Again." Gregory Scruggs
While it’s easy to brush these kinds of protests off as the work of nefarious right-wing puppetmasters, rally organizer Tyler Miller, a Kitsap County Republican precinct officer from Bremerton, insisted to me that he did not buy any ads to amplify his Facebook event nor did he receive any outside financial backing.

Yes, you can call people homicidal idiots for gathering in large groups in the midst of an unprecedented public health crisis, but no matter what you call them, a lot of people are fed up and not going to take it anymore. While polling still shows that these difficult emergency measures remain a popular if bitter pill to swallow, public health officials’ work is getting harder as there is a small but probably growing minority that disagrees enough to commit acts of civil disobedience.

Washington State Patrol officers were out and about, mostly on bikes, although according to spokesperson Chris Loftis, they issued no citations, even though violations of the governor's order are a gross misdemeanor. Loftis explained to me their strategy is engagement and education over enforcement. WSP dissuaded one group from setting up a stage, for example.

However, another group of folks, below, managed to set up a PA, and it was loud enough to attract attention, so some people did gather closer to this group, but I did not stick around to hear what they said. 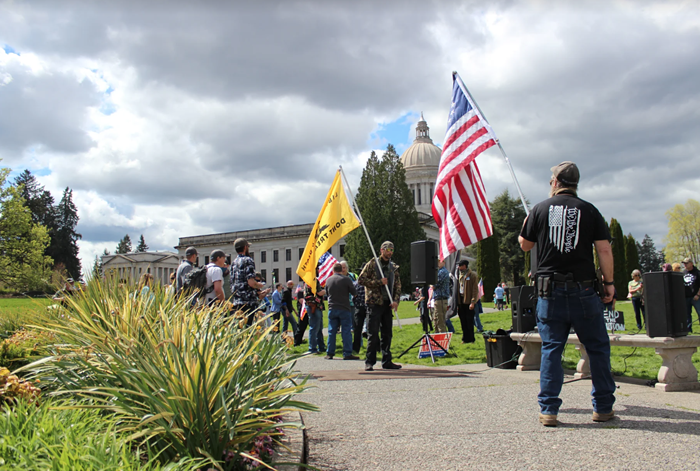 The PA was loud enough to attract attention, but not loud enough that you could hear it from far away, so people gathered more closely around these speakers. Gregory Scruggs
The 2,500-person crowd, according to a Washington State Patrol estimate, was among the largest at any protest nationwide over the last week. Do we have more liberty-loving, elderly-killing patriots in the Evergreen State than elsewhere? Or are ours just closer to the boiling point because we’ve been living in this coronavirus crisis a week or two longer than other places?

One possible motivator: The annual March for Our Rights gun rally scheduled for late April was postponed, so a large contingent of heavily armed Second Amendment activists who had planned to rally anyway at this time of the month showed up.

I met Ryan Kalmkov, a machinist from Olympia who said he's still able to work during the shutdown. He had an AR-15 assault rifle slung over his shoulder and a .357 magnum handgun on his hip. “Inslee not making gun shops and ranges essential does piss me off,” he said. 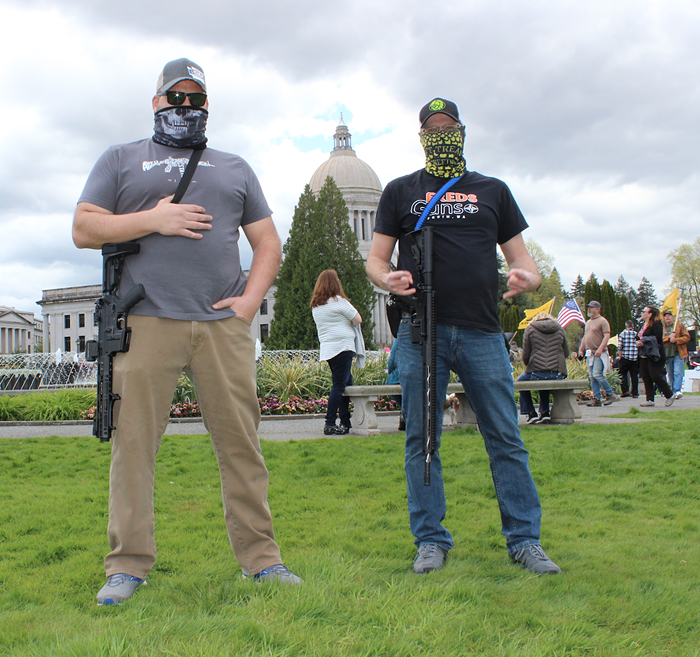 Ryan Kalmikov, right, poses with (in his words) his best friends: his guns and that guy on the left. Gregory Scruggs
I wasn't here to broadcast my own opinions, I really wanted to understand why these people were out here, so I tried to put myself in his shoes. If I lived in a red state that had banned abortions as a non-essential procedure and then the state’s biggest annual pro-choice rally was postponed, maybe I'd view it as a conservative conspiracy too. Maybe I would protest as well. Still, a woman's reproductive rights and a man's right to own a weapon to mow down large numbers of people do not seem like the same thing.

Logan Haylor, 24, is an apprentice ironworker from Kent who lives with his grandparents. The shutdown closed his hotel construction site in Seattle, but with only three weeks on the job, he hasn’t accrued enough hours to collect unemployment insurance. “My goal was to move out by the end of this year,” he said. “Jay Inslee took that away from me.”

Despite the risk of asymptomatic transmission, Haylor said he would be willing to go back to work tomorrow. As long as everyone washes their hands regularly and those who feel sick stayed home, he would feel comfortable returning to his grandparents’ home each night, he said, even though older folks are most at risk right now. 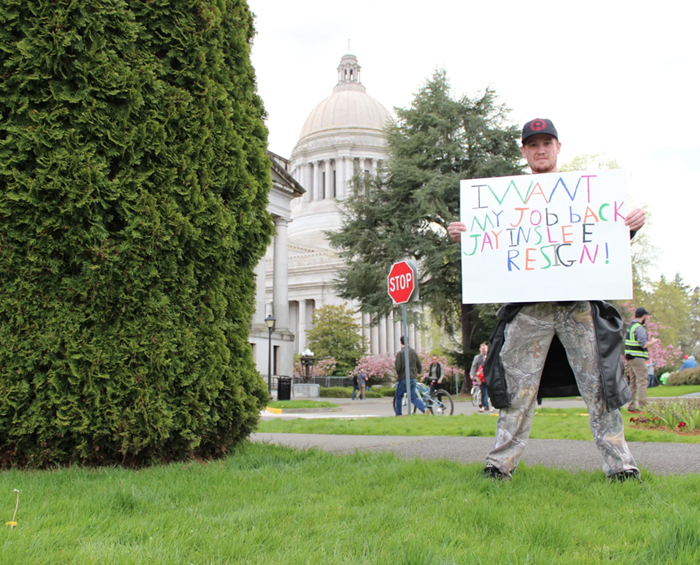 Logan Haylor can't work his construction job, and he hasn't accrued enough hours to get unemployment. He blames Gov. Jay Inslee. Gregory Scruggs
Seattle real estate broker and four-time losing candidate for 37th District state rep Tamra Smilanich told me she fears that an eventual vaccination will be legally required. “I’m worried that this is going to be so overboard that even at a real estate office they might want mandatory vaccination papers,” she said. “I do not want to have a vaccination to qualify for any kind of employment.”

Anti-vaxxers are known to cut across the political spectrum. Smilanich told me with pride how she cut up old "No on I-976" signs to make a "666" protest banner. I tried to snap a pic of the "666" banner, but she put it down when she saw my camera.

“If people know what 666 means, it’s just my visual aid to let people know I’m not interested in a vaccination and I believe in freedom of choice for your health,” she said. Apparently "666" is a reference to Bill Gates conspiracy theories? 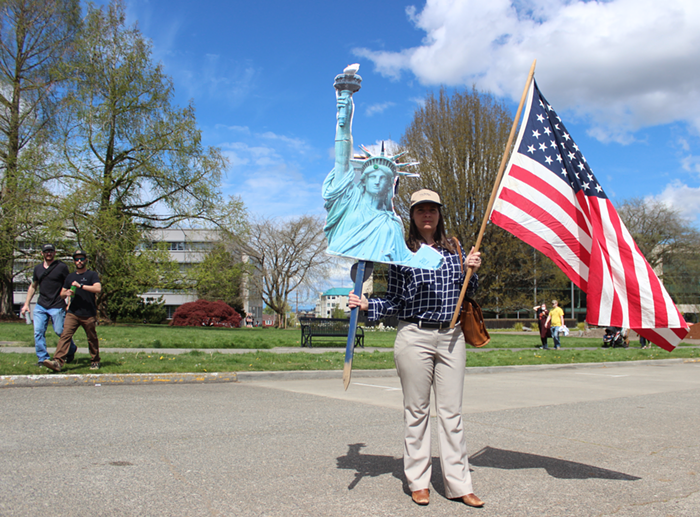 Tamra Smilanic put down her "666" sign before letting me snap her picture. Gregory Scruggs
We’ve got more than our fair share of anti-vaxxers in the Pacific Northwest, but effectively battling COVID-19 is going to require more than just a painful shot in 18 months (if we get a shot in 18 months). We will need to continue with quarantines, self-isolation, and physical distancing—no matter what these protesters say—and soon we must contend with beefed up testing, contact tracing, and serology. Will voluntary compliance be enough to keep infection rates in check or will mandated health measures spark open revolt by a heavily-armed populace? There is a long history of popular uprisings against public health restrictions during epidemics. Chafing at non-essential business closures could be just the beginning.

The most sympathetic person I talked to all day may have been Beth Jump, a stay-at-home mother of three from Redmond. She described herself as someone politically neutral who leans conservative but is not the protesting type. The shutdown got personal for her last Wednesday when Lake Washington Vascular in Kirkland canceled an ultrasound to examine a blood clot in her 19-year-old son’s knee caused by deep vein thrombosis. He’s been on blood thinners for 90 days but the medical facility considered the follow-up diagnostic test a non-essential procedure. “I’m here because my son could die,” she said.

Amidst real hardships—economic and medical—crashing into a frayed social safety net, I fear any semblance of solidarity from the first month of this national emergency is quickly evaporating. Especially because the general public is at best skeptical of science and at worst outwardly hostile to it. And because the White House, and local Republican leaders, openly encourage people to flout public health measures.

Large gatherings like yesterday's protest create thousands of possible vectors for the virus to spread, including to older and more vulnerable people who chose not to attend the rally. I followed up with Miller, the Facebook event organizer, today by text to ask how he squares his belief in individual liberty with our collective responsibility to limit the spread of a highly contagious, sometimes lethal, respiratory disease.

He said, "I don't feel any responsibility, to be honest. I did as much as I could to put out recommendations and encouragements, and every person who showed up did so knowing all of the risks involved."

He also said, "Can I predict and say for sure that no exposure or spread happened? Of course not."

Comments 51
Tags: News Coronavirus
The Stranger depends on your continuing support to provide articles like this one. In return, we pledge our ongoing commitment to truthful, progressive journalism and serving our community. So if you’re able, please consider a small recurring contribution. Thank you—you are appreciated!
CONTRIBUTE NOW