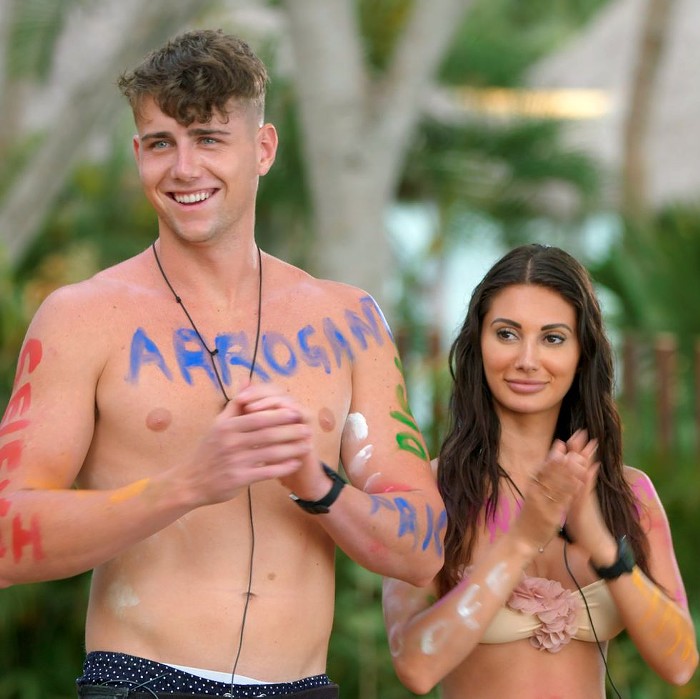 Too Hot to Handle's "villain" couple Francesca and Harry during a body paint challenge. Tropes that I hope to continue to see. Courtesy of Netflix
In February, Vulture's Josef Adalian pointed out in his newsletter covering the streaming industry that Netflix had all but cornered the market on reality television shows. Testing the waters with shows like Queer Eye and Nailed It! in 2018, in the past several months the streaming behemoth has broadened their original reality programming to include cooking and singing competitions (Cooked with Cannabis and Rhythm & Flow) and "high" and low concept dating shows (Love Is Blind, The Circle, Too Hot to Handle) to widespread buzz and memeification on social media.

This concerted push into the reality sector happened to coincide with the coronavirus pandemic, with tens of millions of people across the globe being forced to spend nearly all of their time inside without a job or (non-anxiety inducing) outdoor activities. Until yesterday, I was one of those people.

After being laid off as a staff writer here at The Stranger in March, I was one of the then historic 3.3 million Americans who filed for unemployment. Floating around in potentially interminable unemployment purgatory left me with inordinate amounts of free time for my mind to wander (and obsessively worry). So, of course, I settled in to watch some television. Prestige dramas like the layered Devs, an FX-on-Hulu original series by Alex Garland, that I had loved while employed couldn't hold my attention. I lasted about 20 minutes with The Wire. Even a Succession rewatch bored me. Nothing that gave me comfort in "The Before" times was as shiny and stupid and horny as I wanted.

Enter Too Hot to Handle.

too hot to handle is perfect numbing smooth brain content

For those of you unfamiliar with the concept of smooth brain, I’d like you to envision a brain free of wrinkles; small, pink, reptilian, uncomplicated, easily distracted. This is the brain I assume Netflix’s reality show producers are catering to with their onslaught of reality programming—especially their dating game shows like Too Hot to Handle.

The show is centered around ten "hot" and "sexy" straight single people from around the English-speaking world with deep commitment issues, who are brought to a trashy resort under some sort of guise that they'll be sexing the summer away (these are the type to not ask any questions). But they are in for a rude awakening when their A.I. host Lana (???) forbids them from kissing, heavy petting, and fucking each other for the duration of the show in an effort to teach them how to have empathy and create long-lasting relationships. Any sexual contact comes with a deduction from the show's collective prize money.

Of course it's terrible. There are many drunken confessionals. The lesson the show tries to impart on its contestants makes them seem like sociopaths and is so low-key puritanical that I had to look up if the production company is Christian (it's not, but the show is based on a Seinfeld episode which is even more unbelievable). Peak smooth brain content, indeed.

While I strongly believe in turning toward dark, twisted art in times of darkness and twisty-ness (suggestion: go give Safe a watch then email me how you feel), I think these times also call for some sort of dumb, vapid balm to retreat into, every now and then. Watching a bunch of 20-somethings similarly confined to a house, forced to create unsteady emotional bonds with each other, all while having to remain abstinent feels too familiar. It's a warped and condensed look inward—a confinement drama, if you will—even if the contestants are seemingly incapable of meaningful self-reflection. Strangely, I found myself empathizing with their (petty) frustration in a way I found myself unable to do in "The Before" times.

Although the pandemic might halt the production of these reality shows for the time being, smooth-brained reality shows aren't going anywhere. And honestly, thank God for that.